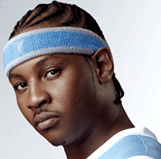 People’s Champstigator Lang Whitaker sent me this link to Carmelo Anthony’s itunes playlist. Taste in music is subjective and everyone is entitled to their own opinion. But Carmelo is a public figure, and public figures must be judged and held to a higher standard. Let’s criticize his picks:

I Luv It 4:00 Young Jeezy The Inspiration (Bonus Track Version)

Bam! It’s not “Bury Me a G”, which is the greatest rap video in a long time (and a complete Tupac rip-off, but I’m not complaining) but this is a good start.

Show Me What You Got 3:43 Jay-Z Kingdom Come

Yawn. Beer commercial music. Corporate rap. I respect Jay-Z for stepping down from Heineken to Budweiser though, which is something I am too snobby to do myself.

I don’t listen to any Fat Joe since Jealous One’s Envy, which is one of the finest albums in the history of music. Listening to Fat Joe the past few years when he’s talking about spending money and partying and having fun is blasphemous to me. I can’t listen to this song.

This song is preposterous on so many levels. No Romo.

I’ve been upset about this song for many many years. Jadakiss is a nice rapper, who puts out the image of being this sick kingpin gangsta, and then this song comes along and it’s one of those heartfelt stories of how the L.O.X. made it and he talks about growing up rich and being lazy and all of this stuff. It lets you know that rap identities are characters much like wrestlers. Great song though.

Runnin’ 4:26 The Game The Documentary

Tony Yayo steals this track from The Game. And I’m a guy that bought a Re-Incarcerate Yayo t-shirt from straight bangin. Seriously though, “D’s want my head like the chick in Kill Bill.” If that’s not a direct quote it’s because I haven’t listened to this song in over a year, though I used to on a daily basis. (Ok, I’ll make the joke. This is Carmelo’s theme song for what he does after slapping someone on the ear)

A little too mellow for me, Melo. I expect better from T.I., but not from Jamie Foxx.

Another good choice. Yes the need for acknowledgment from Dr. Dre is almost as troubling as Stuntin’ like my Daddy, but still a good song. The remix is about 2 hours long with every rapper on earth on it. Hilarious line from Juelz on there “I live the street life/you live the sweet life/MTV, Laguna Beach”

By Your Side 3:51 Jadakiss Kiss of Death

Eh. I get it, you rap and let the singing finish every line. That’s whatever, but after One Blood, can’t do it two songs in a row.

I guess I’m legally obligated to like this because unlike Busta Rhymes, I’m from New York. He’s from Uniondale, Long Island. Which is technically New York, but not really. Bring back the Leaders of the New School!!!

Where I’m From 3:08 The Game The Documentary

Carmelo Anthony apparently only listens to 4 or 5 rappers. This is getting boring.

Been Through the Storm 4:07 Busta Rhymes The Big Bang

Okay, I’ll admit it. Busta Rhymes is my least favorite rapper alive. I hate him and I can’t like any of his music, even if it’s good. I’m sorry.

And that’s Carmelo’s playlist. I guess this is why Bill Simmons is scared to make a playlist, cause people will hate and argue just for the sake of hating and arguing. But you know I’m 100% correct about every little thing on here.