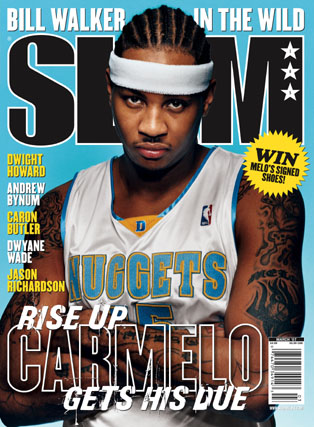 Let’s just say that taking a cheap shot at Mardy Collins wasn’t the kind of “rising up” we had in mind when we put Carmelo on our upcoming cover. This cover will be hitting newsstands nationwide this week, and thanks to the wonders of old-fashioned printing, there’s nary a word about Melo’s involvement in the fight.

We talked for a bit about downplaying this issue on the site, but what would that do? Odds are if you’re on this site in the first place, you at least like how Melo plays, and we got that for you. We’ll stay on top of the suspension coverage for sure, and Ryan will have some behind-the-scenes details from writing the cover story on his blog by tomorrow, but in the meantime we suggest you scoop up this issue as soon as you see it. The rest of the nation and its pack-mentality media will be making Carmelo a pariah; this issue will be a reminder of those simple days before Saturday when he was merely the leading scorer in the NBA.