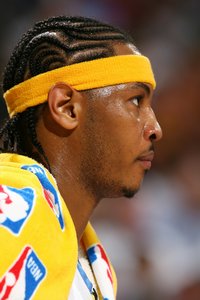 It has been a rather forgettable year for Carmelo Anthony. Following his great success on Team USA last summer, little has gone right for the soon-to-be 24 year old.

Despite their talent, Anthony’s Nuggets barely made the Playoffs, and once there, they absolutely stunk up the joint. There was the humiliating DUI arrest just before the season ended, and now, he’s got another (albeit, minor) legal matter to deal with.

The good news for ‘Melo is that he will not have to appear in court and can just pay the ticket through the mail.

Word of advice to Carmelo Anthony: Disappear for the next few months, and hope that everyone forgets what an absolute nightmare this season has been.