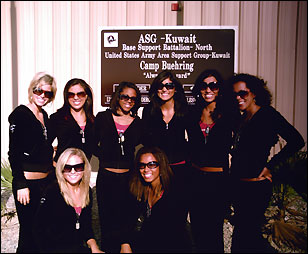 Peoples Champstigator Lang Whitaker has directed my attention to the official site of the Cleveland Cavs.

So… the Cavalier girls are travelling to Iraq and blogging about it. There’s not much more I can add to this other than to give you some of my favorite excerpts.

We saw some camels just chilling in the sand like it was normal, but to us it looked so crazy! When we arrived at the base we were first introduced to some lieutenants and commanders and they talked about what they did on the base and they then presented us with some gifts (certificates, coins, and patches).

Some of the girls are playing through pain:

I was a little upset at first, because I could not dance all the dances because of my injury, but my spirits were still so high!! It was so much fun getting up there and having a crowd like we did!!
And this really gives you some perspective on the war:

After that, we got off in Kuwait only to find they had lost mine and Vandana’s luggage. Ahhhh! Talk about freaking out.

I don’t have a greater point to make here other than to say that I find this all very amusing. And don’t be fooled by that photo. There will not be an ASG in Kuwait. Well, they are having it in Vegas…