Cleveland's 2015-16 bench might be the best that LeBron James has ever had. 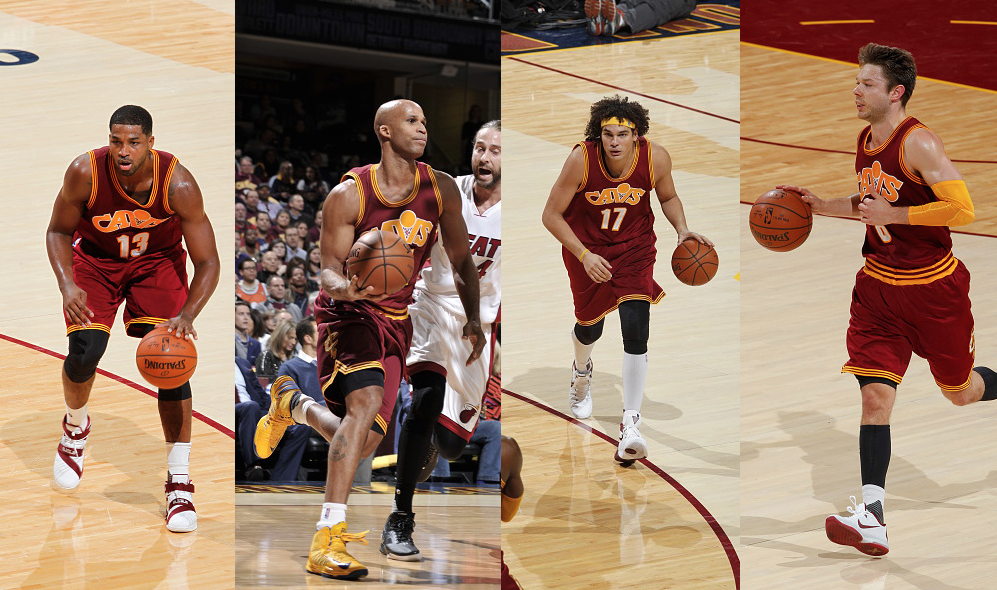 The Cleveland Cavaliers’ bench unit is now a weapon for the defending Eastern Conference champions. That’s the biggest difference and most glaring improvement for the team that LeBron James willed to the brink of an NBA title last season. Even with Kyrie Irving and Iman Shumpert currently sidelined, the Cavs’ reserve group has helped extend leads and secure victories against quality opponents thus far. A year ago, that’s not something we could say about the second-best team in the League.

During the 2014-15 campaign, the Cavaliers bench ranked last in the League in scoring at 23.8 points per night. Their -8.8 efficiency difference according to HoopsStats.com also ranked 28 out of 30 teams. In two wins against the Miami Heat and Memphis Grizzlies so far this season, however, the Cleveland reserves have built a combined advantage of 82-48.

“It could be the best,” longtime NBA veteran Anderson Varejao told SLAM, when asked if this was the deepest and most talented bench he’s played with in Cleveland. “I feel pretty good about our bench, it could be. We had some good teams in the past, but I feel like this is one of the best we’ve had.”

While the near record-setting totals in payroll that Dan Gilbert and the Cavaliers (2-1) are shelling out may make that statement seem likely, it’s worth noting that Varejao was a part of five LeBron-led playoff teams prior to last season from 2005-10. In 2007, a second unit anchored by Varejao helped James and company advance to the Finals. But none of those LeBron James Cavaliers teams had anything close to this much talent in support of the starting five.

“We are just moving the ball, making shots and playing good defense,” Varejao added. “We have some vets on that second unit who know what it takes to win in this League.”

In Richard Jefferson, Matthew Dellavedova, Tristan Thompson and Jared Cunningham, the Cavaliers have four bench players who have scored double-digit points during at least one of Cleveland’s first three games. Varejao also went for nine against Chicago, while backup point guard Mo Williams is filling in for the injured Irving by averaging 11.3 in a starting role. Last season, only two bench players (Shumpert and Thompson) averaged more than 4.9 points per game for the Cavs.

“Our bench is going to be big for us all year,” LeBron James has said. “We’re very strong on our bench. When we go to our bench, you just really want to continue the momentum and make it even stronger. Once again [against Miami], they came out and they played great ball.”

Along with the statistical production, the Cavaliers are also coming off the bench making momentum-changing plays that have sparked the whole team. One example was Thompson coming across the lane against Miami to meet what appeared to be an easy Chris Bosh dunk at its highest point and sending it away at the rim on Friday night.

That's how you protect the rim! Tristan Thompson with the huge 4thQtr block on ESPN! #NBARapidReplay https://t.co/pLcaWyVv4L

“It gives the team more energy when you play hard out there and block a shot like that,” Varejao explained. “He was right there dunking the ball, and Tristan came from nowhere and blocked the shot, it just gives a lot of morale to the team.”

The energy and production should combine to result in less wear-and-tear on James, Kevin Love and the rest of the Cavaliers starters during the regular season. While it’s extremely early, the 33.7 minutes that James is currently averaging would project to be a career low. Meanwhile, Love is averaging less than 33 minutes himself while turning in some of the most productive basketball (19.7 points, 11.7 rebounds) he’s played, through three games, since his arrival in Cleveland. With the return of Shumpert and Irving, and shifting the backcourt of Williams and JR Smith to the second unit, it’s reasonable to think that LeBron and Love’s minutes could be much closer to 30 per night than they were last year.

“I think we’re very deep,” Williams says. “I think our bench, including myself because I’m a part of that when Kyrie comes back, we have some good players. Players that have started games or could start games and play at a high level. Play multiple positions and extended minutes if need be. It’s great to have that and I think that’s what makes us as good of a team as we are. We have guys that come off the bench that play at a high level.”

The Cavaliers’ second unit is also versatile. When at full-strength, Williams, Smith and Dellavedova are three guards who deserve minutes in support of Irving and Shumpert. They also have the option of bringing in Varejao, Jefferson, James Jones and potentially even Cunningham to play anywhere from two to four guards along with a legitimate center depending on what the matchups dictate.

“Last year, if you remember, a lot of times we would talk about the fact that we started off with a 20-point lead and then the bench had to come in and sort of hold down the fort,” Cavs coach David Blatt told the media recently. “That’s what we wanted [last year]. Now, we want our bench to be a source of advantage for us, and I think they’re doing that.”