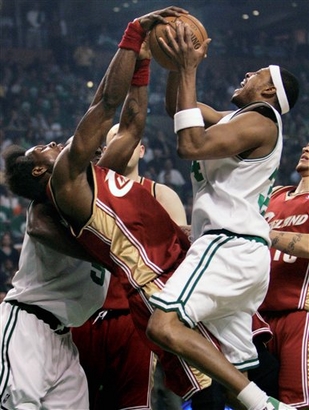 –On Saturday night, I had some delicious Forrest Berry pie. The following afternoon, with two minutes left in the fourth quarter of Game 7, I ran into the kitchen and cut myself a slice of leftover pie. There was no way I was going to watch the last two minutes of that incredible game without some pie. Sometimes you want your epic Game 7 and you want to eat it, too.

–As much as the home away from homer in me wanted to see the Cavs pull an upset, this seems like a logical progression for LeBron and co. They fought hard, have nothing to be ashamed of, and look to be on the cusp—second scorer still needed—of glory. They were one clutch shot—DJ, live and brick from the corner; Sasha stepping ill-fatedly on the line—from being able to put themselves in position to deliver a knockout blow. Anyone else thinking Boobie’s absence made a huge difference? They needed a knockdown guy to space the floor and unclog the lane and they just didn’t have him on Sunday (though kudos to Delonte West in all of his creative glory and admirable will power).

–With the Celtics and Pistons a year older and the West wide open and beating the crap out of itself, I don’t see why the Cavs can’t win it next year. Yeah, I said it. Sure, the roster is overpriced and there isn’t much G-Managerial leg room. Still, the Cavs, health-permitting, will always be able to Team D up and that is criminally underrated in May and June. Hell, had they won yesterday, you know they weren’t going to lose to Detroit—the whole thing seemed set up like dominoes. (In truth, I was hoping for CLE-LA, mostly for Sasha vs. Sasha, both looking for the vic). Anyway, the Cavs have defensive structure; they just need another layer. If championship basketball is a house, the Cavs have most of it (LeBron&defense) in place. It’s hilarious to listen to the national pundits wet themselves because LeBron could sign elsewhere in 2010. They jump on the team’s weaknesses, and all of a sudden the average couch potato is sitting there arguing like the team got swept. Fellas…screamers…this is Cleveland basketball, not extreme makeover ho edition.

Plus, the Cavs, as currently comprised and with minimal tweaking, will always be a more dangerous in the playoffs than in the regular season.

–After game 1, I wondered if the Cavs really blew their shot at a game in Boston that was theirs for the taking. Bron’s seemingly inconceivable 2-18 was reverse reminiscent of Reggie’s 8 second Game 1 takedown of the ’95 Knicks, who, despite the meltdown, were still a Patrick Ewing finger roll away from a ECF matchup with young Shaq/Penny. The roles were reversed in this series, but the hard fought grind it out nature was the same.

–Pistons-Celtics. Celtics in 7. Because sometimes it just is what it is.