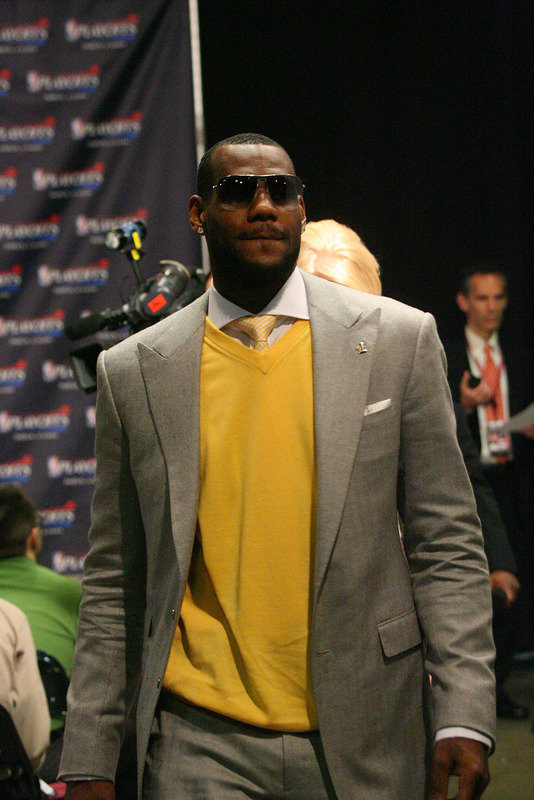 Sam and I missed the first quarter due to heavy NYC traffic flow and because the Nets bungled his credential request for a second time in these Playoffs. Even so, we barely cared when we realized what we’d missed: A whole lot of bricks from VC and Larry Hughes and an odd silence from LeBron, who only launched one first quarter shot. It was like human DVR: we fast forwarded the first quarter in favor of Sam’s entertaining road rage, classic Big L, good conversation and some CAA lobby patience.

In fact, let’s human DVR the second quarter as well.

–After Mikki Moore and Sasha Pavlovic get into a little tiff, Sam goes straight to the jungle book metaphors, saying that Pavlovic is the mongoose to Moore’s snake. “The jungle book was big in my family,” Rubenstein concludes.

–Jeff from Inside Hoops on Jason Collins: “There’s a Size vs. Suck factor and Collins sucks so much that it totally negates his size.” Or mathematically put:

(Holy crap. Hopefully, you’ll look at that equation long enough and have the same epiphany that I just did.)

I should mention that Collins is a good post defender and sometimes I wonder if we just pick on him because he’s like the kid in second grade that can’t stop picking his nose (his lack of an offensive game equivalent to the excess boogers in this analogy).

–The Nets “Live and let Larry” defense suffers in the third when Hughes starts connecting. This opens things up for LeBron who decides, with his man Jay sitting courtside, that this would be a good time for a TAKEOVER, continuing his excellent play from the second quarter. (And yes, the takeover line was an exercise in lameness.)

–Despite his shooting woes, Vince Carter has been doing a great job of finding Mikki Moore in the third. The funny thing about this is that, not only is Moore taking Vince’s passes, he might also be taking some of his off-season money in the process.

–Kidd is struggling from the field. I say we retire the ASON Kidd when he’s missing and just run with Mason Kidd. Two reasons: The Free Masons were a society that many consider to be “esoteric.” Kidd’s game is esoteric in that only a certain sect of the basketball watching population truly understands its brilliance–and Kidd is still brilliant even when he’s off. And if masons laid brick, how better to honor iconic Bricklayers like Dean Cain and Bill Bellamy (or were they Violaters?!?!?!?!). One played Superman and the other has a history of keeping it gangsta. Yeah, that’s the perfect positive spin for J-Kidd.

–Through 3 quarters the Nets top four offensive threats (the Big 3 and the Boston Snackbar) are a combined 11-41. To say Mikki Moore’s 9-12 has saved them is an understatement. Their offense is having a heart attack and he is their in-ambulance adrenaline-laced epi pen.

–Here’s an analogy straight from the SAT’s: Jason Kidd is to rebounding what a German Shepherd is sniffing bombs.

–5:19 left in the fourth. Lynard Skynard’s “Simple Man” blares over the loudspeaker. This is apropos for Kidd, not so much for VC.

–Richard Jefferson has missed three dunks in the second half. Any basketball-watching camel will tell you that those are three heavy straws.

–LeBron is complaining about his first personal foul late in the fourth quarter. Come on, dude. You’re better than that.

–Both teams are missing free throws down the stretch. The crowd is really into it, much improved from Game 3 and enhancing my theory that day crowds in general just pale in comparison to night crowds.

–With the Nets down two and time running out, Vince looses the ball. You saw it. We’ll talk about it in a minute. Jersey loses a heartbreaker.

–The home media is kind and brief with Lawrence Frank. Basically they just ripped the verbal band-aid off and got on with their lives.

Frank diagrams the final play for us: Put the ball in the hands of your best threat, Kidd and Jefferson in the corners, Boki on the wing, Mikki at the hash; let your best scorer go to work.

How you trust Vince in that situation—and I’m not just saying this in 20/20—I don’t know. He’s 6-23 so far for the game and he’s often prone to not taking the best shot available. Plus, they’ll stick their best on the ball defender (Snow) on him and if he doesn’t get the ball in the right position, the physicality which won’t necessarily be called could be the difference. That’s what happened.

And he ended up with his back to the basket, which in esssence helped the Cavs team defense. TERRIBLE.

Why not specifically design a drive and dish to RJ? There’s a huge chance you get at least 2 free throws out of that. Maybe going to RJ only works against Toronto. Maybe Frank was dissuaded by RJ’s inability to finish around the rim tonight. Whatever the reason, he chose the predictable route which yielded a predictable result in the eyes of cynics near and far.

–Mike Brown’s turn. He walks up and immediately proclaims, “That was a playoff game.” Indeed, Coach.

–LeBron and Larry Hughes strut up to the podium. LeBron is in full Business LeBron mode (sunglasses indoors?). He has a handkerchief in one of his suit’s 37 breasts. STEE-LO. Sam notes on the walk back to the car that he looks like Hughes’ dad.

I ask him something for a project I’m working on that you guys should see at the end of the week. It’s completely unrelated to the game. Thankfully, I catch no icy glares, perhaps because I waited 5 minutes before asking my unrelated question.

–Vince and J-Kidd enter, Kidd perhaps serving as Carter’s emotional muscle. Carter looks distraught and acts laconic. Kidd looks completely bugged out yet he oozes the same eerie calm as always. I half expect him to whip out a chainsaw and destroy the podium table in a fit of absolute rage. He does not. So we leave early.

On the walk to the car Sam calls his girl and tells her, “I have to watch Heroes when I get home, so don’t disturb me.”

Bottom lines: LeBron brought his A game; Jersey’s big 3 shot 11-48; Jefferson missed three dunks; The Nets didn’t have a field goal in the last 7 minutes of the game. The fact that the game was even there at the end for the taking is a small miracle.

As for Vince Carter, he may just not be that dude. Surprised? Me neither.

Is Jersey finished? We’ll find out on Wednesday.

(By the way, not to toot my own horn or anything–TOOT TOOT–but I called out Vince after a win in game 3 because I said that Kidd wouldn’t shoot as well and that LeBron would respond. Vince’s answer was 6-23 and a game ending turnover. The contract year performance theory is TURNING OVER in its grave.)