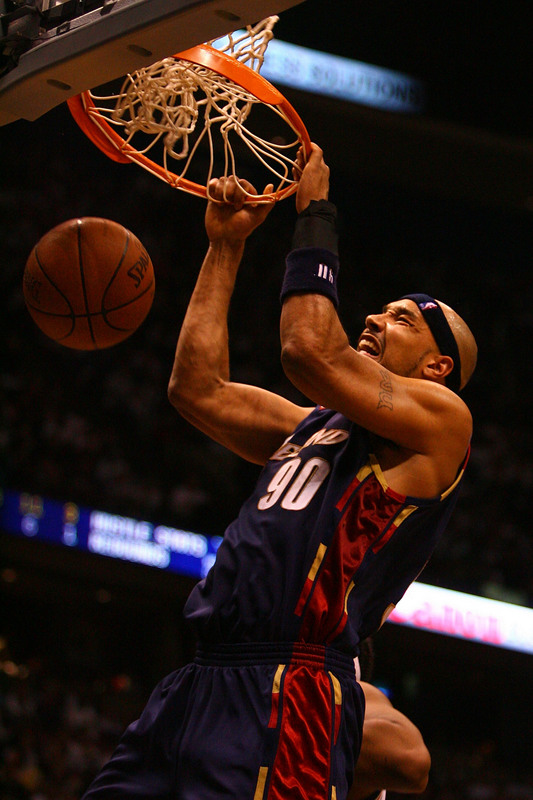 Vince Carter sits at his locker. He’s only wearing a wife beater and some black shorts. Unless he’s an amazing actor, the anguished look on his face tells more than any words possibly could.

Honestly, the Nets, for what they were, had a fine postseason. The better team won the series. I won’t be surprised if the Cavs shock the world in the next round either.

–Richard Jefferson starts hot, scoring Jersey’s first six points on two nice drives and a midrange jumper. Right after I write that he goes baseline for a pretty reverse.

–LeBron too has gotten the message of high percentage shooting after Game 5’s abysmal fourth quarter, slicing through the lane impressively twice in the first few minutes for pretty finishes.

–The “Live and Let Larry” defense early on? Well, Hughes isn’t cooperating, but when he finally gets the opportunity to shoot (at the line), he bricks both.

Vince: Vince Carter: Superstar who has all the talent in the world but loves to let his “principles” (or lack thereof) get in the way.

ARI: Jason Kidd: Brilliant. Makes the show what it is. Does all that he can to make Vince the best he can, with varying results. Has a way with women.

Drama: Mikki Moore: Once thought to be washed up, now perhaps blossoming into a star.

Turtle: Jason Collins: Good at defense (of/for his friends). Can drive a car and wear shoes.

–Drew Gooden is putting in work early, hitting 3 of his first 4 and showing some nice dexterity around the rim.

–The Nets go cold and the Cavs keep attacking. A sick LeBron 3 point play in which he hung in the air for what seemed like forever before kissing a fadeaway off the glass puts Cleveland up 14.

–Marcus Williams is pressing. He visibly tries to change his elbow angle as he’s going up for a shot, shortarming it.

–The Nets Over 60 dancers have their age on the back of their jerseys. Big ups to numer 83. You go grandma.

—All of the Nets shooters are cold and they all look to be measuring their shots. The loosey-goosy nature of the team has vanished with the pressure of potentially winning the series. On the other end, Donyell Marshall drills two 3’s to put the Cavs up 22. We’re not even 15 minutes into this game. It’s a 28-7 run.

–Honestly, right now (2:13 left in the quarter), the Nets are forcing me to question how hard it is to actually make an NBA jumpshot. Is it that hard if your jumper isn’t your primary weapon?

–The Nets’ first sign of life comes at the first half buzzer as the Boston Snackbar drills a 3, waking up the understandably lethargic crowd.

–So much for the Nets getting back into it immediately. The score hasn’t changed in the first minute and a half of the period, though they have drawn 2 fouls on LeBron and 3 on the Cavs.

–Kidd has scored 6 points in under two minutes since the aforementioned mini-drought. Unfortunately for the Nets, Z and Drew have responded with jumpers of their own. 7:42 mark: 13 point game. At least the crowd is into it.

–LeBron picks up his FOURTH. That’s 3 in 5 minutes. The foul negates a Vince 3, but it could be more beneficial in the long run.

–Jason Kidd must have baked himself in an oven at halftime. There’s no other explanation for the fire that has become him. Nine point game. The Cavs miss again and then JASON COLLINS bricks a jumper.

–It’s a three point game thanks to Mikki Moore free throws, an RJ layup and a VC follow-dunk. The Nets are running and the Cavs have gone so cold I can’t even describe the frigidity. And I’m getting fidgety. Bust it.

–My dad just called me and told me that Mark Jackson said the following on TV: “The way LeBron James is biting his nails, he should be playing for the Clippers.”

–J-Kidd cuts the lead to 1 with a left handed layup from the right side of the lane.

–An Anderson Varejao baseline hook shot helps the Cavs avoid tying the Nets’ dubious record for least points scored in a playoff quarter. For those of you with short term memory loss, they did that on Wednesday night.

–A T-shirt flies over into the media seats and lands directly behind Rocky Mountain News Nuggets’ reporter, Chris Tomasson and I. We both turn around and reach for it, bumping heads in the process. Awesome.

–A Damon Jones cameo. He doesn’t take a shot, but as LeBron noted after the game, you have to respect him because he helped spread the floor. I guess that’s accurate.

–Kidd airs the 3 that would have given the Nets the lead. Complicating things for Jersey, Boobie Gibson milks an ISO with VC for all its worth, using his speed advantage to slice to the rim and hit a floater.

–Larry Hughes is 1-6 from the floor. At this point would you rather see a movie called Shooter starring Mark Wahlberg or Larry Hughes? I’m going with Hughes just because I think the story would be more compelling.

–Vince Carter commits his fifth turnover by throwing a weak bounce pass in the lane. That’s probably his third of that variety.

–Gibson hits a three. He’s definitely off breast milk. And the Cavs are up 4. Donyell Marshall follows with a three of his own and suddenly it is a 7 point game.

–The momentum has swung back to Cleveland. The Nets are relying on the guile of Kidd to get them anything they can, which is tough because he’s lost his fire. The Cavs defense has clamped down on Jersey’s other starters, making it tough for the Nets to get much of anything. This in combination with Vince’s crumbling confidence is nothing short of a late-game disaster for the Nets.

–Boobie Gibson drops the nail in the coffin with another wing 3. A LeBron 3 from that same spot lowers the coffin into the ground. 83-67. 3 minutes left and the building is emptying out. In what could their final game as Nets, the Big 3 and Moore receive next to no ovation because the majority of the fans care about beating the traffic more than anything else.