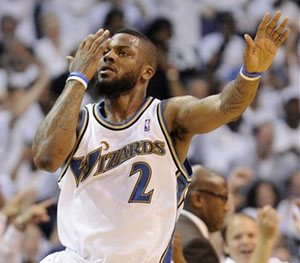 I once again missed the first half last night, as my evening do-the-dishes-and- put-the-kid-to-bed routine does not jibe well with these early tip-offs. I turned on the game a few minutes into the third quarter, saw the score, and wondered if my contacts had fallen out of my eyes… but no, that score was correct. The first game action I actually saw was DeShawn doing his Ray Allen impression from 25 feet. Good for him.

I watched until early in the fourth, on the off chance the Cavs could get it down to 15 and maybe make it interesting. They did not. I went to bed.

What do I think? It’s good you asked.

I think the outcome makes perfect sense. I’m constantly amazed at how short people’s memories are, and that certainly goes for NBA fans. This sh*t happens every year — a team goes up an easy 2-0 in the first round, and we all think “series over,” and then the lower seed wins Game 3, and we all go, “Woah, wait a minute, what happened?” Not all of us, but too many of us, and I’m not immune myself. We should know better. But I’m sure we don’t, and we probably never will.

Anyway, based both on historical precedent and the nature of these two teams, last night was a pretty logical outcome. LeBron went off in Games 1 and 2; the Cavs were playing at home, where they’re very tough to beat; and the Wizards had their heads farther up their collective ass than even I imagined was possible for a team that has Rhodes Scholars like Brendan Haywood and DeShawn Stevenson. So of course Cleveland dominated. It wasn’t really that hard.

Game 3, of course, was in Washington, meaning the Cavs were on the road — which I should probably refer to as The Road for how abysmal Cleveland is away from The Q. Also, we’re once again reminded that LeBron has next to nothing to work with. Yes, he’s got some guys who can do some things, but he lacks a single great teammate, or even, I’d argue, a consistently really good one. No matter how well LeBron’s playing — and he was still pretty good last night — that reality will sure as sh*t catch up with him over the course of a playoff series. And so it did last night.

The Cavs should still win this — we all know the stats about teams that start out 2-0 in a seven-game series — but at least we’ve regained perspective. These two teams aren’t far apart in overall quality, and there was never any reason to think this series would be lopsided. I know what WON’T happen in Game 4: The Cavs won’t win in a blowout. But they might still win it, and it’ll be close if they do. Or the Wizards will win a close one, or the Wizards will win handily. Those are the three allowable options. Feel free to take that insight to the OTB.

Beyond that, I’ll reiterate what I so adroitly pointed out in my series preview: This series doesn’t matter. It’s been relatively entertaining, for reasons both good and bad (and to all of you, especially my homie Mr. Bankston, who weren’t really bothered by the Haywood foul: Doesn’t the fact that you’re agreeing with Reggie Miller drive you insane? Because it should). But it doesn’t matter, because both of these teams are far too flawed to give the Boston Celtics the slightest bit of trouble — sure as hell not the Wizards, no matter what any of you have previously committed to internet posterity.

All that said, I’ll once again cop to my Wizards-in-6 prediction. I don’t think it’ll happen, and I’m not sure I ever believed it in the first place, but I’m on record, so there it is.

I think I completely misread the DeShawn hand-in-face shenanigans, didn’t I? I initially thought he was just blowing his fingers like “I’m hot,” but apparently he was doing the “You can’t see me” dance. Am I right? I’m so confused. This is what I get for watching playoff games one quarter at a time.

Just to clarify, though: Whatever DeShawn is doing, he is, and will remain, a massive, pitiable clown.

“Over-rated!” Hey, who am I to argue? An arena full of people wearing white and chanting in unison has never been wrong before.