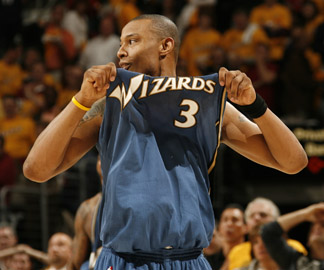 As if this series wasn’t already annoying enough.

Anyway, back by a complete lack of popular demand, here’s this:

LeBron James is Barack Obama: Seemingly destined to reach his ultimate goal, but things keep getting in the way. His inability to seal the deal has some calling into question his worth as a candidate.

The Washington Wizards are Hillary Clinton: A longtime D.C. establishment, highly flawed, but still dangerous and still very capable of winning this thing.

Gilbert Arenas is Bill Clinton: He’s not actually in the contest at this point, and a lot of people think his team might be better off if he went away completely. But his shadow looms large over those who are competing in his absence. Also has trouble keeping his mouth shot.

DeShawn Stevenson is that time Hillary cried during a campaign stop a couple of months ago: At the time, it was looked like an annoying distraction that might derail the campaign, but he/it might actually be helping the cause after all.

Mike Brown and/or the rest of the Cavs are Jeremiah Wright: They should be helping, but they seem to be the biggest obstacle to their candidate’s chances of winning it all.

Game 5 was the Pennsylvania primary: This thing should be over by now, but last night/week put the result on hold. Barack/LeBron should still win the war, but he lost this battle, and now people have their doubts about whether he can close it out.

Not sure if the Lakers or Spurs are John McCain, but it’s definitely one of them. The Celtics actually don’t fit into this metaphor. Sorry.

Beyond that, just a few more things…

-At one point last night, Reggie Miller said the Wizards were in a “touchy go” situation. And you know what? He was f*ckin’ right.

-Before LeBron, it never even occured to me that 34, 10 and 7 could look mediocre.

-Hey, look what happens when the Wizards shut the f*ck up and play ball?

And that’s all I got. Game notes? Shut up.