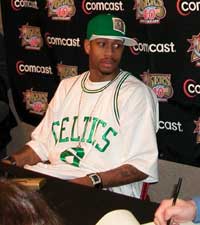 Can you believe that the regular season is only five days away? That’s right, only five days away from the League’s 61st year. Before that jumps off, some of the best hoop writers from around the web would like to say a thing or two about their respective teams, and we’re more than happy to give them the floor.

It’s only right that the most heavily blogged about team gets multiple writers for its preview. Today, Jeff Clark (CelticsBlog) and Dr. Chestnutt (Celtics Doom) help us preview the Boston Celtics.

SLAM: Boston’s front office has been one of the busiest for the last couple of years. Has Ainge and company finally put together a team they’re happy with, or can we expect more tinkering?

JC: You can count on more tinkering. They’ve made no secret about their desire to package a couple of young players to get a veteran All Star to put next to Pierce. They need to be patient and wait for the right opportunity to come up, but sooner or later a big name is going to be on the market and Ainge will get in on the bidding.

DC: Outside of Paul Pierce, this team is a ghastly mixture of several up-and-coming 10th men and white guys with bad knees and/or no clue. Oh yeah, and the mortal remains of Theo Ratliff. Ainge will make a trade, yes, or perhaps several, but you cannot expect to trade for a silk purse when all you’re offering is sow’s ear. This year’s most likely candidates for the title of sow’s ear would be Tony Allen, Sebastian Telfair and Al Jefferson.

Rumors of a possible trade that would have brought Allen Iverson to the Celtics were swirling all summer. Would he have been a good fit for this team?

JC: In the short term, I think he would have made the team an instant contender but not a Championship winner. In my opinion, it would have cost too much in terms of prospects for too short of a payoff. If you get Iverson, you better go all the way and pick up another veteran too. If you are giving up top prospects like Gerald Green and/or Al Jefferson, I want a guy like Jermaine O’Neal or ideally Kevin Garnett.

DC: Iverson would have been a disaster, but it was a case of “either way we’re f*cked.” Ownership clings to the notion that the team can build a winner around Paul Pierce, a talented swingman who in any other market would be embraced as a great second option. Here, he’s the owner’s boy-crush and feted with all the attendant public ass kissing that title confers. He and Iverson would have been the basketball version of Ishtar, only even more expensive. Iverson is Warren Beatty in that joke.

Tommy Heinsohn claimed that Paul Pierce was a better offensive player than Larry Bird last year. But that’s Tommy; he’s insane. Where would you rank Pierce in the Celtics hierarchy?

JC: Tommy is nuts, but in a good way. I’d say that Pierce is as good as any offensive player the Celtics have ever had. Larry Bird was a more complete player, a better defender, more of a team leader, etc. But Tommy was talking about offense, and Pierce just has an incredible knack for getting to the hoop and getting to the line (which all the great scorers have).

DC: Pierce is somewhere between Dirk Minnifeld and Reggie Lewis. If he leads this team past the first round of the playoffs I’ll officially rank him ahead of Ron Mercer.

Sebastian Telfair is one of your point guards. Does this have any chance of working out?

JC: Of course there’s a chance it could work out. He’s got some great point guard skills and he’s now had a couple of years in the league to grow up. If Coach Rivers keeps him running and gives him enough freedom within the offense to make plays, he should be alright. The flipside is that he hasn’t proven anything yet and he’s plagued by off court questions and distractions, so there’s always a chance things could go South in a hurry.

Alright, enough foreplay, how will the Celtics fare this season?

JC: Expect another roller coaster season out of this team. With so many young players, they could be slow out of the gate. With that much talent, they could go on a few runs. A big trade could change things at any time. I’m looking for a slightly better than .500 record and squeaking into the playoffs.

DC: The Celtics will be the worst team in the East. However if they fire Doc Rivers and trade some of their flotsam for a decent big man (ie: Boozer), perhaps they eek out 34 wins.