Celtics Promise to Be More Physical With Heat in Game 2 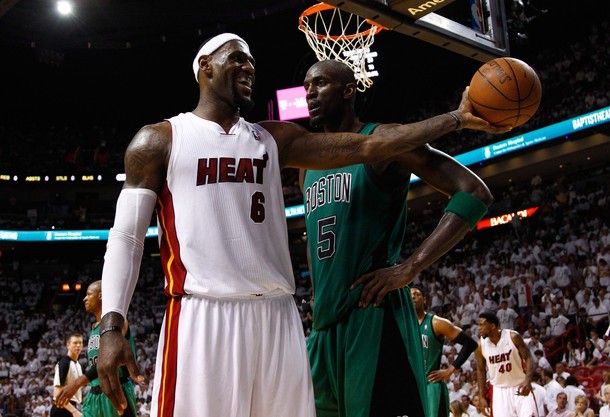 LeBron James, Dwyane Wade and the rest of their supporting cast felt comfortable on the basketball court last night, in leading the Miami Heat to an easy Game 1 victory over their archrivals from Boston.

The Celtics — what with all of their injuries, lack of speed and a loudly ticking clock — know they have to be more physical with the Heat, and to a man, they promised a more rugged outing in Game 2.

Rajon Rondo’s voice never climbed above a whisper after Monday’s series-opening loss. Still, the Celtics point guard made sure his message was conveyed just the same. “Nothing dirty,” Rondo said after this 93-79 loss to the Miami Heat in Game 1 of the Eastern Conference finals, “but they have to hit the deck, too.” […] The Heat made only 5 of 25 attempts from behind the 3-point line, but that didn’t matter because they were able to get to the rim so easily, outscoring the Celtics 42-34 in the paint.

“They made way too many layups,” Rivers said of the Heat in general. “We have to do a better job of protecting the paint. There’s no way any team should get that many layups, that many point-blank shots against our defense.” Put it this way: On a night the Heat swatted away 11 Celtics shots, the reverse happened just once. Did the Heat seem at all threatened by the men in green? “Probably not,” Pierce said. “We didn’t really do too much that way. That’s got to change.” Kevin Garnett, who produced that sole blocked shot, spoke (briefly) about the need to “put up more of a fight” going forward. “We have to slow them to take them out of their comfort zone,” Garnett said. “They’re home. They’re comfortable.”

Game 2 of the Eastern Conference Finals is shaping up to be a chippy, hotly contested affair. And the Heat know it: “That doesn’t change anything for us,” LeBron said. “We expect to hit the deck every single game, me and D-Wade. It’s how we feel teams approach us. They feel like they need to put us on the floor, hard-foul us. It doesn’t change our approach,” he said. “We still have to be in the attack mode, no matter what happens, because that’s when we’re at our best as a team.”

With the Celtics desperately needing to even up the series in Game 2, LeBron James and Dwyane Wade will hit the deck a few times next time out, this much is inevitable. What remains to be seen, is if that will be enough to slow Miami down.