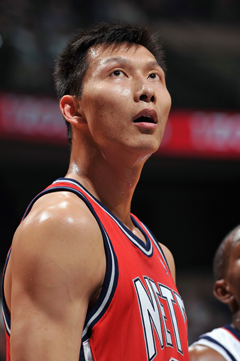 The event at the Chinese Community Center, located at the heart of Manhattan’s Chinatown, was labeled simply as a “basketball clinic,” although the 50 Chinese children waiting at the Center’s basketball court barely stood tall enough to bounce a ball. The Center’s employees passed out signs to the toddlers, one of them reading “Welcome, Yi Jian Lian (sic),” as the pack of Chinese media in attendance trained their cameras at the gym’s entrance. The New Jersey Nets were not so much bringing Yi Jianlian, their prized acquisition, to the Center to host a clinic as they were unveiling him to one of the largest Chinese-American communities in America. After spending a year of reluctantly playing for the Milwaukee Bucks, a city whose Chinese population was a mere fraction of New York City’s, Yi arrived to a major Chinese market, where he could potentially be a major Chinese attraction.

The Nets traded Richard Jefferson–their stalwart wingman who helped bring them to five straight postseason appearances and back-to-back Eastern Conference Championships–to the Bucks in exchange for Yi and forward Bobby Simmons. According to Nets GM Kiki Vanderweghe, the team exhausted the Kidd-Jefferson-Carter trio and needed more youth and cap space. The Bucks were eager to pick up Jefferson, believing they were a playoff team.

“We traded away a good player to get him,” says Vanderweghe during a recent telephone interview. “(Yi’s) a seven-footer who could really shoot. He’s very athletic.

He’s young. Those are all good combinations. On the personal side, he’s an extremely hard worker with a great attitude. He’s a great person. With all that combined he has the opportunity to be a very good player.”

What the Nets also acquired was a three-time champion in the Chinese Basketball Association, a key player in China’s National Basketball team, the December 2007 Rookie of the Month, and most importantly, a global icon with tremendous money-making potential. Forbes Magazine recently named Yi the fourth most powerful celebrity in China (Yao Ming is number one). His first home game for the Bucks against the Chicago Bulls was televised throughout China to an audience of over 100 million. The number of those in China watching Yi’s first game against Yao’s Rockets: 200 million. In short, the man is a global draw.

When asked about his universal appeal, Yi blanched at the idea of him being the Yao of the East Coast. “I don’t care about that,” says Yi. “I just play the game on the court as a professional basketball player. What are you going to do?”

When the Guangdong Southern Tigers, Yi’s CBA team, announced that Yi would enter the 2007 Draft, his agents openly hoped that Yi’s new home would be in a city with a large Chinese presence. Milwaukee, a city with Chinese population of 2,333 in 2007, according to the U.S. Census Bureau, ended up taking him with the sixth overall pick. Yi was not pleased, and would skip the Bucks’ customary post-draft introduction to instead practice with the Chinese National Team in Dallas. “We feel the Bucks are not the best fit for Yi Jianlian,” explained Zhao Gang, Yi’s Chinese agent at the time. Yi would eventually agree to a standard rookie deal with the team and averaged 8.6 points and 5.3 rebounds before a knee injury ended his season prematurely.

Once Yi arrived to New Jersey, Nets officials responded by making their services more user-friendly for Yi’s fan base. The team introduced two new versions of their team website–one in traditional Chinese (which is used primarily by those living in the U.S. and Taiwan) and another in simplified Chinese (which is used throughout mainland China). According to Joe Stetson, Senior Directing of Marketing for the

Nets, the organization is currently looking into providing direct bus shuttles from predominantly Chinese neighborhoods in New York City–such as Chinatown, Flushing and Sunset Park–to Izod Center for home games. Prior to the event at the Chinese Community Center, the Nets brought Yi to an impromptu appearance at the YMCA on Bowery, where over 200 people, most of them young Chinese males, showed up to see the Chairman–a nickname he received after showcasing his offensive skills against a chair during pre-Draft tryouts–in person. “We’re hoping that not only is Yi going to give us an opportunity to spread our audience all over the place, but it will give his audience an opportunity to see more of the Nets than just him,” says Stetson.

At the Chinese Community Center, Jesse Lee showed up toward the tail-end of Yi’s event, armed with Yi’s replica Nets jersey for him to sign. “He’s one of the few Chinese players in the NBA,” says Lee, 17, who plays on the varsity team of Eleanor Roosevelt High School in Manhattan. “It’s hard for Chinese people to make it–it’s hard for anybody to make it in the NBA. For a person like him, being Chinese, you have to (follow) that.” Basketball alone has been an increasing draw in Asian communities, not just in the Tri-State area, but across the country. Tournaments like the North American Chinese Basketball Tournament and the Asian American National Tournament feature nearly 100 teams, with players as young as 15 to as old as 50 participating. “You would think we would play ping pong or something, but you know, Chinese people are coming out to play basketball,” says Lee.

Go to the courts of Chinatown or Flushing and one will see basketball played as often as handball. At the basketball court in the Bland playground in Flushing, We Zhou, a 19-year-old Shanghai native who was about to start a pick-up game, believed Yi’s arrival would increase popularity in the sport. “I personally think he’s better than Yao,” says Zhou, who perhaps had too much confidence in Yi’s ability. “If he can be more aggressive, he can maybe be like Kobe.” While playing with his son at the Seward Park High School outdoor courts, Mui Chang, 52, says he has seen an increasing Chinese presence in NBA attendance and on the courts. “I was here when I was 10-years-old. You would never see Asian kids play basketball. Now of course, look at the way they dress! They look like bums,” says Chang. “My kid dresses like a baller.” Although he did not know who Yi was, he thinks that having another Chinese icon in the NBA wouldn’t hurt attendance. “You look at the Houston Rockets: Before, you would see one Asian there (at the games). Now, they’re all around.”

Despite his and the game’s popularity in the Chinese community, Yi should not take comfort in the fact that Chinese-Americans will root for him solely for heritage’s sake (where art thou, Wang Zhizhi?). Chinese fans are like every other NBA fan: they pride themselves on good basketball. Yi had a promising start in the Nets’ first game, putting up 17 points and 6 rebounds in a win against the Wizards. That was followed by a scoreless effort against the Warriors, where he was 0-4 from the field and sat out most of his team’s near-comeback in the fourth quarter. “He’s got to find his own path,” says Vanderweghe. “There’s very few seven-footers who can shoot as well as he can shoot. It’s up to us to develop him.”

Quan Zhang, a sophomore at Drexel University in Philadelphia who started a Yi group on Facebook (with 635 members), thinks Yi’s arrival to the NBA holds a greater cultural significance. “Yi’s presence is saying that Chinese basketball players are just as competitive and talented as American basketball players.” Zhang says that he would see Yi play in person when the Nets visit the Sixers on Dec. 6. “The deciding factor of my attendance is whether Yi improves this season,” says Zhang. “After all, my loyalty belongs to great basketball more than anything else.”