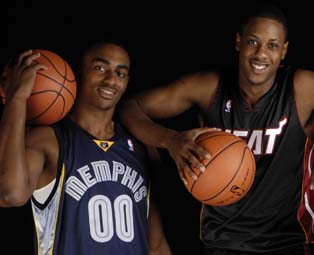 Way to start your careers, guys. From Chris Broussard, ESPN.com:

March Madness heroes Mario Chalmers and Darrell Arthur were thrown out of the NBA’s rookie transition program on Wednesday morning after being caught in their hotel room with marijuana and women, according to several sources.

The players were caught by NBA security at the Doral Arrowwood resort in Rye Brook, N.Y., where 69 of the league’s rookies arrived last night for the four-day seminar in which coaches, referees and former players speak about adapting to the league.

The program prohibits having guests in the hotel rooms.

ESPN originally reported Michael Beasley was also in the room, but has since removed his name from the story. Beasley is not believed to have been involved.

Chalmers and Arthur could be fined $20,000 each. League rules explicitly state a player cannot be suspended for a first marijuana violation. Both players will be required to repeat the program next year.

Arthur was a green room invite while Chalmers was projected to be a first rounder. Not only did they plummet in the Draft, look where they ended up…