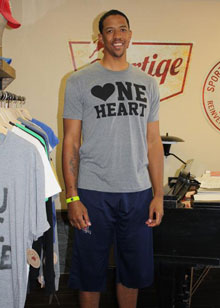 “You only get one heart.”

That’s the idea 29-year-old Suns forward Channing Frye is trying to get across. In a recent phone interview with SLAMonline, Frye spoke to the media for the first time since he learned of a heart condition that has kept him sidelined all season.

Last September, while undergoing a routine physical, Frye learned that he had an enlarged heart. Though Frye wasn’t showing any signs or symptoms of abnormalities, doctors discovered that his heart had been functioning at half speed due to a viral infection. His heart’s ability to persevere through an NBA workload astounded physicians. Frye was in fatal danger, and should have “fallen out” every time he ran sprints, lifted weights, or got his heart rate up.

Frye developed symptoms that led to congenital heart disease during the League’s lockout-shortened season last year. Countless players fell victim to injury due in large part to the condensed schedule and lack of a proper training camp. Frye’s condition was no doubt worsened by that situation, which ultimately put his life at risk.

“Between the months of December and August something happened where I got a viral infection in my heart,” said Frye. “And instead of resting and laying in bed I was playing nine games in 12 days.”

In the NBA, heart issues have been on the rise the last several years. Ronny Turiaf, Jeff Green and Chris Wilcox have all needed to undergo heart surgery. While Frye’s teammate on the Suns, Jermaine O’Neal, has also experienced an irregular heartbeat this season, prompting him to miss several games.

When the news broke of Frye’s condition, his family was concerned about the possibility of his condition being fatal. “My wife freaked out for about two weeks because we didn’t know if I was going to die or not,” said Frye. The Phoenix Suns forward said that he thought selfishly about whether or not he’d ever get the chance to ever play basketball again, something he knows shouldn’t have been his focus.

In this moment of reflection, Frye’s thoughts quickly went from basketball to life. As a husband and father of two, things were put into perspective by one of Frye’s doctors from Minnesota, “He was like, ‘Look—it’s not about you being able to go play—if you were a single guy we would have a different conversation. But it’s about after you get back, being at a level where you can still play with your kids.”

The situation has been a humbling experience for Frye, and has given him the ability to spend more time with his family. He’s also been focusing on the little things in life that can help relieve stress and promote overall health.

To raise awareness for heart disease, Frye and Sportiqe Apparel have teamed up to design a unique t-shirt with the graphic “One Heart” inscribed on the front. A portion of the proceeds from sale of the shirts will be going to The Frye Family Foundation to benefit the cause. Frye is urging athletic programs across the country at every level to test their athletes for heart issues at least once a year.

“I’m excited to continue to raise awareness for a cause that is so close to home,” said Frye. “I feel it is important to bring attention to this issue and hopefully prevent this disease from claiming more young lives.”

Since being away from basketball, Frye has started to try new things to keep his mind, body and soul right. One of the few exercises that Frye is still allowed to practice is yoga. He revealed that working with a yoga instructor throughout his recovery has really taught him how to breathe properly, citing the differences between mouth-breathers and nose-breathers.

“If you look at guys like Jordan or Kobe when things get rough, they never breathe out of their mouth,” said Frye. “They always have their mouths shut. They’re breathing through their nose. They’re calm.”

When asked about returning to the NBA next season, Frye said that he’s “96 percent” sure he’ll be back in uniform. At this point, Frye said that he’s just starting to get back in the swing of things with interviews, traveling and being more active. Another round of medical tests will come in March that determine whether Frye can continue down the road to recovery, and eventually rejoin his teammates on the court.

“Every day I’m getting closer. I just got to make sure that I stay on top of it, make sure I rest, make sure I’m eating right, and just doing the right thing,” said Frye.

Until Frye returns to the court, he’s on a mission to make sure that people are aware of the dangers of heart disease, and do what they can to be tested. “I think a lot of people kind of put heart issues to the side. It’s not like a hamstring. It’s not an arm or a leg. It’s what keeps us moving.”