The analyst analyzes analytics, and much more. 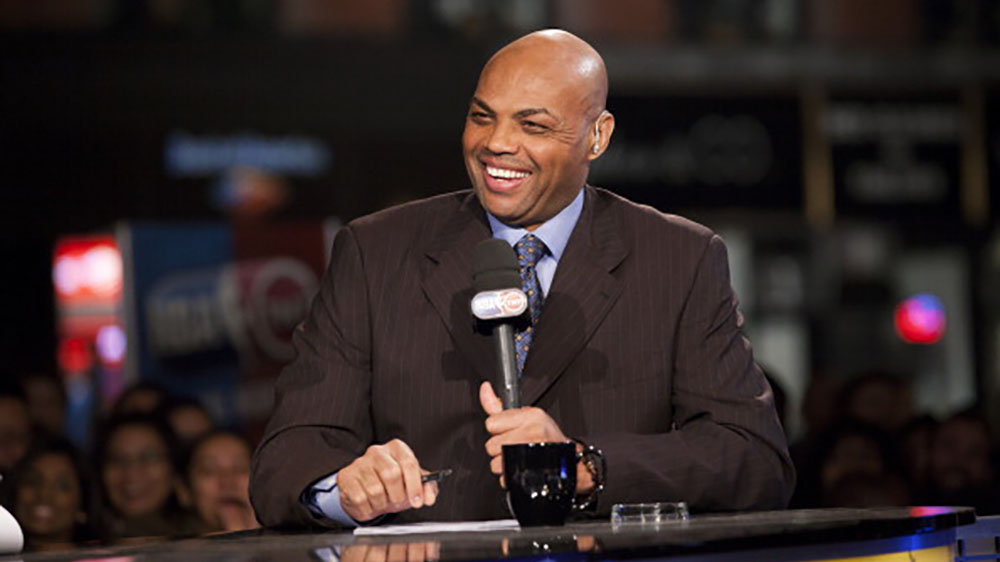 Up the stairs we go, and through some doors and down some hallways and then up some more stairs and through some more hallways. Finally, we arrive. Charles Barkley and Kenny Smith are sitting on some couches in a room buried somewhere deep backstage. There’s tables with hot food and cold drinks, bowls of chips and platters with cookies and fruit. The first half of Thursday night’s Bulls-Cavs game is showing on a flatscreen in the front of the room.

TNT’s Inside the NBA crew has made the trip to New York City for All-Star weekend, and on this night they’re broadcasting live from Hammerstein Ballroom on 34th street. SLAM, along with a couple of other outlets, was invited backstage. Ernie and Shaq are hanging in a different room. In here it’s just Kenny, Chuck and a few other TNT employees. “This is the best job other than playing,” Kenny says.

Two nights ago, on Tuesday, Barkley made news by calling Rockets GM Daryl Morey an “idiot” and saying “analytics are crap.” The rant went viral, and became TV, radio and Internet fodder.

“He has maybe an extreme point, but there’s a lot of validity to what he said,” Smith says when asked if he’s given Barkley’s tirade any further thought. “I think that stuff has a place after you put your system in. Then using analytics makes sense. Information is good, but it’s also how you use it. You have to be able to evaluate talent, and make talent improve. If you don’t have that on your staff, any analysis you do won’t matter.”

Has Barkley, with two days to think about what he said, changed his stance at all? SLAM asked him that and more.

SLAM: You sick of hearing about analytics yet?

Charles Barkley: No, not at all, I just think they’re so sensitive. Just because I don’t like analytics doesn’t mean they have to get all bent out of shape.

SLAM: What does that word mean to you?

CB: It’s a term for stats. But everybody knows about stats. But the key to me is, I look at basketball players. I’ve been in the NBA for over 30 years—one thing I’m sure of is the team with the best players has a really good chance of winning games and championships.

SLAM: What about when you’re dealing with, let’s say, two good teams late in the Playoffs, or the Finals, where the talent is equal. That’s where the analytics can come in and help. For example, some sort of coaching change could be made based on stats, analytics and info, no?

CB: Sometimes it’s all gut. Gregg Popovich changed up his starting lineup when the Spurs won a couple of championships. You know, he moved Ginobili to the bench. That’s not analytics—that’s just trying to get the best matchups. I’m not saying that stats aren’t important, but it shouldn’t be that we build our team around that stuff.

SLAM: Do you feel like you got caught up in things on Tuesday? Though Morey did come after you first on Twitter…

Hold on one second.

[Barkley answers his cell phone and tells the person on the other end, apparently making a Chipotle run, that he wants “some brown rice, pinto beans and a bunch of chicken in a bowl.” ]

SLAM: All good. We were talking about how analytics, that extra stuff, won’t trump talent but can be the difference when two teams with similar talent levels meet.

Kenny Smith: I have to add something too, because you asked me the same question. I’ll really believe in analytics if you trade Danny Green for Chris Bosh and win a championship. When you show me that a guy that’s not obviously better than another guy makes a team better than the other guy would have. When someone says, You know, Bosh is not going to help us win but Danny Green will and we know that because of analytics. When that happens then I’ll be like, This stuff works.

SLAM: There was an article the other day about your guy [and college coach], Dean Smith, and how he was into this stuff. He apparently was a fan of points-per-possession.

KS: You know why he did that?  That was for playing time, to see who deserved it. So if you were on the court, he’d keep track of how the team was doing. It had nothing to do why he was going to do what he did. Also, we had 11 McDonalds All-Americans.

SLAM: Charles, you said a bunch of coaches have reached out to you after your anti-analytics rant. Any chance you can say who?

CB: No. There’s one unnamed NBA coach who said in the papers that he agreed with me, Mark Cuban agreed with me, and I had five NBA coaches say, Thank you for saying that. They’re guys who have no power and are getting their careers ruined by analytics. That’s what a lot of coaches feel like. Guys who never played the game are drafting and trading players based on analytics, and the coaches don’t have enough power.

SLAM: Enough with analytics. James Dolan, what you think about that whole thing?

CB: I thought it was much ado about nothing. Ya’ll giving these fans the ability to say whatever they want to say, I have no problem with anyone blasting these losers on the Internet. Listen, man, people can’t just say whatever they want about you. If someone wrote you an e-mail and said, You suck at your job, you don’t have to take it. It’s just much ado about nothing. Now with the Internet we’re giving every loser the ability to voice their opinions and it’s just unfortunate. We giving too much power to the fans, man, and the media also.

CB: Yeah, we need legalized gambling in sports. People gonna gamble on sports no matter what. People always going to bet on sports, that’s one of the reasons the NFL is so popular, and that people like sports—because they gamble on them. Might as well turn it into something that can make jobs for people.

SLAM: In terms of basketball, we’re watching the Cavs now—they look like a different team since the trades, especially with Mozgov.

CB: Well he’s a good player, No. 1. But also he’s just big. The Cavaliers were too small before. Getting a legitimate center made them a different team.

SLAM: So you think plugging in any big guy would have worked, or Mozgov specifically is making the difference?

CB: A little bit of both. Mozgov is a good player, but they just had to get better. When you see a big guy down there you hesitate. They couldn’t protect the rim, they had two small forwards down there. Now they can. That’s a big difference. Trust me, as a player, you know when you’re going to the basket, you’re looking for a big guy, and the Cavs didn’t have a big guy. This is also a perfect fit for him.

SLAM: You expect Cleveland to come out of the East?

CB: I don’t know, man. Chicago’s still there. They got a better record, and they haven’t been healthy all year. But I don’t have any idea. Washington’s good, Atlanta’s solid. I don’t want to be one of those guys who pretends he knows everything that’s going to happen.

SLAM: When you’re sitting here, how are you watching the games? What are the things you’re looking at or for?

CB: That’s a good question. I’m watching the style of play, looking at matchups, you guys talk a lot about analytical bullshit—this game’s all about matchups. Here I’m looking at the Cleveland Cavaliers shooting way too many jump shots, and they’re playing at too slow a pace. And that’s why I think Chicago can beat them in a seven-game series.

Look at that, they’re just jacking up jumpers, man.

SLAM: Separate question—you’re in the news a lot, and it feels like people know a lot about you, but what’s something about you people don’t know?

CB: Man, I don’t tell people that much about me. I think most people know that I’m a clean fanatic. Other than that I just want to do my job and be honest and fair, some people are going to like it, some people are not.

SLAM: Hobbies or anything?

CB: Oh, man, I just watch a lot of movies, movies and sports.

SLAM: What are some recent ones you’ve seen that you liked?

CB: Um, I enjoyed Selma, that was a really emotional movie. I liked The Judge. I’m trying to get Kenny to come see Fifty Shades of Grey with me.

KS: I’ll go to Fifty Shades of Grey if you come see a Broadway play with me. A matinée.

I’m trying to get him to go with me.

CB: You gonna buy me popcorn?

CB: I dunno, man. Broadway’s just not my thing.