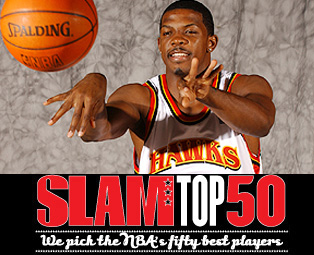 There’s not much happening in the NBA today, aside from my man Joe Johnson being named to the All-Star team. So I thought it would be a good day to catch up on a few things…

• Been meaning to mention this for a while but there really hasn’t been an appropriate time:

We just sold SLAMonline.com to ESPN.com. That’s right, from now on Sam and I will be posting regularly at ESPN.com.

Actually, what I’ve been meaning to mention is that we’ve made some changes around these parts. When Ben Osborne took over as editor in chief, we also reconfigured some other stuff. I was hired by SLAM in the summer of 2000, and for the last seven years I’ve been the online editor. We’ve gone from having zero content on the site to a few articles from the mag each month to what you see before you today, with about ten original stories posted every day.

But the grind has been getting to me for a while now. For the last seven years, I’ve written about the NBA right here almost every day. And it got old, to be honest.

So when Ben came in and asked me to shift what I was doing and help him out, I was ready for a new challenge.

So, I’m now the executive editor of SLAM magazine. Your man Sam Rubenstein? He’s the new online editor.
Wait, what does this mean? Well, as executive editor, I read everything that runs in the mag before it goes to our art department to be laid out. I edit the stories, try to come up with funny headlines, select pullquotes, make the stories tighter, help come up with coverlines, come up with story ideas, help set up interviews and photo shoots, etcetera, etcetera. Basically, I’m trying to help make the magazine fun.

But I’m still writing here. I’m still Linkstigating. The Links aren’t going nowhere. And I’m still consulting on SLAMonline. It’s just that now when someone wants to run an ad campaign or write something for SLAMonline or whatever, Sam’s in charge.

Just so ya know.

• I watched the entire second half of that Knicks/Lakers game last night. Kobe wasn’t a force in the fourth and the Knicks managed to hang on to win it, following a Jamal Crawford/Eddy Curry alley-oop that was reminiscent of Kobe-to-Shaq vs. Portland. Not really a surprise, really, considering how up-and-down the Lakers have been all season.

Best part of the night was the MSG broadcast, which went buckwild down the stretch in the fourth. The feed cut out a few times as the teams went back and forth, and there was one portion of the telecast where only one camera was working — from the corner of the arena.

Highlight of the game for me was when they were panning through the stands looking for celebrities, and the camera focused in on Hawks guard Joe Johnson, sitting up in the stands. The Hawks were in L.A. with a night off. Some teams and players would probably hit the clubs. Joe Johnson went to watch a basketball game. That’s why he’s an All-Star.

• Meanwhile, in Portland, the Blazers are furious that Zach Randolph didn’t make the Western Conference team. Sure, his numbers are great. But look at this quote from Jarrett Jack…

“See. That’s ridiculous. Come on. This guy is a 25-and-10 guy, or whatever Zach is. Okay, I can see you take the record in consideration, but then you can’t put Ray Allen on there. And Ray has been hurt. He missed some games. I just feel bad for Zach. He has played hard all season, played against double and triple teams – Okur doesn’t face that, but Zach does night in and night out, and he’s still producing. He’s scoring, he’s rebounding, and he hasn’t been a distraction to this team this year.”

Thing is, Okur does face double teams, he just doesn’t shoot over them.

Also, I bolded that last part for a reason. You know, a reason.

• ESPN has an excerpt from John Amaechi’s book posted here. To summarize:
It begins with Amaechi talking about how the Jazz system didn’t work for him but the Jazz wouldn’t change it because they had Karl Malone. (Duh.)

Amaechi talks about Jerry Sloan getting mad at him because he got called for a three-second violation. Amaechi took this personally.

He hung out at a place called “Cahoots” in Utah. (Sidebar: If you’re hanging out at Cahoots and someone calls your cell phone, do you say, “I can’t talk right now, I’m in Cahoots”?)

Amaechi sat around his apartment and listened to The Carpenters.

There’s a lot of talk of someone named “Ryan.” Hmm.

Amaechi cried when Andrei Kirilenko invited him and “a partner” to his Christmas party. He couldn’t attend, but he sent over a bottle of “Jean Paul Gaultier-dressed” champagne. Whatever that is.

How great is that? There’s a reason the Clippers are the Clippers, after all. They had a great season last year, then everyone got paid this summer and decided to coast this year, and now the coaches are starting Maggette just so the owner will see how he’s supposedly not playing hard.

Some things never change, I guess.