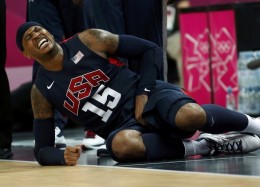 Argentina’s Facundo Campazzo admitted that he purposely hit Carmelo Anthony below the belt on a three-point attempt last night.

According to Campazzo, the cheap shot was in retaliation to one he allegedly received from Chris Paul earlier in the game.

In the end, that incident helped motivate Team USA, as it romped past Argentina 126-97 — led by Kevin Durant’s 28 points, including 17 in the decisive third quarter — for its fifth consecutive victory in the Olympic Games.

The AP has more:

With their fourth blowout in five games, the Americans (5-0) moved into the quarterfinals, where they’ll meet Australia (3-2) on Wednesday night and proclaimed that if anyone is to beat them in the days ahead they’re going to have to outshoot these run-and-gunslingers from the U.S.

LeBron James added 18 points and Paul 17 for the Americans, who were fueled by Argentina’s Facundo Campazzo hitting Carmelo Anthony in the groin as he hit a 3-pointer to end the third. With Anthony buckled over on the floor, players on both benches pointed fingers and jawed at each other. Campazzo acknowledged hitting Anthony on purpose, and said he did it because Paul had punched him earlier. Following the game, Kobe Bryant confronted Campazzo. “It was inappropriate,” Bryant said. “I said, ‘you don’t do that’ and he said, ‘I know.’ He knows he’s wrong. That was uncalled for and I let him know. To his credit, he acknowledged it. He said, ‘My fault, I know.’ And that was it.” Maybe not. Argentina and the U.S. could meet again in the semifinals. The two hooked up in the 2004 Athens Games with Argentina winning before the Americans atoned four years in Beijing. “We find a way to play them every single year,” Paul said. “It’s a rivalry.” Bryant said the 29-point was the U.S. team’s way of reminding the Argentineans they’ll have to play much better – or settle for silver or bronze. “You kind of want to send a message a little bit,” said Bryant, who scored just 11 points. “This was the second game in a row that a team has played us close. We didn’t want to give them confidence.”

Following the game, Carmelo Anthony had this to say regarding the skirmish (via the NY Daily News): “Carmelo joked that he ‘just fell down’ but later told me ‘it was a cheap shot but we move on.’”

Opposing squads have tried just about every tactic against Team USA so far, but to no avail. Going forward, the Americans can expect plenty more of chippiness and the occasional dirty play. They must stay cool and answer with their formidable firepower.