Checking in from the China Games 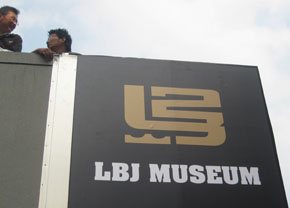 I flew two hours from Beijing to Shanghai yesterday to attend the first of three NBA China Games between the Magic and Cavs. Exhibition games are always a weird deal for me, a mix of excitement at being back at an NBA game and then boredom and disappointment and at what are inevitably anti-climactic events.

I thought it would be different in China and it was at first. My opportunities to see NBA games are severely curtailed these days – reduced to whatever in town when I am, around the holidays – so every opportunity is a golden one. And I have been anticipating this game for many, many months.

I caught an NBA bus to the distant arena at a downtown hotel and standing in the lobby, I bumped into Mike Brown and Danny Ferry, Rick Barry, Donyell Marshall, George Gervin and Darryl Dawkins. Double D was the most thrilling to me, only one I was moved to take a picture with.

I attended a VIP pregame reception, which was not really open to the press. I was there as a guest of a friend who does a lot of merchandising work with the NBA. I was munching on eggrolls and spinach puffs and sipping flat Budwesier when who should I see walking towards me but David Stern and Timothy Chen, the newly named CEO of NBA China.

They were introduced to my friend and then to me. Stern eyed me a bit warily. “And are you here on business or pleasure tonight?” he asked, fairly cheerfully.

We proceeded to talk for a while about a story I am working on about the NBA’s future plans in China. Contrary to our frequent jokes, there was nothing robotic about the commish. We had a spirited conversation about the future of the NBA In China, which remains a bit murky but certainly seems to have a grand vision. The appointment of Chen as the head of the company is significant; he is a seriously connected, very well regarded guy who has run Motorola and Microsoft in China.

For the first time, the NBA and the Chinese Basketball Association are publicly admitting what has long been known –that they are talking about collaborating. Specific details of the NBA’s plans here will presumably start being announced in the coming year and become much clearer next fall, following the Olympics.

Before entering the arena, I stepped into a press conference and saw Stern seated on a dais between the head of the CBA and an official from the Shanghai Sports ministry, a grin plastered on his face. After each made an opening statement filled with platitudes, they opened the floor to questions. A Chinese reporter in front of me said, “Mr. Stern. You look very tired… so tired that I saw you almost fall out of your seat earlier today. I wonder if the talks with the CBA are making you very exhausted?”

Stern continued to grin, while assuring everyone that he was fine and the CBA was not making him fall down. He said something to the effect of, “We arrived last night and have been talking, talking, talking ever since. We have very big ideas for China and they require a lot of planning.”

Later, Mr. Li, the head of the CBA, made a joke about Stern’s exhaustion but overall he didn’t seem too jovial, admitting to feeling a lot of pressure about the NBA’s looming entrance into China and –more importantly – the performance of the men’s and women’s team at the Beijing games next August. [Li oversees the national teams as well as the league].

When I finally made it into the arena, I was shocked to find it almost half empty, just about 10 minutes before tipoff. After all the talk of the NBA’s bright future in China and people’s love for the game here –which I see firsthand all the time – I expected a packed and raucous house. Shen, my man from Chinese Slam laughed at my observation. “You don’t know Shanghai,” he said. “Maybe it would be different if it weren’t so far away, or the tickets were cheaper, or there were bigger stars here…”

It’s true that the arena, a beautiful, NBA caliber joint, is deep in the boonies –over an hour from downtown Shanghai — and the tickets were ridiculously expensive, ranging from 1000 to a whopping 5000 rmb ($133-$666). But bigger stars? Nike set up a well-attended Lebron James museum for the week in Shanghai for God’s sake. Giant billboards of him are all over Shanghai and Beijing. Dwight Howard is also revered, having visited many times for both the League and adidas and garnered fans for his play as well as his friendly, outgoing personality.

Still, Shen wasn’t overly impressed. “Maybe if it were Kobe or Nash, there would be more excitement,” he said.

By tipoff, most of the seats were actually full, but the volume and excitement level remain surprisingly low all night. Every time Dwight or especially Lebron touched the ball, you could hear a rush of excitement, but in between it was eerily silent. I was sitting on the baseline, close to the Magic bench and I could hear them chatting clear as day. I even asked Rashard Lewis, whose diamond earring almost blinded me with their glare, why he wasn’t playing; he pointed at his ankle. All of this was done at a regular conversational level. I enjoyed listening to Bo Outlaw’s running commentary and advice to everyone, from Dwight to the refs, all in a rumbling basso profundo. I was pleased he never checked in. Bo definitely has a future in broadcasting.

It was also nice to see Stan Van Gundy back on the bench – I always enjoyed watching him coach the Heat – and a little strange to see Patrick Ewing. He’s one of those guys I can ever quite get used to seeing in a suit.

At first it seemed insane to me that the teams brought their mascots with them, along with the Magic cheerleaders and the Cavs’ pump-up-the crowd breakdance-and T-shirt-toss guys. Then I saw how the crowd responded to them. As basketball purists, we sometimes overlook the added value of such things. But when you talk to Chinese fans, they often point to production values and entertainment add-ons as the type of things they would like Chinese basketball to adapt from the NBA.

On the court, it was often harder to maintain enthusiasm, with Lebron having a sluggish game that certainly contributed to the puzzling lack of energy in the arena. In between bouts of action the crowd repeatedly lapsed into silence, just waiting for a reason to explode. When Lebron busted loose for back-to-back breakaways, one ending in a power slam, the next in a sweet and-one layup, the crowd had exploded. Unfortunately, that was the beginning and end of Mr. James’ standout play for the night.

Fortunately, Dwight Howard was beasting from whistle to whistle, still on the floor throughout the fourth quarter and finishing with 31 points, 14 rebounds and several monster jams and amazing, distant one-handed rebounds. Jameer Nelson also was strong throughout.

The overall dullness of the game was anticlimactic after waiting so long for it. I really didn’t think it would be possible to have a boring NBA game in China, but I was wrong. N the end, no matter where you are, an exhibition game is an exhibition game. And I’ll fly to Shanghai for one again in heartbeat if they return next year.