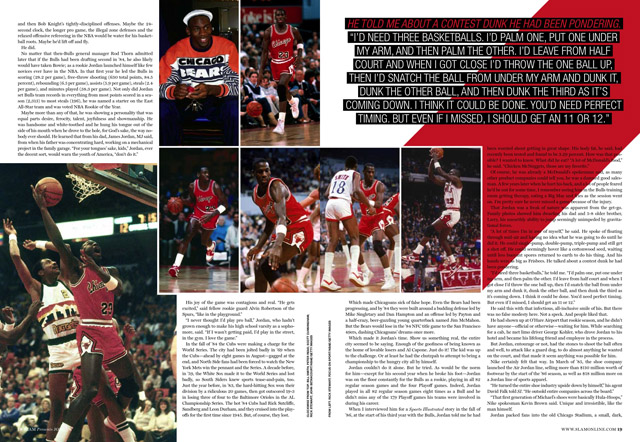 Happy birthday, $. In celebration of MJ’s 48th birthday, we’re running the story below, penned by Rick Telander and originally featured in SLAM Presents JORDAN. The piece chronicles Chicago’s role in the rise of the GOAT, from the ’84 Draft right through his first few seasons in the L. Also, don’t miss our gallery of MJ’s best SLAM covers through the years. –Ed.

Chicago was ready for Michael Jordan.

It was the fall of 1984, and citizens of the Windy City, like sports fans throughout the country, had seen the young man soar for the University of North Carolina, be named College Player of the Year in both his sophomore and junior seasons (he entered the NBA Draft before his senior year), win the ’82 NCAA championship by making the game-winning shot against Patrick Ewing’s Georgetown squad, lead all scorers on the U.S. Pan American title team, and win a gold medal as co-captain of the ’84 U.S. Olympic team in Los Angeles in August.

But the city was ready for more than just a really good basketball player. Chicago was restless and yearning for the big time—stuck as it was between the light-seeking towns of New York and Los Angeles—and it was prepared to welcome a hardwood demigod, a charismatic, insanely talented sports superstar who could lead the city through the darkness of Lake Michigan winters while equaling, or even surpassing, the current greatness of the Bears’ Walter Payton, the Cubs’ Ryne Sandberg, the White Sox’ Carlton Fisk and the Blackhawks’ Denis Savard.

Everybody knew the Rockets took University of Houston center Akeem Olajuwon with the first pick in the ’84 Draft. This was understandable, at least, since Olajuwon was tall and athletic and had a huge hoops learning upside, since he was a former soccer player from Nigeria. But Kentucky’s Sam Bowie second to the Trail Blazers? That seemed nuts. That was nuts. It left Jordan for the Bulls as the third pick. And there was a chance that this slender, 6-6 guard-forward might be better than advertised. Maybe this kid from Wilmington, NC, had actually been held back by the constraints of Dean Smith’s and then Bob Knight’s tightly-disciplined offenses. Maybe the 24-second clock, the longer pro game, the illegal zone defenses and the relaxed offensive refereeing in the NBA would be water for his basketball roots. Maybe he’d lift off and fly.

No matter that then-Bulls general manager Rod Thorn admitted later that if the Bulls had been drafting second in ’84, he also likely would have taken Bowie; as a rookie Jordan launched himself like few novices ever have in the NBA. In that first year he led the Bulls in scoring (28.2 per game), free-throw shooting (630 total points, 84.5 percent), rebounding (6.5 per game), assists (5.9 per game), steals (2.4 per game), and minutes played (38.3 per game). Not only did Jordan set Bulls team records in everything from most points scored in a season (2,313) to most steals (196), he was named a starter on the East All-Star team and was voted NBA Rookie of the Year.

Maybe more than any of that, he was showing a personality that was equal parts desire, ferocity, talent, joyfulness and showmanship. He was handsome and white-toothed and he hung his tongue out of the side of his mouth when he drove to the hole, for God’s sake, the way nobody ever should. He learned that from his dad, James Jordan, MJ said, from when his father was concentrating hard, working on a mechanical project in the family garage. “For your tongues’ sake, kids,” Jordan, ever the decent sort, would warn the youth of America, “don’t do it.”

His joy of the game was contagious and real. “He gets excited,” said fellow rookie guard Alvin Robertson of the Spurs, “like in the playground.”

“I never thought I’d play pro ball,” Jordan, who hadn’t grown enough to make his high school varsity as a sophomore, said. “If I wasn’t getting paid, I’d play in the street, in the gym. I love the game.”

In the fall of ’84 the Cubs were making a charge for the World Series. The city had been jolted badly in ’69 when the Cubs—ahead by eight games in August—gagged at the end, and North Side fans had been forced to watch the New York Mets win the pennant and the Series. A decade before, in ’59, the White Sox made it to the World Series and lost badly, so South Siders knew sports tease-and-pain, too. Just the year before, in ’83, the hard-hitting Sox won their division by a ridiculous 20 games, then got outscored 19-3 in losing three of four to the Baltimore Orioles in the AL Championship Series. The hot ’84 Cubs had Rick Sutcliffe, Sandberg and Leon Durham, and they cruised into the playoffs for the first time since 1945. But, of course, they lost.

Which made Chicagoans sick of false hope. Even the Bears had been progressing, and by ’84 they were built around a budding defense led by Mike Singletary and Dan Hampton and an offense led by Payton and a half-crazy, beer-guzzling young quarterback named Jim McMahon. But the Bears would lose in the ’84 NFC title game to the San Francisco 49ers, dashing Chicagoans’ dreams once more.

Which made it Jordan’s time. Show us something real, the entire city seemed to be saying. Enough of the goofiness of being known as the home of lovable losers and Al Capone. Just do it! The kid was up to the challenge. Or at least he had the chutzpah to attempt to bring a championship to the hungry city all by himself.

Jordan couldn’t do it alone. But he tried. As would be the norm for him—except for his second year when he broke his foot—Jordan was on the floor constantly for the Bulls as a rookie, playing in all 82 regular season games and the four Playoff games. Indeed, Jordan played in all 82 regular season games eight times as a Bull and he didn’t miss any of the 179 Playoff games his teams were involved in during his career.

When I interviewed him for a Sports Illustrated story in the fall of ’86, at the start of his third year with the Bulls, Jordan told me he had been worried about getting in great shape. His body fat, he said, had recently been tested and found to be 3.29 percent. How was that possible? I wanted to know. What did he eat? “A lot of McDonald’s food,” he said. “Chicken McNuggets, those are my favorite.”

Of course, he was already a McDonald’s spokesman and, as many other product companies could tell you, he was a damned good salesman. A few years later when he hurt his back, and a lot of people feared he’d be out for some time, I remember seeing him in the Bulls training room getting therapy, eating a Big Mac and fries as the session went on. I’m pretty sure he never missed a game because of the injury.