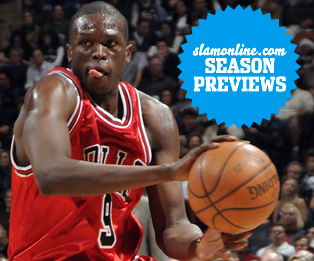 What’s up, Pax? Can I call you Pax? It’s just that my strongest memories of you come from the days when you were wearing No. 5 and knocking down three-pointers and winning championships, and

the thought of calling you “Mr. Paxson” or something just makes me feel old. Er. So I’m gonna go with Pax, if you don’t mind.

So, Pax. What’s the deal? You took over as the Bulls’s Executive VP of Basketball Operations back in April of 2003—bet you’ve got a nice office—and have accomplished…what, exactly? Things started out well enough. You targeted and hired Scott Skiles, the perfect coach for a young team. Came up unlucky seven in the best draft of the new millennium, and still came away with a player. You signed away the heart and soul of your most bitter division rival. And then there was the 2006-07 season. That was fun, winning 49 games and bouncing the Heat—excuse me, sweeping the defending champion Heat—in the first round. And fleecing Isiah Thomas for two high first-round picks in exchange for Eddy Curry, that was great—although, let’s face it, Isiah never really did come out on top when it came to trades. Things were looking up.

Then last year your Bulls won 33 games. Thirty-three! You went from 49 wins and the first playoff series win since the days of Scottie and MJ right back to the lottery (in a year where most of the East, for lack of a better word, sucked). Your huge free-agent signing blew up in your face. Your hand-picked coach predictably wore out his welcome. And the Bulls are no closer to having a go-to guy or low-post scoring threat than they were when you took the job.

Why are they keeping you around again?

Since 2003, you’ve managed to acquire six top-10 draft picks, including this year’s number one. So far, none of them have proven capable of carrying a team. You’ve had some bad luck, sure—it would have been nice to inherit a team featuring Yao Ming instead of a hobbled Jay Williams, huh? But what do you have to show for those picks? Three guards under 6-5 (Kirk Hinrich, Ben Gordon and Derrick Rose), two hyper-active and athletic but skill-challenged young bigs (Tyrus Thomas and Joakim Noah) and Luol Deng. Not bad, but no All-Stars as of yet either.

The signature move of your regime, of course, was signing four-time Defensive Player of the Year Ben Wallace to a $60-something million contract. Seemed like a good idea at the time—he would provide veteran leadership and guidance (along with rebounding and defense) and help pull the Baby Bulls into the present. You were strengthening a strength, but hell, defense wins championships, right? Even I bought into it.

Only thing is, did you talk to the guy first? First there was headbandgate (no one foresaw that?), then his declining the captaincy, and the whole “I want to be more involved in the offense” part when he couldn’t shoot a lick, and the fact that he only had one 20-plus rebound game that first season. Oh yeah, and the guy he replaced, Tyson Chandler? You more or less gave him to New Orleans, where he became half of the most exciting big-little combo in the League. And he turns 26 next week. Good job, thanks.

(Think about this. Obviously hindsight is 20/10, But you could have kept Chandler and not signed Wallace, and drafted Brandon Roy instead of Aldridge—or simply kept Aldridge. Bet you would have won more than 33 games last year.)

But enough about the past, let’s talk about the future, and what you accomplished this off-season.

• You won the lottery. Good deal. Congratulations. Time will tell whether you made the right choice—although who knows whether you’ll even be in a position to care at that point. For the record, I would have taken Derrick Rose too, so no worries there. Just don’t be second-guessing things if Michael Beasley comes out of the gate strong and Rose has some growing pains. At least Derrick made it safely through rookie orientation.

• You hired Vinnie Del Negro to be the next coach. I don’t know about that one. Yes, he was a part of the Spurs organization, and that’s always a plus. But he’s never coached on any level before, and it’s hard to say what his philosophy will be. Does he even have one? I hope so, because there’s plenty of other things he doesn’t have, like a track record or a current hairstyle. Which leads to the other part of the equation. Maybe Mike D’Antoni really did have his heart set on New York, and maybe Jerry Reinsdorf wasn’t willing to go any higher salary-wise, but there’s a whole lot of us who wish you could have convinced Mike D to hold off on making a decision until after the lottery at least. The chance to coach Derrick Rose may have swayed his decision, huh? I guess we’ll never know.

• You re-signed Luol Deng. That was the right move. Sure, now you’ve got a lot of money tied up in him and Larry Hughes and Kirk Hinrich and Andres Nocioni and Drew Gooden, and you still might not have an All-Star on your roster, but keeping Luol was the right thing to do. Of course if he doesn’t assume a leadership role and someone doesn’t emerge as the lead dog and you miss the playoffs you’ll probably get fired, but hey, your contract is guaranteed too, right?

Good things all. But what about what you didn’t do?

• Ben Gordon is still unsigned. Seriously? In late September? Look, I don’t have a problem with your letting Ben walk if that’s what you want to do. I’m not one of those people who thinks you can’t let someone go for nothing. Because trading for the sake of not losing someone turns you into the Knicks. But you have to do something. Ben was a top-five pick and your leading scorer last season. Is he a guy you build a team around? Probably not. And with Hinrich, Rose, Hughes, Sefolosha and Gordon, there aren’t enough minutes to go around. (The qualifying offer doesn’t qualify as a decision, by the way. Then you have a grumpy, underpaid player who’s got one foot out the door and one eye on his next contract. Terrific.) So make a decision. Please.

• You still don’t have a low-post scorer or go-to guy. Unbelievable. I won’t re-hash the list of All-Stars who’ve been traded in the past couple years, but I find it hard to believe that you couldn’t get one of them. Chicago is still a prime NBA destination, is it not? You’re still selling out games, right? It would be nice to have a main attraction—or at least a guy who could create off the dribble when the drive-and-kick offense isn’t working. Like it didn’t, um, all last season. Have you looked at those shooting percentages? Yuck.

I won’t bore you with numbers, since I’d hope you know them all by heart. But two years ago you probably overachieved, and last year you probably underachieved. It’s fairly safe to assume that you won’t shoot as badly as you did last season, and you won’t shoot as well as you did the previous season. And with a rookie point guard and a drastically younger roster (your oldest player is Larry freaking Hughes), the playoffs might not happen. Thirty-seven wins may have gotten the Hawks into the post-season last year, but it’s gonna take at least a .500 record to get there this year. If the shots fall and Rose matures quickly and Deng comes in strong after leading the UK this past summer and Vinny has a plan and you can get some solid production from the Gooden/Noah/Thomas frontcourt, sure, a return to ’06-07 standards and a playoff berth isn’t out of the question.

But I know better.

Last year I picked your Bulls to win 50-plus games, maybe reach the Eastern Conference Finals. I’ve been wrong before, but that was bad even for me. Which is why I refuse to be overly optimistic this year. Barring any major changes or trades, I think you’re looking at 42-42. Dead even, with an outside shot at the playoffs. And I’m OK with that.

But what I want from you is this—a plan. Tell me something. Anything. Are you going to try and drop salary to go after Dwyane Wade or LeBron James in the summer of ’10? (Good luck with all that.) Or are you content to keep building through the draft, hoping some combination of youngsters will eventually be able to put it all together? What are you trying to do, and by when? Just figure that out, and soon, or else I think we’re gonna be asking somebody else real soon.