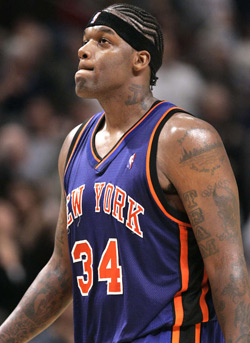 -What’s with NBA players getting robbed in Chicago? A little over two weeks ago, it was Antoine Walker who got stuck up inside his own home, and now Eddy Curry (and his family) has been a victim of home robbery:

Three masked robbers broke into the suburban Chicago home of Knicks forward Eddy Curry early Saturday, according to the police. The deputy chief of police, John Madden, said the robbers restrained Curry, his wife and an employee with duct tape, then made off with cash and jewelry.

Madden said that investigators did not believe the robbery was a random incident.

(Note to self: Don’t live in Chicago next time I become an NBA player.)

-Rumor has it that the League is about to reinstate Joey Crawford.

-Naturally, Parker took a shot at Kobe Bryant as he left L.A.

“D-Wade is more of a people person than Kobe,” Parker said of Bryant, his often-mercurial teammate. “I’m looking forward to jelling with Wade, and playing with him. He’s going to be a great teammate.”

(What, you think Wade will invite you out for drinks more often than Bryant did? Not if you continue to suck at your job, my friend.)