China Culture Night in the Swamp 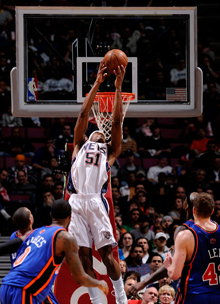 I’ve been back from Beijing for about two months now and have been missing it quite a bit lately. So when I received a press release headlined “Nets to Host An Evening of Chinese Culture on Sunday, March 8 During Nets-Knicks Game at Izod Center” I figured I had to be there. It was an opportunity to bring a few of my different worlds together. It did so in some unexpected ways.

One bizarre, somewhat troubling thing you see all the time in China are boondoggle-like public construction projects. Fly into any decent-sized city anywhere in the country and you are likely to find at least one giant public building built with grandiose vision but hazy purposes. Stadiums and arenas that no one uses, for example, dot the country. Some were built for one-time soccer tournaments and can now be rented out for a few bucks an hour. The basketball arena in Shanghai where the NBA and Team USA have played exhibition games the past few years is a good example, built in the middle of nowhere, over an hour from central Shanghai. Beautiful arena, bizarre location.

So when I drove up the NJ Turnpike to Exit 16 and saw the bizarre Xanadu complex rising out of the former Continental (now Izod) Arena parking lot, I felt just like I was back home in China! What an insane project. And to see it going up now, with the state –where I live and pay taxes — in such desperate financial straits and essential services being curbed.. well, it’s just nuts. And then I pulled into the complex and saw the new Giants Stadium rising next to the old Giants Stadium and thought about the fact that the Nets are supposed to pull out of here soon — not to move to the beautiful new Prudential Center down the road in downtown Newark but to a fantastical, not-even-close-to-being-built $1 billion arena in Brooklyn and the mind just boggles.

The current economic climate will hopefully bring some common sense back to dollar and cents decisions at least and I hope that one of them will be a reconsideration by he Nets about where they will be playing their games in the future. Newark just makes too much sense to ignore.

As for the event itself.. well, it didn’t make me miss China any less, but it was a nice outreach effort by the Nets. A busload of people came in from Chinatown for the game, team introductions were handled by a Chinese announcer, done first in Mandarin and then in English. Yi Jianlian was, of course, the man of the hour, addressing the crowd in Chinese to say thank you for the support before the game.

There was a good contingent of Chinese press — a few extra guys on top of the seven or eight who cover every Nets game — and I enjoyed speaking a little Mandarin with them, as I fight to maintain my hard-earned language skills.

Unfortunately, once the game began, Yi only lasted a minute and half before picking up two fouls and going to the bench. He had hit a top of the key jumper for the Nets’ first points.,much to the crowd’s delight.After that he was in

and out of the game, often looking tentative and lost but flashing some sweetness as well, including a nice jam on a baseline feed from Devin Harris and a few tough rebounds in traffic. He remains talented but enigmatic.

Speaking of which…Sean Williams got some extended burn for the Nets, due to those fouls on Yi and Brook Lopez also drawing whistles, and he flashed some intriguing skills. He finished with just 2 points and 1 board, but he also blocked 4 shots in 19 minutes and consistently threw David Lee off rhythm in the post.

It was an exciting game that came down to the final minutes. The Nets rose to the occasion, with strong play by Harris, Lopez, VC and Bobby Simmons, while the Knicks wilted. There was plenty of blame to go around, with matador defense their standard, allowing Harris easy layups all game. But Larry Hughes deserves special mocking for a truly putrid display of weak minded, heartlessness.

With under two minutes left and the Nets up one, Hughes was stripped near midcourt by Simmons. He may well have been fouled, but while Hughes whined at the refs, Harris picked up the ball and dribbled half speed down court for an uncontested layup. My fifth grade coach would have made me run laps and do pushups for this offense. Unacceptable!

Rookie Danilo Gallinari was a bright spot, all game, looking sharp with crisp passes, a sweet stroke and even a few defensive stops.

About 20 minutes after the game, there was a Chinese show, featuring several performers, from kids doing a traditional lion and dragon dance to a tenor belting it out in Chinese. Maybe 2,000 people stuck around for the show, moving down to the lower level. I enjoyed the show myself before heading out into the New Jersey night, passing Xanadu on my way to my car.