Chris Bosh Ready to Play Center for the Miami Heat 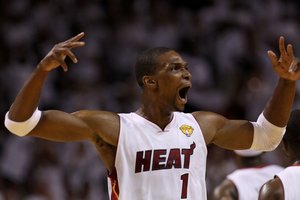 Chris Bosh was the only star player at the Miami Heat’s informal workout yesterday, so I’m assuming he felt the pressure to make news without Dwyane Wade and LeBron James in the gym.

After running away from the role last season, and getting predictably criticized for it, a noticeably bulked-up Chris Bosh told the assembled press corps that he’s prepared to mix it up underneath the hoop a lot more this year for the Heat.

“You know, as much as every time I try to run from it, it just comes and pulls me back in,” he said during the start of informal team workouts Thursday at AmericanAirlines Arena. “So I accept it. If I’m a five, put me down there, have me guarding the biggest guy, I accept the challenge. It is what it is. Every year that I’ve said ‘Oh, no, I’m not doing it,’ I’m in there anyway. So, I accept it.”

“Leaps and bounds better in my opinion,” he said of his revised physique. “But that was one of the things, not only did I want to get better on the court, but I really wanted to get in there in the weight room and really put a lot of work in and improve my body and improve my endurance and be in the best shape possible coming into this season, because it is physical down there and there shouldn’t be a season where I don’t average 10 rebounds. I feel like I let my team down, so that’s not going to happen again. And the only way I can do that is to get stronger, get more physical and be more of a presence on the boards.”

Hilariously, Bosh boasted to the media that he now bench presses between 50-70 pounds more than he used to.

Chris Bosh, still stinging from the Miami Heat’s NBA Finals loss, sounds like he’s ready to shed the “soft” label and dominate on the inside. Whether anyone else but Bosh is prepared to believe that, remains a mystery.