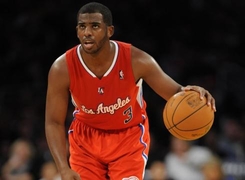 Once LeBron James turned down the opportunity to run for the job, Chris Paul stepped in. Not a bad consolation prize for the NBPA.

CP3 is the union’s new president, replacing Derek Fisher (who, were it not for David Stern, Paul nearly succeeded as the Lakers’ point guard in 2011.)

Paul becomes the first superstar to hold the NBA players’ association president’s job since Patrick Ewing’s term ended in 2001. He vowed to build consensus among players while growing the game on multiple fronts. “I wouldn’t have taken this job on if it was going to be me doing it alone,” Paul said during a conference call. “The other guys on the executive committee are just as important as I am. There’s not one guy who’s bigger than the group.”

Paul’s election was a surprising development. Free-agent guard Roger Mason Jr., the only player to publicly announce his candidacy for the president’s job, was instead elected first vice president. Lakers guard Steve Blake and Charlotte Bobcats forward Anthony Tolliver were elected as vice presidents on the union’s executive committee, replacing Paul and Mason. Paul, 28, gives the union a charismatic and outspoken leader who has been active with the organization since his rookie season, when he was the players’ representative for the Hornets. He served as a vice president on the executive committee the last four years.

Jerry Stackhouse, one of the more vocal union leaders, resigned as first vice president and will take another unspecified position within the organization. The search for a new executive director continues.

Chris Paul should bring superstar heft and influence to future NBPA meetings with NBA team owners, something players have lacked at the negotiating table for over a decade.