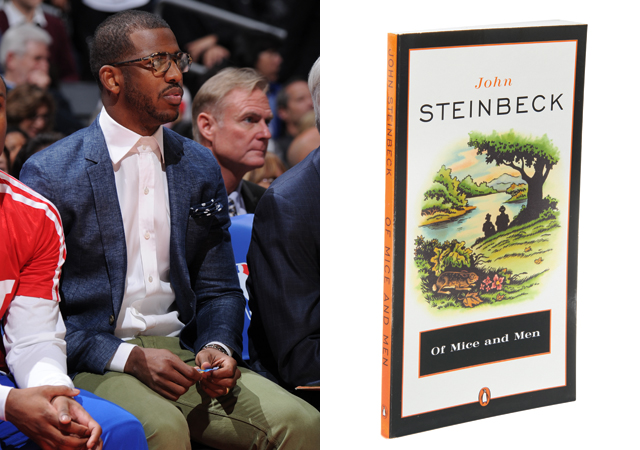 Chris Paul, I suggest you read John Steinbeck’s Of Mice and Men, the story of a leader, a friend, who has to make the most difficult of choices.

George is shrewd, calculating, smart. George is you. He has a dream of owning land and living the sweet life of a farmer. This is a noble yet humble dream, sort of like how you wish you were an insurance claims adjuster. But George is not the character that readers remember.

Anyone who has read Of Mice and Men remembers the loveable Lennie, a big guy with physical skills who doesn’t have it all upstairs. It’s kind of like having a big man on your basketball team who flies over the rim and gets all the highlights and attention but has a low basketball IQ. He’s fun to read about, but that Lennie is a real pain for George. The problem with a guy like that is they keep messing things up for you, a born winner who’s had to carry a heavy burden your whole basketball life.

George and Lennie live their life on the run. They have to escape from places that were holding them back. You got out of New Orleans so you know what it is to go out of town looking for work. Reading this novella is a little happy trip down memory lane for you. If for some reason you’ve wondered if you made the right choice by moving on, don’t worry, you did.

George and Lennie have a boss named Curley. He’s not such a nice guy; definitely a bully who enjoys abusing his power. You know him as Donald Sterling. We could get into the characters and all of the ways George has to cleverly manipulate his situation in a depression era setting like you manipulate lesser point guards. Just stay away from Curley’s wife and you’ll be fine.

The ultimate theme of the novel is the death of the American Dream. George and Lennie have this vision and they believe that through hard work they can achieve it, but there is something haunting them that will never allow this to happen. Everyone wants to play for the Lakers, winning Championships, but when you don’t get that shot, you end up where you are. And let’s be honest, you know your team is cursed and something tragic is coming. George has to make a tough call at the end, a real pronounced break from his partner. The way things are going, you may find yourself in a similar position soon. Read on to find out how George handles it.

I know it’s L.A. and there are tons of distractions, but it seems like your career could be at a bit of a crossroads and John Steinbeck’s words could provide some clarity.