Chris Paul to Pau Gasol: I’m Not One of Your Kids 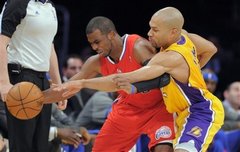 Though it was certainly an entertaining, seesaw affair that more than lived up to the hype, one could argue that the best moments from last night’s Clippers/Lakers showdown had little to do with actual basketball.

We had plenty of hard fouls and cheap shots (highlighted by the Artist Formerly Known As Ron Artest hilariously wrestling Blake Griffin to the ground for no good reason), and things stayed testy between the two teams even when the final score was no longer in doubt.

As the Lakers put the finishing touches on a 96-91 win at home, Pau Gasol took exception to something Chris Paul said, and tapped the Clippers’ superstar point guard on his head. This enraged CP3, who tapped Gasol back while yapping away. Paul explained his side of the story to the media.

The game featured plenty of sharp play, including several moments of brilliance from [Kobe] Bryant and Blake Griffin, but also six technical fouls, plenty of extracurricular talk, and the ejection of the Lakers’ Josh McRoberts for scrapping with Reggie Evans. That’s all before Gasol’s postgame gesture prompted a furious response from Paul, who had four points and 12 assists for the Clippers in his return from a five-game absence because of a strained left hamstring. “He touched the top of my head, and I didn’t like that,” said Paul. “You know what I mean. I don’t know if Pau’s got kids, but don’t touch my head like I’m one of your kids. I don’t know what his intentions were, like, ‘I’ll treat him like little Chris.’ I don’t know if he’s got kids, but I’m not one of them.”

Gasol, who has no kids, insisted he was misunderstood. “I’m sorry he felt that way,” the Spanish 7-footer said. “I do that all the time with my teammates. Nothing mean about it.” When asked what Paul yelled at him after the game, Gasol called it “just trash.”

An amused Kobe Bryant — who also exchanged pleasantries with CP3 in the closing moments — chalked it all up to Chris Paul being “chippy”, which he appreciates and can relate to.

The third and final regular season installment of this turf war will take place on April 4th. And if we’re truly lucky, these two teams will get a chance to battle it out come Playoff time.