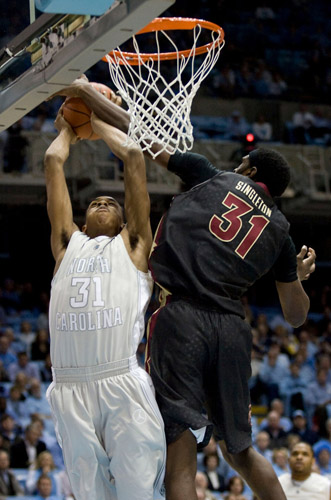 After bringing his Florida State Seminoles to the Sweet Sixteen, junior forward Chris Singleton announced that he would enter the 2011 NBA Draft. Singleton led the Seminoles to three consecutive NCAA Tournaments, ending a decade absence from the Tourney. Along the way Singleton earned the ACC Defensive Player of the Year Award and a reputation as a versatile, lock down defender.

This season, Chris averaged 13.1 points and grabbed 6.8 boards a game. Sidelined in early February with a fractured foot, he returned in time for a post-season push the Seminoles hadn’t seen since Sam Cassell was in maroon and gold.

NBA scouts have taken note. With a 6-9, 225-pound frame, Chris’s defensive intensity and ability to guard the 1, 2, 3 and 4 positions have Mock Drafts projecting him to go anywhere from the 12th to the 25th pick on June 23rd. We heard from Chris two weeks ago and like you’d expect, a lot has happened since then. Here’s Chris with what he’s been up to.

As told to Dan Shapiro

I’m back in Chicago after a crazy week. Since my last update, I’ve been going around the country working out for different teams. This past week included workouts for Cleveland, Golden State and Charlotte. My schedule’s intense but its part of all the excitement building up to the Draft. This is the best kind of hard work.

All the work I’ve been putting in with ATTACK athletics in Chicago has really paid off. These are the workouts where teams want to see how you play against other potential Draft picks. Enes Kanter, JaJuan Johnson and Marshon Brooks among others, were with me this week. I’m lucky to be paired up with great talent that brings up my game. On top of that, they’re also cool guys making this whole process more enjoyable. It’s surreal realizing my NBA dream. In Charlotte I met Michael Jordan for the first time. MJ’s the greatest ever and playing in front of him was an honor.

As far as the workouts are concerned it’s a lot of drilling. Coaches want to see your strengths but also test your weaknesses. I feel pretty confident coming out of these workouts. I continue to improve on my ball handling and consistency in my jumper. With those skills and my D, I think I’ve been showing teams the versatility that will make me valuable to whoever drafts me.

Even though the travel is exhausting, it’s cool to get to see the different cities. I’ve been able to get out a little after the workouts and walk around, catch a bite to eat and chill with the other guys for a little bit. Mostly though, it’s all about resting up, watching the game and getting ready for the next workout.

Last night in Chicago, I went out to watch the game (Game 3). DWade was incredible and Bosh showed that he could step up with his clutch jumper. I’m not really pulling for any squad, its just fun watching the NBA at its best.

This next week should be hectic like last week. Which is fine by me, this process is a dream come true. Today I’ll be at ATTACK athletics and put in a solid workout. I’m still waiting to hear the specifics of my schedule this week but it’ll be some more workouts and I even might be able to spend some time at home with my family for a little. They’ve been crazy supportive through this whole thing and seeing them will be great.

Otherwise, that’s it for now. Enjoy the beginning of your summer and stayed tuned for my next entry!