Chris Wallace and the Early Entries 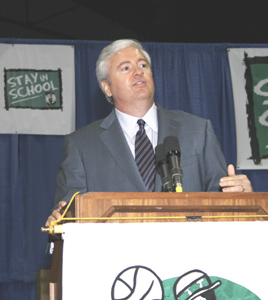 Before we get to where the agent-less early-entry candidates stand on their decision day, Chris Wallace was named GM of the Memphis Grizzlies today. If you’re wondering why, like the rest of us, I invite you to his HoopsHype page–a mystical place of wonder and magic!

Look over there! It’s a commemorative plate of when he drafted Chauncey Billups that was given to him from his mother (Rick Pitino) and his grandmother before that (M.L. Carr)! It would’ve been beautiful and timeless, perfect for the collection, had he not given it away midway through the season to Isiah Thomas for the NBA’s equivalent to Gladware in all its infinite disposability. Little Lucky Isiah was then able to trade that plate in for ten years’ worth of bad decisions. Inflation, these days!

Then Chris drafted Paul Pierce! Ah, such a sweet move to pair him with a then-disproportionately large-headed Antoine Walker. They will wiggle their way down the yellow brick road that is the Eastern Conference straight to a championship, he thought. They already have Bruce Bowen, they already have whatever the hell they just got for Chauncey Billups, Chris Wallace just signed a guy named Marion Garnett, who has to be good. I mean, c’mon, look at that guy’s name!

“Just one more player,” he said. “That’s all we need for that first NBA Championship since that Larry guy that everyone keeps talking about.” How about Jerome Moiso? Nope, didn’t pan out. Kedrick Brown? You’re telling me he’s never actually played basketball before? But he said he could touch the ceiling or he’d give us our money back. Yes, any ceiling. Too bad. Joe Forte? He had a jumpshot in college, I swear.

So, Chris thought, hopping along on his merry way all the way up to the tippy-tip top of the enchanting tale that is his HoopsHype page that maybe he just had bad luck with draft picks. Maybe all of the last four were rotten.

So he decided to trade Joe Johnson for Rodney Rogers and Tony Delk. Swift.

These are the Celtics that could have been: Chauncey Billups, Joe Johnson, Paul Pierce and Bruce Bowen.

But Chris, like all other good GMs, decided not to look back on his yellow-brick road that had browned, weeded and cracked to disrepair, continued to hop merrily and yelled joyously, “You know what? Screw it. I’m just gonna trade for Vin Baker.”

And so he did. Now he is a Grizzly. The end.

Now onto the Early Entry candidates who are flipping coins this evening. I’ll try to update this list, but DraftExpress is doing a great job of keeping up with their sources.

Thaddeus Young – Georgia Tech – IN
– Never got the superstar comparisons he draws because his 15-footer needs some work, but he’s uber-gutty with his slashing and has tons of athleticism. I heard his wingspan allows him to touch some low-flying planes, so if you like the Josh Smiths and the Josh Howards of the world (and who doesn’t?), you better be rooting for your mid-lottery team
to take a flyer on the best Yellow Jacket since Chris Bosh.
Dominic James – Marquette – OUT
– One of my favorite players in college hoops because he’s an undersized, volume shooting point guard that could take over the tournament by himself. He had this wretched year, though, where he shot less than 30% from the field for a long period of time, so I don’t even know why he wasted his one year to pull out. He’s a workout warrior, too, so he’ll
never go all that low.
JamesOn Curry – Oklahoma State – IN
– 6’3” shooting guard with a bad record. Usually a horrid decision, but Curry has cleaned up his act and scored 17.2 per at a high clip last year. Another year wouldn’t kill him, but he should be a second rounder this year. Otherwise he’ll keep working on those outstanding warrants!
Marcelus Kemp– Nevada – OUT
– OHMYGODAREYOUONEOFSHAWNKEMP’S72KIDS?
Mike Conley and Daequan Cook – Ohio State – Apparently IN
– Conley’s stock is never going to get this high again, so I like the move. His Dad better get him in the top-7 or he’s so not doing chores for like a week. The fact that Cook has declared screams of a concession to me. His stock is considerably lower than it was in high school proves to me that he just wants to be in the NBA. He could have this Ohio State team to himself next year and could take all the shots he wanted, but he looks like he’s
cutting his losses.
Spencer Hawes and Jason Smith – Washington and Colorado State – IN
– Filling up the Hibbert slot nicely are Hawes and Smith, who have been awesome in workouts (especially the latter). Problem is, there’s only one Hibbert slot. I’m not so sure teams are all that interested in untested project centers in the late lottery anymore (see: any center picked between 7-14 in the last ten years). Andris Biedrins and Andrew Bynum were the only ones that worked out, right? Whatever. Billy Knight is in this lottery so one of them will have a job.
DeVon Hardin – Cal – OUT (SHOCKER)
– Probably the right decision, but a lot of teams didn’t even think he was entertaining the idea of returning and websites were already reporting that he was staying in the draft. Definitely the right decision, though. Hardin is a beast defensively and is a top-7 pick next
year if he can get his stuff together offensively and the 2008 class stays weak.
Nick Young – USC – IN
– OJ Mayo is bad news either way for Nick Young. Either USC sucks because Mayo’s ego overtakes the team, or the Trojans take California by storm and Young is overshadowed by the freshman du jour. Good decision. Good player. Should be a high pick.

Jeff Green – Georgetown – IN
– There is no wrong move here. He has some obvious offensive limitations that are going to prevent him from going any higher than five this year or next year, but next year’s class is thinner and his athleticism and leadership won’t drop him out of the top-10 next year. If he came back with Roy Hibbert, they’d be immediate favorites for next year, but it really depends on how badly he wants to be in the NBA. I guess he wants it badly enough.
Jaycee Carroll – Utah State – OUT
– Good.
Sean Singletary – Virginia– WE DON’T KNOW
– And it’s really starting to scare us here at SLAM. He had a fantastic year at Virginia last year and flirted with some Player of the Year nominations at midseason, and his 19 points per and 4.7 assists per should be enough for GMs to get over the fact that he’s 5’11”. But it hasn’t happened and now one of the best college players in the country might leave early without a degree and might not get drafted. Somebody get this kid on the phone with Dick Vitale immediately!