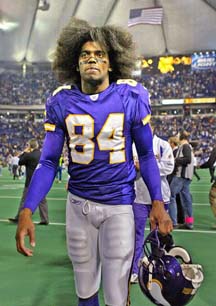 So Chris Webber signed with the Pistons. No surprise there, really. He gets to play for a championship, in front of the people he grew up with. Oh, and he still gets $35 million plus from the 76ers. Good deal.

But then the photo from the press conference came out, and he was standing between Flip Saunders and Joe Dumars, holding a jersey with the number…84? Seriously? This is probably the first time a pro basketball player has held up a jersey with the number 84 on it since the ’84 Draft—if it even happened then. As it turns out, Webber’s usual number 4 is retired in Detroit (for Dumars) and he let a nephew pick his new number.

No word yet on whether the nephew was a big fan of Randy Moss in his Viking days, or a big fan of George Orwell or just likes polonium. But what IS sure is that Webber will take the court for the Pistons…as number 84. Weird. Although I suppose he IS semiperfect (go back to the “polonium” link).

Basketball players have been wearing high numbers since the first days of professional basketball—George Mikan wore number 99 for the Minneapolis Lakers—but they fell out of vogue somewhere along the line, and didn’t return until the ’90s. Shawn Bradley wore 76 (because he’s 7-6), Gheorge Muresan wore 77 (because he’s 7-7), and Dennis Rodman wore 91, 70 and 73 (because he’s crazy). Currently, Ron Artest is wearing 93 for the Kings after wearing 91 with the Pacers (because he’s…well, you know).

Welcome to the club, Chris. And for the Pistons’s sake, let’s hope you most resemble Mr. Mikan. Um, in his prime, of course.