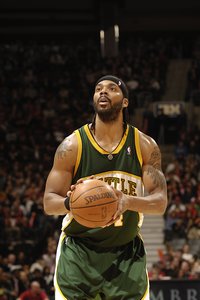 Talk about a crappy way to start your offseason.

Sonics big man Chris Wilcox was arrested this past Saturday night in North Carolina on a gun charge.

Wilcox was arrested along with a friend in Bladen County on charges of carrying a concealed weapon and was released on $500 bond. Carlos Deandre Gathers also was arrested and released.

This is the second time that Chris has been arrested on a weapon charge. Next season will be the third and final year of his current three-year deal.

It’s more than safe to say that he’ll be hearing from the League very shortly, if he hasn’t already. Care to guess if he’ll face a suspension?