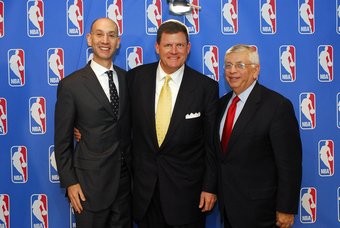 Clay Bennett’s master plan has been fulfilled. The Seattle Sonics will play in Oklahoma starting next season, and Bennett was only too happy to pay the price to make it happen yesterday.

In Oklahoma City, Bennett announced the settlement to applause: “We made it. Congratulations…. The NBA will be in Oklahoma City next season, playing their games.”

“The transition and move of the operation of this team begins tomorrow morning.”

Bennett and the rest of the ownership group will have to pay $45 million up front to the city of Seattle, and may have to fork over an addidtional $30 million should the city fail to acquire another NBA team within the next five years – a more than likely scenario.

41 years ago, the Sonics became the city’s first pro team. And now, they must part ways. It’s a time of anger, sadness for the hoop heads of Seattle, but it’s also a time to reminisce on the good times. Here’s a clip of when things were going well in that rain-soaked city.

(Note: Be sure to read Dave Zirin’s take on the situation.)