Cleaning Out My Closet? 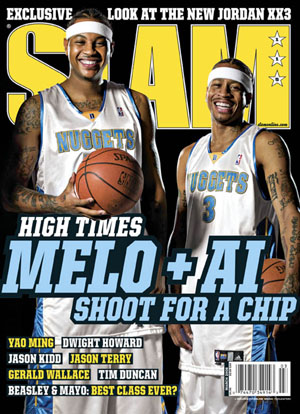 I’m still getting used to being in NBA locker rooms. There are no rules of decorum posted on the door and there’s no tour guide to hold your hand. Someone blesses you with a press pass and after that you’re on your own. So I’ve learned by watching those I respect-and those I don’t-for some tricks of the trade.

Many are simply matters of common courtesy, or common sense. Let a man put his pants on before badgering him. Let him eat too. Wait your turn. Check your breath. You know, basic sh*t, golden rules and whatnot. But there are two traits exhibited by a more cultivated ilk that I’ve found to be integral in achieving any degree of success as a journalist. Knowing when to speak up-along with when to shut up-and how to listen to what’s being said, in addition to hearing what’s not being said. You know, reading between the lines and whatnot.

Recently, my possession of said characteristics was tested by none other than Allen Iverson. He was also kind enough to host an impromptu episode of What Not To Wear.

It’s common for the lig’s superstars not to do media before games, so I didn’t expect to see him at all. But there he was donning his powder blue armor, along with all of the iconic A.I. accessories, from the headband to the finger braces. It was an opportune moment to approach him, Kenyon Martin and another media member were the only other folks in the room, but I had someone else on my agenda so I left him alone. Besides, I had nothing substantive to discuss and I wasn’t going to reveal that by wasting his time. I killed a few minutes chatting with my fellow scribe before he decided to move on to the Wolves locker room, leaving me alone with two NBA All Stars. I remained staunch in my quietude.

It was then that A.I. broke the silence. “You lookin’ for Melo man?” I was. He was coming off of a spectacular summer showcase and had established himself as the leader of a team with heightened expectations. The blemishes on his public persona had faded and Melo seemed primed to shine with the first All-Star start of his career. But f*ck all that, this is SLAMonline. Why talk about basketball when there’s so much good sh*t on TV? I really just wanted to discuss the fifth and final season of The Wire with the Baltimore native. “Yeah.” I replied. Without a word, A.I. smiled and headed back into the trainers room, presumably to find his teammate. Upon his departure, I mistakenly thought of how helpful he was rather than what kind of smile he’d just flashed me.

It wasn’t the cherubic wattage that beamed on the latest issue as much as it was a grin of childlike mischief. And as I sat there waiting for him to reemerge I learned the difference. I discussed the upcoming free agent crop with Eduardo Najera. I watched him and Linas Kleiza eat a mountain of french fries and chicken fingers. I thought about stealing some fruit from the spread in the adjacent room. I watched the previous Wolves game on the big screen the team used for scouting. I watched an assistant coach tutor Nene on defensive post positioning on his MacBook. I played with my phone. I marveled at the strength trainer’s dreads and tan. I wondered what it all really means and if I knew what it meant to find my dreams. I sat there some more. I waited some more. The team’s PR guy said Melo was getting work done on his shoulder.

After the Nuggets triumph over the Wolves I decided to try again. It became immediately clear to me that I was a topic of discussion when his teammates practically ushered me to his locker with an exclamation of “Melo’s over there!” Gee, um, thanks guys. Making my way over to the corner, I crossed paths with A.I., clad in only a towel as he exited the showers. I made no mention of his disappearing act and he said nothing other than “Liz Claiborne…”. I had no idea what that meant or if he was even talking to me, the sing-songy voice with which he uttered it left me with the impression that he was merely amusing himself. Maybe it was one of those catchy rap tunes the kids are always talking about. Whatever.

I stumbled my way through a haphazard introduction to Melo as I tried to pass on a message to him from a mutual friend about a book project. I repeated the name Wes Moore over the background clamor as a nearby K-Mart repeated it for comedic effect. “Who? West Baltimore?” Great, apparently I had an audience. And I wasn’t the only one. “Yo! Look at that sh-t!” someone directed. Melo was being iced down by a trainer on his knees in front of the forward and his teammates let it be known that from their perspective it looked as though he was getting more than one kind of treatment. The trainer hastily finished his ‘job’ and scurried off.

A.I.’s locker was right next to Melo’s and he received equal ribbing while dressing. I was amazed at just how small Iverson was, I had to have at least a couple of inches and about fifteen pounds on the ultimate warrior. His slight frame was enhanced by the XXXXXL wife beater he threw on over his narrow shoulders. His teammates let him know about that too with another round of laughter. “Man my wife bought me this sh-t…” He caught me cracking a smile when he sat down in front of his locker and said nothing but “Liz Claiborne…”. Um, yeah.

Melo told me he wanted to take a shower first and I had no problem waiting. I looked around the room as he undressed and when I turned around I saw him squeezing a big Dove bottle onto a hand towel. Without thinking, I asked “What the hell are you gonna do with that?” He looked at me quizzically before responding, “I’m gonna wash my a$$, that’s what.” I looked at the bottle again. Whoops. “Oh, I thought it was lotion. My fault. I was about to say…” This prompted another round from the peanut gallery, namely Mr.Iverson, and his offering wasn’t original at all. “Oh, he thought it was lotion, he was about to say…” Melo laughed it off and headed to shower, but A.I. seemed more concerned with mocking me than anything. I could see how my mistake could have offended Melo, but I was clueless as to how I’d drawn the attention of his fellow All Star…..

“Alright G*ddamnit, I know exactly what the f*ck you’re talking about! It’s my shirt, ‘aint it? You don’t like it? Then say so! And no, it’s not pink, it’s more lavender motherf*cker and despite all of your inferences to the contrary, it does not make me gay! Stop acting like I tried to touch you in your bathing suit area or some sh*t! Christ! And if we’re gonna start questioning people’s fashion decisions, why don’t you tell me why you’re covered in navy blue corduroy head to toe?! Nice hat. Who the f*ck are you supposed to be, Paddington Bear? Are you a big David Sedaris fan? Huh?!”

At least that’s what I thought. I said nothing. I knew better. Any response I could’ve made would only have depicted me as paranoid or unable to take a joke. And the banded bundles of cash literally spilling out of his pockets reinforced the truth that he wouldn’t give a f*ck what I thought about him if I said anything anyway. I talked to Melo for a few minutes and headed out, pride intact. I still love that shirt.

To this day, I’m not sure if I was just included in some playful banter or if I was genuinely disliked. I told myself it didn’t matter either way. I’d still have a tremendous amount of respect for Allen Iverson as a basketball player and wouldn’t judge him as a man, regardless of his intentions. But I still didn’t like his shirt.

So for the record, no, I’m not gay. Not that there’s anything wrong with that.