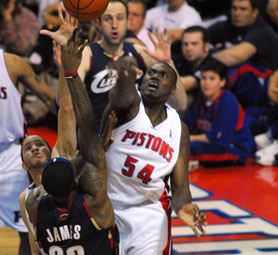 Of course Game 1 was all about Bronny. First Conference Finals of his career, playing against his early-career nemesis — the game was going to come down to him in some way. But at first I thought I was going to end up writing about how LeBron did enough little things to squeak out a victory and steal home court advantage. During the fourth quarter, my boy Gee IM’d me, up in arms about LeBron having just six points and no free throw attempts, wondering how it was possible for Cleveland to still be in the game. I noted that Chauncey was having an equally horrible shooting night, plus umpteen turnovers and (as much as Magic and Kenny and Chuck want us to believe that no single Piston is very important) Chaunc his nearly as vital to the Pistons as LeBron is to the Cavs.

But then the kick out to Donyell Marshall happened and — once again — the talk of Bron’s killer instinct (or lack thereof) was front and center. I think Kenny said it best when he noted that Bron’s choice to swing the ball to Donyell for a potential game-winner wasn’t a bad pass, but it wasn’t a great play. Replays from multiple angles showed that Bron had beaten Tayshaun. With Tay on his huge right shoulder and Rip offering (in uncharacteristic Pistons-rotation fashion) weak help from the left, Bron could have easily gotten a bucket AND the foul. This dude is one of the greatest finishers in the game (maybe the best) and he elects to swing the ball to Donyell for a 22-footer when he was, like, 5 feet from the cup?! Word?! Who cares if Mike Brown designed that play or not? I kinda expect that from him. But like Barkley said after the game, in those situations, franchise players should almost have tunnel vision, specifically when a clear path to the basket presents itself like it did for Bron last night.

And, of course, like I expected, we got a lot of talk about how MJ trusted his teammates in similar situations — once with Kerr and another time with Paxson. First, they were entirely different situations. And second, one never even happened.

The most rational rebuttal for this flimsy rationale is that by the ’93 (Paxson) and the ’97 (Kerr) Chips, Jordan was no longer building his rep as a late-game hero. He had won enough games, dominated enough supremely important fourth quarters, suffered enough heartbreaks and weathered enough storms for his role on the team and own personal psyche to be as stable as it gets. Bron is still building his rep with himself, his squad, his opponents — everyone. The same way he took over in last-minute situations against the Wiz last season; he should’ve done so last night.

So having clarified the obvious difference in meaning and import for Jordan making a similar pass as opposed to Bron, you get to the actual game situations. Paxson took his shot in the final seconds of Game 6 against the Suns, down 98-96. Chicago was 3-2 in that series. Stakes are higher. We could say that, correct? Kerr stepped up and knocked down his mid-range winner with the Bulls tied 86-86 in a tight Game 7. He misses the shot, they go to overtime. Who you bettin’ on, Jordan or Malone? Yep.

Now as for Paxson’s shot, which people love to falsely remember as some example of Jordan trusting his teammate: That’s not how the play transpired. MJ didn’t kick it out to Paxson. Horace Grant did. MJ got the ball in the backcourt and swung it to Pippen when the trap came. Pippen took it from the top of key, drove hard to basket and dumped it off to Horace who could’ve put up a short 5-footer on the baseline. But Horace chose to kick it out to Paxson for three. If Paxson misses, I guarantee MJ is fuming at Pippen for not being a tad more patient and waiting for Jordan to come get the ball again and even more furious with Horace for passing up the gimme for a trey. What does LeBron do after Donyell’s miss? He’s slappin kats on the butt with this wack “it’s aight” expression his mug. It ain’t alright, Bron. YOU win the game. You are not John Stockton.

Kerr? It’s kind of simple. Jordan was triple teamed, saw one of the best shooters in NBA history wide open for a 16-footer and swung it to him, knowing that the game was tied and they’d have another shot were Kerr to miss. Even still, I think everyone was mad puzzled when watched that play live. It was like, “Wait, MJ passed it?”

I just doubt MJ, Kobe or even Wade-Melo would’ve passed up that bucket so that Donyell could “potentially” knock down a game winner. And enough with this going for the win on the road. Perhaps the Cavs were just a little apprehensive about taking things in OT. Seemed that way.

Magic said Bron was gonna rep hard in Game 2 and I tend to agree with him. We’ll see. If I had it my way, it’d be another close game and we get another chance to see how Bron gets down when it’s G-time. ‘Cause last night was disappointing.