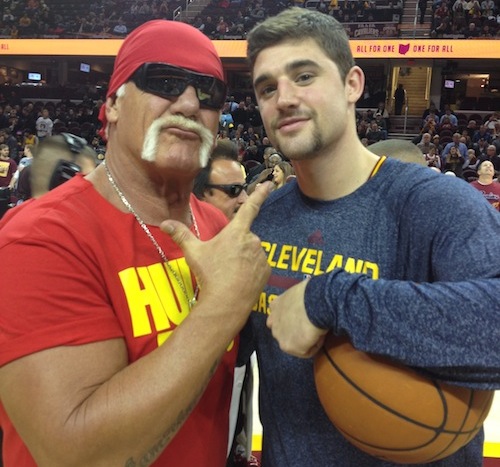 The Movember Foundation is a leading global organization committed to changing the face of men’s health. During November, the foundation heightens its awareness for prostate cancer, testicular cancer and overall men’s health by sparking a conversation about doctor visits and checkups. That dialogue is advanced by encouraging men to grow some form of a mustache during the month-long campaign.

Led by Aussie guard Matthew Dellavedova, the Cleveland Cavaliers—like other teams around the League—were happy to participate in the movement that originally began in Australia back in 2003. The second-year pro from St. Mary’s was joined by teammate Anderson Varejao, along with rookies Joe Harris and Alex Kirk for the Cavaliers installment of Movember.

The Cavs’ Movember crew spoke with SLAM about whose facial hair has been most impressive, the events surrounding Harris’ meeting with Hulk Hogan, LeBron’s impact on mustache design, and more.

SLAM: Whose facial hair has been most impressive?

Anderson Varejao: I’ve been impressed with Joe Harris. He has a pretty good mustache. Alex Kirk, he’s doing pretty well, too. But now Delly—it took him at least three weeks before you could see anything. So it was a rough start for Delly. But you know, lately, he’s doing okay. Right now he has a pretty good mustache, he actually looks like he’s from Boardwalk Empire.

SLAM: Sounds like Dellavedova is struggling with his mustache.

Joe Harris: Oh yeah, totally. Delly was pretty weak to start the month. He can grow a good neard—you know, that old neck-beard thing? But his mustache definitely needed some work. Maybe he should use some conditioner or something like that to get the hair follicles going in there a little more. Now, AK and I? We have pretty serious growth. Anderson, his mustache is solid. But you can guess that Andy would’ve grown a quality mustache.

SLAM: Matthew, there have been multiple reports indicating that your mustache was extremely slow to develop. Do you have a comment on that?

Matthew Dellavedova: My mustache did take a little bit of time. I think I had it there, though, it was just coming in lighter in color than the other guys. Andy and Joe and Kirk weren’t really too happy with my mustache. But I shaved it in, and I think it’s coming in pretty strong now. It’s really not how you start, it’s about how you finish.

SLAM: Is there a chance any of you stick with the mustache after Movember concludes?

AV: I’m not sure. I keep getting phone calls and text messages from my friends in Brazil. Some of them think it looks good, but some of them just make fun of me. They say, what is that? Why do you have that mustache? Then I have to explain to them, which is what makes this fun. I tell them why I’m doing it. It’s for a good cause, for prostate cancer awareness, to raise money and help with that. I explain Movember and they get it. They say, Oh okay, I knew there was a reason why you had this stupid mustache. Then they all tell me it looks terrible.

JH: Since the Hulk Hogan picture, I’m finding out that a lot of people are not 100 percent on board with the handlebar mustache look. I’ve been told that it looks like I have dirt on my face. But I tell them, you need be there in person to see the full effect. It’s starting to come in pretty thick. Not quite Hulk Hogan’s level, obviously, but he has some years on me. I think if I really wanted to keep it going I could get that level. But it’s coming off, for right now, at the end of Movember.

SLAM: Why did you want to get your teammates involved in Movember? And how did the recruiting process go, as far as signing up Andy, Joe and Alex?

MD: We did it at St. Mary’s one year. It was my junior year, all the players and coaches did it. We raised a lot of money, awareness and it was good fun as well. We had a bit of a laugh at everybody. But it’s really a good cause, raising awareness and money for prostate cancer, testicular cancer, and men’s health in general. Sometimes men try to just brush it off by saying, “I’m not going to the doctor.” So it’s good to try to raise a bit of awareness to get checked out, that kind of thing. As far as recruiting, I was asking for some volunteers and Andy was all-in right away. Joey and Alex took a little bit of convincing.

SLAM: What level of veteran influence was involved in helping convince you and Joe to grow mustaches?

Alex Kirk: I was there when they first were talking about the idea. I put my name in, just wasn’t for sure about it. Then, there was certainly some veteran influence used in my decision. I’m not going to mention any names, but maybe there was a guy who wears No. 23 that came up to us and said, “You are definitely going to have mustaches for Movember.” So that sealed it for me [laughs], and it’s been a lot of fun helping to support a great cause.

SLAM: Varejao and Dellavedova have gone with the straight, highway-patrol-style mustaches, often seen complementing a pair of aviators. The rookies have more of a distinct, handlebar design. What was the inspiration behind that?

JH: LeBron thought it would be fun if the rookies did handlebar mustaches. That’s how that started. Not to say that we didn’t want to support the cause, because we do. It’s a great cause. But Alex and I hadn’t done Movember before, and actually never grew out mustaches before. So initially, we were a little hesitant.

MD: Joey and Alex were on the fence, but since they’re rookies they didn’t have much of a choice. The older guys on the team kinda said, You guys are in. But I think those two guys are the two that look the best with their handlebars. It might be good for them to keep it going. I think Andy’s looks great, too. The look suits him, and he might end up keeping it going after Movember also, who knows. I’d like to try for the handlebar next year. My dad had a mustache when I was growing up, though his was thicker than mine. I tried to go for the mustache-style he had back then. But Joey getting his handlebar picture with Hulk Hogan, that’s been a real highlight for us.

SLAM: Take me through that meeting with Hulk Hogan. You got your picture taken with him during pregame warmups in Cleveland while rocking your handlebar mustache. How was that experience?

SLAM: Since that picture, have you noticed your mustache intimidating the other team at all on a nightly basis?

SLAM: Could you see yourself helping Delly lead the Cavs Movember movement again next year? And is there a facial hair style you’d recommend for future rookies?

AK: I definitely would next year. In high school, I had that goatee with the random spot of hair on my chin. So this isn’t totally new for me. Some people certainly think I look pretty funny, but as long as it gets the message across that the Cavs are supporting men’s health, raising awareness for Movember, that’s what matters most.

JH: I’m definitely doing Movember again and encourage everyone to do the same. It’s really been fun. I haven’t thought about what I’d recommend for rookies next year yet, though. I would probably make them go with handlebars. I think it could be like a rookie thing with the Cavs now during Movember—rookies grow handlebars. Sometimes it could even turn out like me, and they’ll look pretty sweet with it.

Brendan Bowers is an NBA writer who covers the Cavaliers and the NBA in Cleveland for SLAM. Follow him on Twitter @BowersCLE. Photos courtesy of Cavs.com.