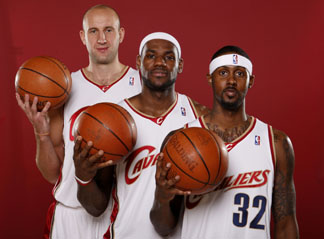 Raise your hand if you think the Cleveland Cavaliers’ run to the 2007 NBA Finals provides a clear sense of how good this team is and where it stands among the Eastern Conference hierarchy.

Now put your hand down, because you’re a liar.

Or maybe you’re stupid. No offense, but it’s a possibility. I think it has to be one or the other. You are either a fool, or willfully fooling yourself, if you claim, with any certainty, that you know what kind of team the ’07-08 Cavs will be.

It shouldn’t be this way, of course. Logically, a (relatively) young team led by a young, improving superstar, returning most (and possibly all) of its key players and coming off an NBA Finals appearance should be favored to make another deep playoff run and once again contend for a big, shiny Larry O’Brien (or at least for the right to once again get swept in the Finals by the team that actually deserves it). And yet, just as logically, this particular young, superstar-led squad seems to promise nothing of the sort. Here, friends, are a few of the myriad reasons why:

1. They weren’t actually that great last year. This isn’t news. We all know it. Before last season’s playoffs started, only LeBron himself might possibly have expected the Cavs to actually play in the 2007 NBA Finals, and if he did, it was because he’s so absurdly confident that he literally thinks he can do anything. Yes, I said “literally” and “anything,” and I meant both. But we all knew going in that, while this might not have been the worst NBA Finals team ever, it had a place in the discussion: Not enough postseason experience, no clear-cut second scoring option, etc and so forth. The way the Spurs dispatched them pretty much confirmed it.

2. The East got better. Actually, this is a tricky one. Did the entire Eastern Conference really improve all that much, or just the Celtics? Maybe it doesn’t matter. The fact is, the Celtics now have the best trio in the League; you can argue all you want that they don’t have enough after Kevin, Ray and Paul, but then, we were just talking about how the Cavs were a one-man team with a weak supporting cast, weren’t we? By that logic, on paper, isn’t Boston pretty much immediately a better team? I say yes, and so this statement must be true.

In all honesty, the East might not actually be any better this year, top to bottom. Maybe the Nets still have that gaping, eternal hole in the middle. Maybe Miami’s still too old and injury-prone. Maybe the Bulls still can’t score more than the Bears. Maybe the Pistons still won’t get past the mental frailty that has plagued them the past few years. Maybe the Magic and Raptors still aren’t quite ready. Maybe the Wizards are still the Wizards. Maybe the Knicks… er, never mind. Regardless, if we assume all other things are equal, the mere presence of the reborn Celtics alone means there’s at least one more substantial obstacle in the Cavs’ way of getting back to the Finals.

3. They can’t be this lucky two years in a row. Specifically, Cleveland can’t possibly have the luck of the playoff draw they had last year: playing a Wizards team that was missing 97 percent of its offense, a Nets team that couldn’t even win the Atlantic and a Pistons team coached by Flip Saunders. In retrospect, the League probably should have just given them a bye to the Finals.

4. They might not even be as good as they were last year. See Reason No. 1 for why this is a problem. Negativity aside, the ’06-07 Cavs weren’t bad. Eastern Conference schedule or not, they did win 50 games. Lucky or not, they did make it to the NBA Finals. They did not suck. The problem is that they can’t count on equalling last year’s success, even in the regular season. Training camp started Monday, and restricted free agents Sasha Pavlovich and Sideshow Varejao — without either of whom the Cavs don’t make that Finals run — weren’t there. Even if Cleveland manages to get both of these guys re-signed, there’s no guarantee this team will be as good as it was last year. And if not? Well, I appreciate Mike Brown’s optimism, but new signings Devin Brown and Cedric Simmons seem unlikely to lift this team to new heights.

5. LeBron’s role still isn’t clear. Not sure if this is Mike Brown’s fault, or a sign of LeBron’s youth, or the fact that they still don’t have a lot of talent. But the fact is that, game to game, even quarter to quarter, LeBron still seems to veer from takeover scorer to set-up man to, too often, that player who stands out on the wing watching less talented teammates take bad shots and wondering why none of them just give him the f*cking ball. This needs figuring out. Now.

6. They still have Eric Snow and Damon Jones. The word you’re looking for is “liabilities.”

Alright, enough of that. The Cleveland Cavaliers are the defending Eastern Conference playoff champions. They have a legitimate MVP candidate and top-five all-around player in LeBron James. They’ve got proven vets like ZZZZZZZZZZ Ilgauskas and Larry Hughes, plus younger cats like Drew Gooden and Boobie Gibson who’ve added valuable experience to their occasionally game-changing talent. They’ve showed gradual improvement over the past three seasons, and assuming Sasha and Sideshow are back in the fold, there are lots of reasons to think this team has not yet hit its ceiling.

All of which brings me back to my original point: I have NO IDEA what kind of team this year’s Cavs will be (and note the use of bold, italics and all caps — that means I’m totally f*cking serious). What I have is a window, an open space inside which I can fit the possibilities. Allow me to open that window for you now.

The 2007-08 Cleveland Cavaliers Worst-Case Scenario™: One or both of Pavlovich and Varejao bolt because Danny Ferry doesn’t want to pay them. Z’s stunning five-year run of near perfect health finally gives way, reminding all of us all of the guy who only played 29 games between the ’98-99 and ’00-01 seasons. Larry Hughes keeps getting hurt over and over again. Crazy Drew overshadows 20 & 10 Drew. Eric Snow and Damon Jones remain on the roster. Boobie proves that last year’s playoff showing was a fluke. LeBron gets frustrated. The Cavs struggle to 40-some wins and lose to the Heat or Pistons or Celtics or Bulls in the first round. Everyone remembers that LeBron didn’t sign a max extension last summer. George W. Bush somehow gets re-elected to a third term. Dark clouds. Impending doom. Brrrrrrrrr. It could happen.

The 2007-08 Cleveland Cavaliers Best-Case Scenario™: Sasha and Sideshow both re-sign and are motivated to prove they’re worth their fat new contracts. Z and Larry stay healthy. 20 & 10 Drew makes regular appearances. Eric and Damon remain on the bench. Boobie proves last year’s playoff showing was no fluke. Comfortable with his supporting cast, LeBron and Coach Grimace fine-tune his role. Seasoned by last year’s playoff experience and smarter from their experience against the Spurs, the Cavs edge the Pistons and Bulls in the brutal Central, dispatch the still-too-young Magic, the geriatic Heat and the not-deep-enough Celtics to get back to the Finals. There, they face a talented but flawed Western Conference power: The still-emotionally fragile Mavs; a Suns team on which Amare is still gimpy and Lamar Odom has never been able to match the contributions of the departed Shawn Marion; or a Spurs team that, for all its dominance, simply refuses to ever win back-to-back titles. The Cleveland Cavaliers are your 2008 NBA Champions. It could happen.

Pressed for an actual, definitive prediction by brutal Slamonline dictator Sam “Mr. Met” Rubenstein, I’ll split the difference: The Cavs will win 48 regular-season games, beat someone like Orlando or Toronto in the first round, and lose to Boston or Detroit or Miami in the second round. It’s not abject failure, but it’s not progress, either. Questions will be asked. Futures will be debated. LeBron won’t pull a Kobe next summer, but he won’t be happy, either.