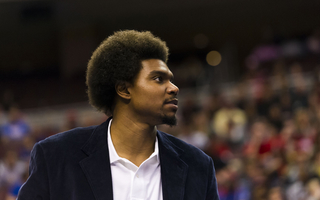 The Andrew Bynum Sweepstakes are intensifying, and seem to have turned into a two-horse race between the Dallas Mavericks and Cleveland Cavaliers.

So far, Cleveland appears to be a lot more determined to acquire the young, oft-injured free agent big fella.

According to reports, the Cavaliers have offered Bynum a two-year, $24 million contract that’s heavy on incentives.

Per Yahoo! Sports and the News-Herald:

Cleveland wants a team option on a second contract year to protect it against losing Bynum to 2014 free agency should his damaged knees heal enough to allow him to make a resurgence this season. The incentives of a possible Bynum contract could include minimal hurdles of completing training camp and reaching minutes and games-played plateaus in the regular season, league sources said. Bynum’s camp has been shopping for one-year, high-money deals that would allow him to hit the market again next year, sources said.

They want to retain salary-cap flexibility for the summer of 2014 in order to make a run at potential Heat free agent LeBron James. One league source said he couldn’t fathom any team offering Bynum a guaranteed contract for more than one year. Teams can’t get insurance on Bynum because of the condition of his knees — similar to the situation the Cavs faced with former center Zydrunas Ilgauskas. The Mavericks could offer about $8 million. The Cavs could offer about $12 million, more if they decided to waive swingman C.J. Miles (which they are not expected to do). This could be a case where having the Cleveland Clinic as a corporate partner would make a huge difference for the Cavs. Bynum’s knees would have to be monitored all season.

Andrew Bynum posted averages of 18.7 points and 11.8 rebounds in 2011-12 with the Los Angeles Lakers prior to getting traded for Dwight Howard. He earned $16.9 million with the Philadelphia Sixers last season, though he missed the entire season due to recurring knee troubles.

His agent has told suitors that Bynum won’t work out for any teams this summer. The 25-year-old center is scheduled to meet with the Atlanta Hawks next.