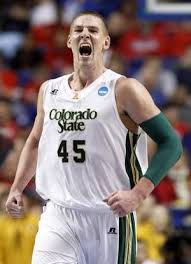 The small town of Yankton, SD, has a population of just over 14,000. The odds that one of its residents would become an NBA Draft prospect are slim to none. But for Colton Iverson, his chances were a little greater than most who call Yankton home.

“I wanted to be an NBA player ever since the day I first touched a basketball,” said Iverson, a projected second-round pick. “My dad was drafted. Both my parents and both my sisters played college basketball. It’s always been my dream.”

Iverson’s father, Chuck, was the fourth pick in the fifth round of the 1973 NBA Draft. Despite his basketball lineage, Iverson didn’t get noticed by recruiters until joining an AAU team out of state. Respect quickly came the big man’s way, and invites to join big-time AAU programs arrived from every corner of the country.

“Things really started to pick up when I went down to Memphis and played for Mike Miler’s AAU team (M33M Elite)—when he was with the Grizzlies—and I had a really good tournament in North Carolina,” Iverson said. “That’s when all these recruiting websites started putting me on their boards in the Top 100 and everything. So it really wasn’t until I started to play for a respected AAU team that I started getting a lot of looks and offers.”

But, in today’s world where eighth graders are nationally ranked, Iverson was far behind the curve. A late bloomer in the recruiting world, the budding star truly blossomed once he received proper exposure.

“I didn’t really start getting recruited by big-time programs until after my junior year [of high school],” Iverson said. “I kind of had a good summer and then I ended up getting official offers from just about every conference. I took official visits to Florida, Nebraska, Creighton, Iowa, Minnesota and unofficial visits to New Mexico, UCLA, just kind of all over. I just kind of looked at a lot of teams in each conference.”

Ultimately, Iverson, with a knack to play physical in the post and crash the glass, was extremely attracted to the gritty culture of the Big Ten and the Minnesota Golden Gophers. He says that the championship esteem of Minnesota’s then-coach Tubby Smith was also a major factor in his decision.

Iverson headed to Minneapolis in 2008 with expectations to challenge some of the most talented big men in the country. During his three seasons in maroon and gold, however, Iverson’s limited playing time prohibited his opportunity to bang with the best of them. Consider the 27th-ranked center in the Class of 2008, Iverson never got solid playing time or was an intricate part of the Gophers’ offensive scheme. He never averaged more than 18.3 minutes and 4.2 field-goals attempt per game, despite his rebounding numbers improving each season.

“I just always thought the next year would be better,” Iverson said. I had an OK year for a freshman in the Big Ten. I thought my sophomore year I would get more time, but my numbers kind of stayed the same. I was always sharing playing time. There were about five centers on the Minnesota team, so I was always sharing minutes and I just never really got as many opportunities that I wanted to.”

The limited playing time was the most discouraging of all to Iverson. He had chosen Minnesota over several other prestigious programs only to spend the majority of games watching from the sidelines. Part was due to his nagging habit of getting into foul trouble; part was due to Smith’s coaching style.

“It was hard to get into a rhythm, just going in and out of games constantly. I wouldn’t even be tired [when I’d come out of a game],” Iverson remembers. “Getting into a rhythm in basketball games is really key.”

Finally, following his junior season at Minnesota, Iverson said enough was enough. He wanted to be a leader. He wanted to join a program where he was going to be depended on to perform every night. He didn’t want to play every minute of his college career looking over his shoulder, wondering whether he would be subbed out for no apparent reason.

He wanted to join Colorado State. A smaller program that had given him a little recruiting attention back in high school, the Rams provided two opportunities for Iverson: a chance to be a go-to player and a mandatory red-shirt year.

“It was tough seeing the team doing really well, but I really used the red-shirt to my advantage and got better every day,” Iverson said. “I spent extra time in the gym, before and after practice, and really slimmed down my body, got stronger in the weight room.”

Iverson also says he spent time during Colorado State’s games studying refs officiating tendencies. He tried to analyze how refs would call games in the first few minutes of action and then see how physical the players could then compete. When Leonard Perry, who as part of Larry Eustachy’s coaching staff, came to the Rams’ program before Iverson’s senior season, he noticed right away how smart of a basketball mind Iverson has.

“The thing that he does better than everything is kind of survey what’s happening on the floor and start thinking about the flow of the game and how he can fit in,” said Perry, associate head coach at CSU. “He does a good job of getting a feel for how officials will call it. That’s tremendous for a guy his size, what he does best is assesses the floor game in terms of how physical he can be.”

In his three seasons at Minnesota, Iverson picked up 208 fouls in 1,727 minutes. In his one season at Colorado State, Iverson was called for just 91 fouls in 1,033 minutes. His progression can be accredited to his studying of the game, but also his improved conditioning—something NBA scouts have noticed during his pre-Draft workouts.

Iverson’s ability to stay on the court greatly benefited Colorado State in ’12-13. Playing just under 30 minutes per game in his senior campaign, Iverson was a double-double machine, averaging 14.2 points and 9.8 rebounds per game. He helped lead the Rams to the NCAA Tournament, a squad that ultimately reached the third round until the fell to the eventual champion Louisville Cardinals.

Now, a 7-0, 263-pound college graduate, Iverson has taken what he learned from his three seasons in the Big Ten and two years learning how to improve his game in the Mountain West and is trying to build on that foundation to increase his NBA Draft stock.

His conditioning is still a work in progress, but he’s gotten his body fat all the way down to a staggering 8 percent. His jumper still needs a little work, but his improvement has impressed scouts and was on full display during the NBA Draft Combine in Chicago. Perry feels that Iverson can turn into a consistently reliable mid-range shooter in the very near future.

“I think he’s going to be a guy who can pick-and-pop and shoot it form 15-18 feet easily,” Perry said. “That’s one of the things he’s going to get better at during his first year and certainly during his second and third year.”

Iverson knows his rebounding and size will translate to the next level. But, his refined jumper and slimmer body could potentially bring the small-town kid to a major NBA city.