Comebacks and closeouts on the road. Not so easy. 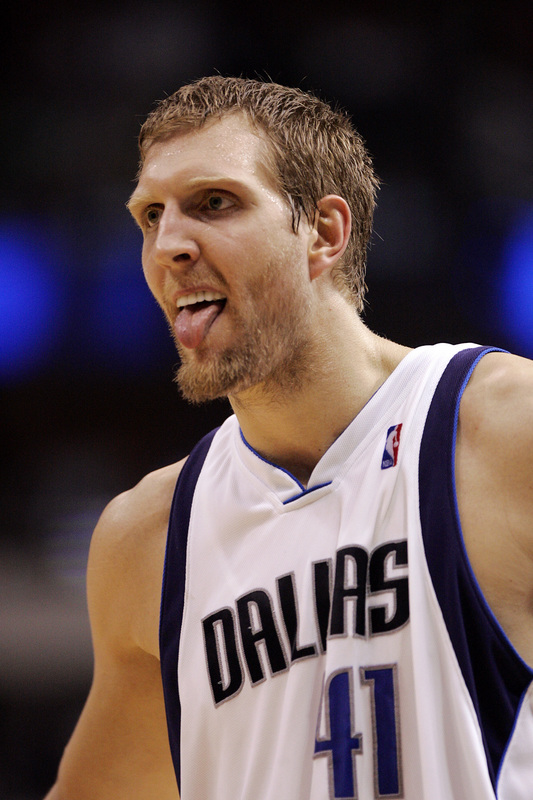 One of the strangest puzzles of the world is the ultra cocky and confident elite athlete who shrinks on the big stage. These guys are worshipped from a young age. They dominate mortals at sports and get everything they ask for from money and favors to girls to male groupies that want to be them. Then when it comes to the big game, we have to wonder about if so and so can hit the big shot? Does he have what it takes? Is he scared?

Dirk finally did something clutch to keep the Mavericks season alive, but for the second game in a row it came when he stopped thinking and started shooting. He is 4 for 4 on threes over the last two games when you can actually see the hamster wheel stop turning in his head and he knows to just throw something up there because his team is behind and out of options. Why not do that all game long? The Warriors play that style, taught to them by Nellie of course. Back when Dallas first became a good team after being a league doormat since the beginning of time, it was because Nellie encouraged Dirk and Nash among others to play free and easy and not be afraid to just let it go. The year they got off to the 14-0 start, I clearly remember Dallas beating Jersey in a game when the Mavs had the lead late, got an offensive rebound and the proper play was to run the clock down. Dirk jacked up a three that nobody was expecting with 23 seconds on the shot clock and nailed it for the dagger. Think less. Shoot more.

Last night Dirk started out strong, then he kept missing little putbacks and open jumpers that he nails in the regular season, and for long stretches of the game he was just floating around the opposite side of the floor from where the ball was. Then at absolute desperation time, he hit those threes and made the key defensive play. Dirk, you are a killer. KILL.

As for the Warriors, they showed so much heart coming back from a 20 point hole. I would argue that Matt Barnes looked like the hungriest player on the floor. And I’m not just saying that because me and my friend were watching the game with a bottle of the goose that my old roommate forgot to take with him when he moved out. You’d think that a statement like that would be goose driven, but it’s not. The Mavs had their lead, the Warriors kept chucking threes and hitting them. Dallas did blow a 20 point lead against the Spurs in game 7 last year before Dirk made the three point play that was supposed to shut up everyone forever that called him soft.

I love this Golden State team. They just keep shooting threes, they’ve got exciting guys like J-Rich and Monta, some really bad tattoos, the polar opposition of Biedrins and Pietrus, Nellie and his feud with the increasingly annoying Mark Cuban, Baron Davis one of the most likeable superstars in the game, Chris Mullin as GM… what’s not to love? I am jealous of Branden from XXL and I wish the Warriors were my team.

The cold reality is that halfcourt execution at the end of a playoff game on the road is kind of important. The Warriors failed at that, and when you end up on the wrong side of a 15-0 run when the greatest upset in NBA history is right there for the taking, you have to wonder about how they feel about themselves. Baron picked up his 6th foul for trying to avoid Devin Harris and Stephen Jackson was tossed for clapping while being Stephen Jackson.

Dallas is the better team and they should never have been in this position. Let’s see how it plays out in Oakland tomorrow night. The fans there are a difference maker. The most recent example of rowdy fans in an NBA playoff series destroying the psyche of a superstar is in Detroit with Tim Duncan. Remember the game where Pop had to pull him and give Duncan a leg massage on the bench? We’ll see how Dirk responds to a crowd that doesn’t support him. I did not hear the Dallas fans chanting “M-V-P!” when Dirk went to the free throw line last night. Maybe I missed it, but that is a tradition you expect from the playoffs. Did I miss that? If so, blame Grey Goose.

In the early game, the Nets much like the Warriors, fell behind early with a chance to close out a series, made a shocking comeback, but could not seal the deal. The final possession came down to Vince attacking the hoop and then finding a wide open and ice cold Boki for the series winning three. It is smart to find the open man, and the proper basketball play. That is a shot that Nachbar can knock down with ease, and he would have become a New Jersey Nets folk hero if he made it.

Vince, you are a superstar. You are a marked man in Toronto. The refs will give you that foul call and the game can go to overtime. At the very least, the reaction to the foul call would have been good for some rioting in the streets. If Nachbar was hitting his shot, fine. But he was 0 for 6 from three at that point. Great 30 point game in a hostile environment for Carter, but the imagery is too thick to ignore. For whatever reason, he didn’t want the responsibility of those free throws. Once again, the fragile psyche of the elite athlete. Or it could be over-analysis and Vince simply thinks “Hey, there’s an open teammate. I’m playing the right way.” Vince gave Boki a chance to be the hero, which is a lot to ask of a frigid ice cold shooter at that moment in time.

The Raptors and Mavericks got a call from the governor and have not been executed yet. Jersey and Golden State are both in the drivers seat, but they also both now have pressure on them to do it in front of their home fans. A loss by either one would be catastrophic, at least by NBA basketball standards.

It’s easy to write forever about the playoffs. But the most fun part for me has been sitting back and watching the Dallas-Golden State series. And sitting back is the wrong phrase, cause I am jumping up and down, throwing arms up in the air, yelling out loud, and so forth. It’s been everything that sports is supposed to be. Can’t wait until tomorrow night. The games tonight (DEN-SAN) and (LAL-PHX) should be entertaining, but they just don’t have that same emotional pull as #1 vs. #8.