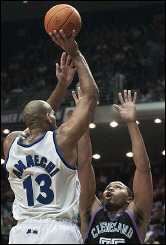 For now, it’s just a rumor, but it has the potential to turn into a rather explosive story. According to the Sports Business Daily (via Sports On My Mind, a great blog, by the way), former NBA player John Amaechi is set to announce his homosexuality in a book slated for release on February 14th. Reportedly, the book is called Man in the Middle.

Amaechi, a Boston native (raised in Stockport, England) currently working as a broadcaster in Britain, was a mediocre NBA center who played sparingly during five forgettable seasons, making stops in Cleveland, Orlando, and Utah. There are rumors circulating that he was a visible presence in Utah’s gay community while he played for the Jazz.

Of course no one will really care about Amaechi coming out; what makes this story so juicy is the possibility that he’ll out some other players. Representatives for the New Jersey Nets could not be reached for comment.