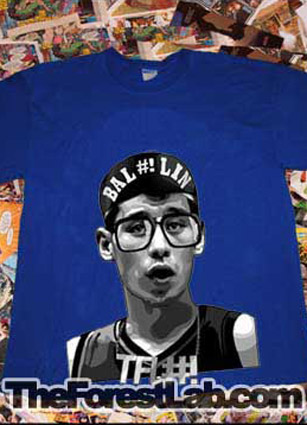 For the past couple of weeks, the entire NBA community has been buzzing about the emergence of Jeremy Lin. Seemingly coming out of nowhere, Lin may have not only saved the New York Knicks’ season but also Mike D’Antoni’s job. He’s been the toast of the blogosphere, the Twitterverse, and everywhere in between.

Everybody with an opinion has weighed in on what has been dubbed “Linsanity.” As long as his strong play continues to back up the hype, the entire lockout-shortened ‘11-12 season will forever be associated with Jeremy Lin. Crazy, right?

Take a look around Madison Square Garden during Knicks home games these days and you’ll see No. 17 t-shirts and jerseys all over the arena. You’ll even notice that some fans have taken their own creative liberties and made their own shirts, signs and slogans in support of the newest star to crash Gotham’s sports scene.

But when super-supreme-Knick-fan-numero-uno Spike Lee gets on your bandwagon, you’ve officially been stamped (at least in New York City) as legit. Not only has Spike been seen in his usual courtside seat rocking Lin’s Knicks jersey, he’s also worn his Harvard collegiate jersey and his Palo Alto high school jersey as well.

But during All-Star Saturday night this past weekend, in a move that cemented Lin’s ascension to stardom, “Spizike” rocked one of the latest t-shirt mashups from the folks at The Forest Lab, who have a steadily growing reputation for putting out some of the nicest apparel in the game. The shirt is pure dopeness and pays homage to both Jeremy Lin and Spike Lee by taking it back to the days of Mars Blackmon.

And the best part is they want to show love to SLAMonline readers and bless you guys with a tee so your friends can ask, “Yo, where’d you cop that from?”

All you have to do to get one is come up with a creative slogan using “Lin” (Linsanity, Linsane, etc.) and leave it in the comment section below—nothing offensive, please. We’ll pick five winners and they’ll receive the exclusive “BAL-LIN” shirt from The Forest Lab.