Kevin Garnett: about to be a Celtic? 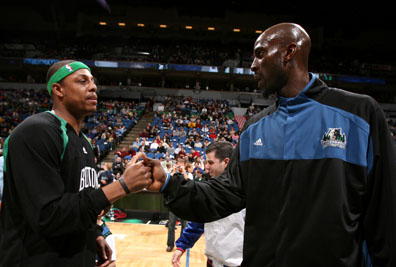 -Oh boy, here we go again: The KG-to-Beantown rumors are surfacing again. They started on RealGM and CelticsBlog last night, and now ESPN’s Marc Stein (among others) has also picked up the scent:

Former teammates Kevin McHale and Danny Ainge have revived discussions of a deal that would end Garnett’s 12-season association with Minnesota by sending him to Ainge’s Celtics, with the Wolves getting back two of the assets McHale coveted most last month: Al Jefferson and Theo Ratliff’s expiring contract.

The deal depends on Garnett backing off his well-chronicled unwillingness to play in Boston. Yet sources indicated late Sunday that Garnett was warming to the idea, raising hopes on both sides that the deal will finally go through.

(If you’re Boston, and you can land Kevin Garnett by only giving up the talented Al Jefferson and Theo Ratliff’s rotting corpse, is there any way you don’t pull the trigger on this deal? Of course, we’re dealing with Danny Ainge here, so you never know…)

-Speaking of Boston: Goodbye, Allan Ray. With Jesus Shuttlesworth now part of the team, your name became a little too confusing. We hope you understand.

-Shaun Livingston almost had a part of his leg amputated following that horrific knee injury he suffered back in February.

Inside the hospital, his knee was scanned for nerve and artery damage. He and [longtime friend Art Jones] still can’t shake the memory of what the doctors said: Part of his left leg might have to be amputated. He tried to fathom it.

Minutes before he’d been playing an NBA game. Now he had to think about having part of his leg cut off. “It was pretty devastating,” Livingston said.

-Should the NBA get rid of fouling out? I don’t think Shaq would be too happy about this.