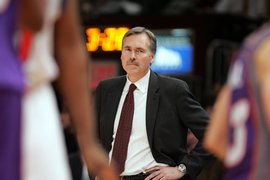 If the money is right, that could certainly be the case.

Here’s the rumor, fresh from ESPN:

NBA coaching sources told ESPN.com on Wednesday that the Knicks continue to regard D’Antoni as their No. 1 target to replace Isiah Thomas and are preparing a “staggering” financial offer they hope will prove too steep for Chicago to compete with, thus convincing D’Antoni to spurn the Bulls.

Money has obviously never been an issue in Gotham, so this shouldn’t really come as a surprise to anyone. New York is without a coach at the moment, and Mike D’Antoni is the biggest (and best) name out there. It makes perfect sense that they try and get their hands on him.

And D’Antoni’s people don’t seem opposed to the idea. Whether he can right that long-ago sunken ship, though, is anyone’s guess.

It’ll be interesting to see if Chicago steps up to the plate, and turns this into some kind of bidding war for the Suns coach.