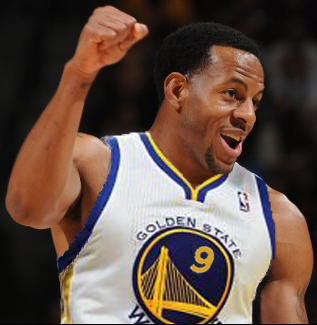 The Warriors made this trade because: they are looking to build on last year’s Cinderella playoff run.

Prior to last season, the Warriors had been to the Playoffs once (2007) since 1994 even though they are the proud owners of one of the best fan bases in the entire League. With second-year head coach Mark Jackson turning this squad filled with youth into a “Mark Jackson” team, Golden State not only made it to the postseason as the sixth seed but found themselves two games away from the Western Conference finals. They became the hot-shooting underdog team bandwagon fans loved to root for.

By being so aggressive to bring in a team-changing player like Iguodala for a roster that has most of its pieces already in place, this front office clearly wants to no longer be labeled as “Cinderella.” They want to win now. It’s been suggested that bringing in Iguodala was intended to be incentive for Dwight Howard to also come to town. Whether or not this was truly their motivation, the Warriors decided to forfeit four of their future draft picks in the process of ridding themselves of bad contracts just so they could sign a single player. They also chose to let two essential bench players go in Carl Landry and Jarrett Jack since they couldn’t afford both of them and Iguodala. But the Warriors want to take a giant step forward, and this new wingman increases their chances of climbing the incessantly improving West playoff ladder and into championship contention.

The Jazz made this trade because: they decided to take advantage of the Warriors’ desperate cry for more cap space.

Once the Warriors and Iguodala began discussing a possible signing, Golden State knew space had to be created, and with veterans Jefferson and Biedrins making $20 million next year and falling out of the team’s rotation, these two quickly became trade bait. Since both of these players’ contracts expire after the ’13-14 season, the Warriors needed to find a team willing to take a short-lived financial hit that would consequently open up the bank for next summer.

So, even though none of this was a part of Utah’s summer plans to begin rebuilding, it certainly went hand-in-hand with the process. They offered to assist the Warriors in their dumping of contracts and took back a multitude of picks in the process.

The Jazz didn’t re-sign 29-year-old Foye and chose to ship him off to Denver instead because his age didn’t correlate with Utah’s stripping down of its older parts. The former Villanova Wildcat is limited as a basketball player with an ability to shoot from deep and not much else, so it seemed unlikely that he’d be able to mature along with the rest of the Jazz squad.

The Nuggets made this trade because: they might as well get something out of Iguodala’s departure.

Iguodala made it apparent that he wanted to see what the free-agent market had to offer once he opted out of his contract. When he followed this up by being a few steps away from a contract with the Kings before they rescinded their offer, there was no question that Iguodala wanted his time in Denver to be a one-year experience.

Denver turned Iguodala’s inevitable departure into a sign-and-trade rather than simply more cap space, and they now have some much needed shooting along with a substantial trade exception they can use to their benefit. Last season, Denver was 25th in the League in three-point shooting, making only 34.3 percent of their shots from distance. Foye will help the Nuggets improve in this area of weakness since he made half of his 70 three-point attempts in transition last season, according to Synergy Sports.

During an offseason in which Denver fired long-time head coach George Karl, lost NBA Executive of the Year Masai Ujiri and now no longer has No. 9, it is difficult to figure out what the team’s new identity will be. They’ve lost so much of what they were this past season and this past decade. By only costing them $9 million over the next three seasons, Foye, Utah’s all-time record holder for three-pointers in a season (178), can fit into whatever that identity ends up being.

This is good for Andre Iguodala because: he no longer has to be “the guy.”

During Iguodala’s first two seasons in the League, Allen Iverson was commanding the point and burdening himself with most of the scoring. There was no need for Iguodala to be the main “AI” for Philadelphia. Since the Sixers didn’t need Iguodala to take on the majority of the ball handling and scoring, he was able to have his most efficient two seasons of his career. During this time period, Iguodala shot 50 percent from the field and turned the ball over only 1.8 times per game while still rebounding at a high rate (5.8 per game). This shooting percentage and turnover rate are by far the best of his career.

Once AI was shipped off to Denver, though, Iguodala took on a role that didn’t fit him. His shooting percentages all began to drop while his turnover rate rose. As the main leader on the roster, his Sixers teams never finished higher than sixth and never won more than two games in the first round until Derrick Rose got hurt in the 2012 Playoffs, which helped the eighth-seeded Sixers move onto the second round.

Iguodala now joins forces with a Warriors squad that already has a clear-cut offensive force and ball handler in Curry along with All-Star David Lee and sharpshooter Klay Thompson; he no longer must put pressure on himself to be a do-it-all player. Yes, his ability to do many different things on the court and play three positions will be extremely valuable for Mark Jackson and his different lineups. But Iguodala can now hone in on his strengths.

Of the 135 players who took more than 200 shots inside five feet last season, only LeBron James (75 percent) was more efficient than Iguodala (73.4 percent). Since he also made more field goals (212) from this distance than Curry and Thompson combined (206) and made 69.2 percent of his transition shots last season, Iguodala’s teammates will welcome his slashing and ability to finish around the basket. Also, when Curry needs someone else to bring the ball up the court and Toney Douglas is on the bench, Iguodala, who led all shooting guards in assist percentage last year (5.4), will be ready to help out.

Iguodala’s major flaw is his shot selection from the perimeter and his inability to consistently make these shots. In spot-up situations last year, he made only 33.6 percent of his field goals, according to Synergy Sports. With Curry, the NBA’s all-time leader in three-pointers made in a season (272), shooting from deep and Thompson putting in plenty treys of his own, does it really matter if Iguodala can shoot a three-pointer? Golden State’s newly acquired athlete can focus on his more polished skills and leave the outside shooting to his backcourt teammates.

Other than rookie Harrison Barnes showing flashes of serving in this role, a gritty perimeter defender was nowhere to be found for the Warriors. Iguodala comes in as someone who can lockdown wingmen and can take tougher defensive assignments off the hands of Curry and Thompson. Iguodala has the perfect combination of strength, length and quickness. In isolation play last season, he was the fourth-best defender, allowing only 0.63 points per play. Thompson and Curry weren’t even in the top 40. Just as Tony Allen, Kawhi Leonard, Shane Battier and Paul George/Lance Stephenson showed in the conference championships last year, these perimeter defenders are vital for playoff success. Iguodala can perform this role.

This is bad for David Lee and Harrison Barnes because: one of them must now become a sixth man.

Curry and Thompson should certainly start at the 1 and 2 while Bogut (pending any injuries) will command the 5. Lee, Barnes and Iguodala can’t all be in the starting lineup, even though they each have a reason to be there. Lee is coming off an All-Star season in which he led the League in double-doubles (56), Barnes just finished the postseason playing the best basketball of his young NBA career and Iguodala most likely isn’t earning $12 million a year over four seasons to be a sixth man. It looks like Lee or Barnes will be forced to take a seat, and neither player deserves the demotion.

Lee’s injury in last year’s Playoffs opened up the opportunity for Jackson to go small, and he now might want to stick with that game plan going forward. The lineup of Curry, Jack, Thompson, Barnes and Bogut played the most minutes of any Warriors’ post-season lineup and outscored opponents by 13.6 points per 100 possessions, according to NBA.com’s advanced stats tool. Shifting Thompson to the 2 and implementing Iguodala at the 3 could be the Warriors’ most deadly lineup, both offensively and defensively. And with the injury to Gallinari toward the end of last season, the Nuggets began starting Wilson Chandler at power forward alongside Iguodala, so he already has a good understanding of this role.

Lee might be one of the first players to go from All-Star to sixth man without changing franchises, but if he is willing to play his part for the betterment of the team, the Warriors could have a dynamic rotation from the very start.

The Jazz won this trade because: they can let their young players grow next year, receive a high 2014 pick in the process and have plenty of cap space for a star-studded free agency next summer.

(The Warriors almost won this trade; however, due to other elite teams holding on to their core or getting Dwight Howard, Iguodala moves Golden State up only a few spots in the conference.)

Since Deron Williams was traded to the Nets, the Jazz have stayed afloat in the West but have plateaued right in the middle of the conference. They have finished ninth, eighth and 11th during the past three seasons, never showing signs of climbing to the top or falling to the bottom. General manager Dennis Lindsey decided to take a drastically different approach.

Paul Millsap and Al Jefferson are gone. Once Mo Williams also makes his expected departure from the team, the Jazz will be in all-out rebuild mode. And they will be rebuilding exactly how a franchise should.

Utah’s core consists of young prospects Derrick Favors, Enes Kanter, Gordon Hayward, Trey Burke and Alec Burks. They will now all get the chance to become more than just potential. Consequently, Utah will most likely struggle and end up with a high draft pick in 2014 to go along with the Warriors’ first rounder. With the contracts of Jefferson, Biedrins and Rush all expiring next summer, the Jazz will have the cap space to lure big-time free agents to join a budding core. To add to all of this, they have four other future draft picks coming in from the Warriors or Nuggets.

Starting over in professional sports is a tricky and risky process that can take much longer than desired. By having current youth to develop this upcoming season, plenty of future draft picks and the cap space for a promising 2014 free agency, the Jazz have officially taken a solid step in the direction of rebuilding.