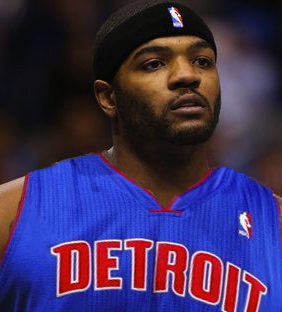 The Pistons made this signing because: their front office is getting impatient.

Ever since Flip Saunders was fired after his squad lost to the Celtics in the 2008 Eastern Conference Finals, the Pistons have been nothing short of disappointing and difficult to watch. Detroit has gone from a perennial force that consistently appeared in the conference finals to a team that hasn’t won more than 30 games in any of the past four seasons.

Owner Tom Gores, who bought the franchise in 2011, has seen enough in his short time at the helm. In an interview with the Detroit Free Press, he said, “I want to see solid progress, but I’m not shying away from the fact that we need to find our way to the Playoffs.” And with General Manager Joe Dumars’ contract expiring after this upcoming season, a sense of urgency suddenly arose in Pistons management.

Bringing in Smith (17.5 ppg, 8.4 rpg, 4.2 apg, 1.8 bpg and 1.2 spg last season) is a clear indication that the Pistons are attempting to take a large stride toward relevancy and the Playoffs that Gores so desires. This is the most expensive contract Dumars has ever given to a free agent and is a bold move for an organization that has failed to bring in a big name since trading for Rasheed Wallace the year they won their title. Whether or not you consider it good for the team, signing J-Smoove is a blockbuster move and a move in the direction of winning games.

This is good for Joe Dumars because: Smith is the first prominent free-agent signing for Detroit in 11 years.

During the 2002 free-agency period, after only being general manager for a few years, Dumars pulled off his first major signing by bringing in Chauncey Billups on a multi-year deal. Since then, though, his only other notable signings via free agency are Tracy McGrady, Antonio McDyess and Chris Webber—three players that were all brought in well past their prime.

Dumars just signed the third most talented free agent behind Chris Paul and Dwight Howard. In order to build a winning team, a general manager must take chances, and it’s difficult not to see the risk involved with this move. It’s noticeably there. But even if this pairing of Smith and the Pistons ends up lacking any substantial success, Dumars should be given his just praise for convincing an upper-tier, flashy free agent to sign with his team and finally bringing a form of excitement to The Motor City.

(In 2004, Dumars took a risk by trading midseason for a fairly unstable Rasheed Wallace. The Pistons went on to win the Championship that year. Could this be a different type of risk turned into a similar fruitful situation?)

This is bad for Joe Dumars because: he has now twice in the past five years signed a free agent who doesn’t fit.

Dumars shelled out $55 million over five years for Ben Gordon in 2009. At the time, Gordon was coming to a Pistons team that already had another former Connecticut star, Richard Hamilton, commanding the shooting guard position in the starting lineup. This move forced head coach John Kuester to start moving his veteran leader from the bench to small forward then back to the bench. Hamilton eventually got to the point where he appeared to have lost interest in playing for Detroit and was labeled as a “distraction” by someone in the organization. This was a pairing set up to fail from the start—these two guards could not coexist on the same team.

Since then, Gordon was shipped off to the Bobcats while Hamilton had his contract bought out. Not a very happy ending for either of them, was it?

With the move to put Smith on the roster, Dumars could be in for yet another unpleasant pairing that puts players of the same position together. Prior to the signing, the Pistons had two frontcourt players in Greg Monroe and Andre Drummond ready to step into bigger roles. Drummond, who was limited to only 20.7 minutes in his rookie season, is a project Detroit can’t wait to see blossom. Expanding his play from last year to 36 minutes, he would have averaged 13.8 ppg, 13.2 rpg and 2.8 bpg. This kid is jam-packed with potential, just waiting for his opportunity. But with pressure to succeed being applied by his boss, Dumars felt the need to bring a big name to town, regardless of how he fits in with the current team. Enter Josh Smith.

Even though head coach Mo Cheeks will look to start his 6-9 forward at the 3, he plays much better at the 4. According to 82games.com, last year Smith had a PER of 16.1 at small forward compared to an 18.5 PER at power forward; it’s his natural, more comfortable position. To get the most out of his newest player, Cheeks is going to have no choice but to give Smith plenty of time at the 4 while putting either Monroe or Drummond on the bench as a consequence. Being the most inexperienced of the three, Drummond might end up getting the raw end of this deal and losing the chance to grow into a more experienced player on a developing roster. Cheeks must find a way to allocate playing time between his big men; otherwise, one of these three will eventually have to go.

Smith is bad for the Pistons because: his strengths are superfluous.

During the past three seasons, the Pistons have had the highest average of points in the paint in the League (57.3). The next closest team is the Spurs and they aren’t even that close (49.3). What this team has been lacking is consistent shooting from outside this area, as Monroe and Drummond combined to make just 30.3 percent of their shots outside the restricted area. They took the first step in trying to improve their capability to spread the floor by drafting Kentavious Caldwell-Pope with their lottery pick. Smith might heighten this problem.

The Pistons got a freak athlete who truly thrives by finishing inside (77.6 percent shooting at the rim last season), and regresses by shooting from the outside. According to Synergy Sports, Smith was one of 13 players last year to have 300 possessions as a spot-up shooter. Eight of these players averaged better than 1.0 points per possession in these situations…Smith ranked dead last by far, at .788 points per possession.

Hoisting up 2.6 three-point attempts per game last year, Smith obviously enjoys settling for a jumper on the perimeter rather than attacking the basket. By joining a team that already has two almost-7-footers in the starting lineup, a forte of scoring inside and a lack of outside shooting, Smith will start at the small forward position. He will most likely be encouraged to fire away by both his coaching staff and opposing defenses, which have never respected his jump shot. When he is not taking away minutes from Monroe or Drummond, instead of taking advantage of his ability to finish in the paint, Smith will inevitably go through stretches where he is forced to rely on his weakness.

On the other end of the court, Smith must wrestle with more of his weaknesses. Usually finding a way to be disruptive as a weakside-help defender, he did most of his damage while defending in the post. According to Synergy Sports, Smith ranked 41st last year in terms of post defense, placing him among the best. When he played spot-up defense, he fell to 133rd in the League. Playing the 3 will require substantially more spot-up defense rather than post defense and reduce his opportunities to block shots from the weak side.

Yes, adding Smith to an already strong frontline should allow Cheeks to construct many different lineups in response to his opponent’s makeup; however, Smith’s limitations on both ends of the court actually restricts Cheeks’ ability to be flexible with his rotations. Otherwise, these Pistons are about to have some heavily clogged lanes.

This is good for the Eastern Conference because: the race for Playoff spots has become even more competitive.

The Heat, Pacers, Bulls, Nets and Knicks have clearly separated themselves from the rest of the East in terms of contending. As we move one season closer to the ever-so-intriguing summer of 2014 made up of one of the strongest drafts since 2003 and a free-agency class inundated with stars, many teams have decided to take a tanking—I mean rebuilding approach. But how many teams in the East are truly doing so?

The Cavaliers and Wizards, who have established stars in Irving and Wall, are expecting their lottery picks to contribute right away. The Celtics have completely torn apart their championship squad but still have a point guard in Rondo who will fight for every win he can get. The Bobcats just brought in Al Jefferson, who is one of the best low-post scorers in the League while the Hawks have Al Horford and Paul Millsap looking to bang with other bigs down low. The Raptors have extended head coach Dwane Casey’s contract and hope he can build upon last season’s strong finish. The Bucks…well, who knows what they are doing or what they will be by season’s start.

With the insertion of Smith, the Pistons can easily be thrown into this mix of playoff contenders. Other than the Magic and 76ers, it shouldn’t be considered a surprise to see any of the other East teams in the postseason.

This signing will have a moderate impact on the Pistons because: this team is now the new Atlanta Hawks.

From the moment the Hawks took Al Horford with the No. 3 pick in the 2007 Draft and added him to the duo of Joe Johnson and Smith, that team was destined for the Playoffs. Yet, they weren’t destined for a Championship. The Hawks have had six straight post-season appearances since that Draft, but only three conference semifinals appearances. During two of those series, they were swept.

This core was stuck in a place no NBA team ever wants to be in: mediocrity. They were trapped right in the middle of their conference without having pieces to legitimately compete for a title or the contracts and assets to rebuild. Now, Atlanta plans to go in a new direction as they have gotten rid of Johnson’s never-ending contract and let Smith go to Detroit.

The Pistons will get to experience this mediocrity. Smith certainly impacts the Pistons in a positive way, allowing Gores’ wish to become a reality—the Playoffs are around the corner for Detroit. Even though he might not fit positionally with his teammates, Smith gives the Pistons just enough to push them forward and out of the pits of the conference. Once they get into their new territory that consists of being bounced in the first round and collecting draft picks in the teens, they will realize where they are: in the dreaded fringes of playoff contention.