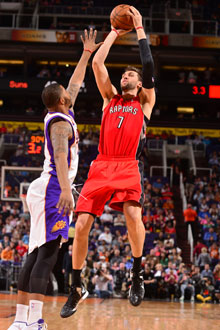 This is the first installment of Court Changes—a summer breakdown of trades and free-agency signings. The series will get into the motivations behind the moves and how these transactions will affect teams’ trajectories. By diving into Court Changes, you will go a little deeper into this offseason. All opinions are those of the writer.

The New York Knicks have traded Steve Novak, Marcus Camby, Quentin Richardson (via sign-and-trade), a 2016 first-round-pick, and a 2014 and 2017 second-round pick to the Toronto Raptors for Andrea Bargnani.

The Raptors made this trade because: this was a long time coming.

When Bryan Colangelo drafted Bargnani with the first overall pick in 2006, he was dreaming of bringing the next Dirk Nowitzki to the League, only more athletic. After some decent seasons and a Playoff appearance, the big man still needed to improve significantly in order to live up to those expectations. Nevertheless, Colangelo gripped tightly to his vision and gave his “stretch 4” a lucrative five-year, $50 million extension up to the summer of 2015. It was apparent that Colangelo had an attachment to Bargnani beyond his production on the court, as if he was desperately hoping he would develop into the player he craved—Dirk 2.0.

But things haven’t panned out for the Italian in Canada. By trading for both Kyle Lowry and Rudy Gay this last season, the Raptors front office began the transition away from Colangelo’s pipedream of stardom for the 7-footer. Whether you want to point to his lack of efficient scoring, inability to rebound or collection of injuries, Bargnani can be considered a legitimate “bust” for the Raptors.

With newly hired general manager and reigning NBA Executive of the Year Masai Ujiri now at the helm, the Raptors made it their mission to do what was necessary and cut the cord on a player producing boos from his own crowd. The idea of amnestying Bargnani was even being tossed around by many. The end was near—we all knew it. Once the Raptors realized they had a suitor in New York, talks began to progress quickly and a deal was agreed upon.

The Knicks made this trade because: they’re afraid of not being the most “win-now” team in New York.

As Ken Berger of CBSSports reported after the trade, one executive of the Knicks said, “Now that the Nets put their wallet down, the Knicks had to keep up.”

The Nets acquired Kevin Garnett and Paul Pierce from the Celtics, and the Knicks just wanted to join in on the luxury tax party! Clearly, the Knicks (and Nets) management has made it evident with their actions that they plan to win a Championship in the next few years. This team is already over the cap limit, so adding Bargnani’s $23 million during the next two years has changed them from being not flexible to being really not flexible until 2015. It’s the approach James Dolan and his staff have decided to take and they’re sticking to it.

At 27, Bargnani has a chance to escape all the pressure that goes along with being the top pick as the franchise player and improve his game. He can come off the bench as a role player on a Championship-aspiring team. He at one time averaged 20 points in a season. He at one time shot better than 40 percent from three-point range in a season. Even though those numbers seem like something of the past, the Knicks believe he has the tools and has shown the ability to truly excel in certain parts of the game. Yes, changing from the city of Toronto to New York might be a bit of a transition for Bargnani. But his new team hopes he can contribute enough to push them past the Heat and into the NBA Finals. Nothing less than that.

This is good for Masai Ujiri because: he just found a way to send a second franchise in the right direction all thanks to the Knicks.

When Ujiri was general manager of the Nuggets, he had a Melo problem on his hands. A big Melo problem. As Melo played out his final season with the Nuggets, he couldn’t have made it clearer he wanted to play in New York under the big city lights. Once summer arrived and free agency began, Anthony would have happily walked out the door, leaving the team that drafted him with nothing but cap space.

But the Knicks couldn’t wait and Ujiri convinced them to make a deal. Instead of signing him during the summer, New York gave away quality role players and plenty of draft picks that allowed Denver to not lose a step in their winning ways. Even though they finished this season with a first-round exit as the No. 3 seed, since Anthony left, they have gone 145-85 (.630) in the regular season. They still need a few parts to truly become a contender, but they have a core group of players ready to compete in the West.

Now he’s done it again. Bargnani, a player with one of the most untradeable contracts in the League, is off the Raptors’payroll for good. Furthermore, Ujiri obtained compensation in the form of three draft picks—an ideal foundation builder as Toronto can package these in trades or simply use them. They have options. They have potential. And you have to give one of the fastest rising front office workers credit for pulling this off.

This is bad for the Knicks because: they obtained a piece that doesn’t fit.

(I understand Bargnani still has a chance to develop and improve in New York, but let’s talk in terms of the player he has been up to this point in his seven-year career.)

When the Knicks lost to the Pacers in the Playoffs this past season, what derailed them? Well, other than JR Smith’s sudden inability to put the basketball in the hoop, the team couldn’t grab rebounds. Indiana out-rebounded New York 272-220 during the six-game series, snatching almost 10 more boards per game. This was comparable to their struggles during the regular season since the team was tied for 27th in rebounds per game.

So, already having a power forward in Amar’e Stoudemire who doesn’t rebound very well, the Knicks would be smart to bring a bruiser to the roster, right?

Wrong. According to Basketball Reference’s database, only three 7-footers who have played at least 1,000 career minutes have rebounded at a worst rate than Bargnani. With his size, he should be crashing the boards, but he seems to lack any desire to go get the ball when a shot goes up.

So, he at least shoots the ball well and can be an offensive force, right?

Wrong. Bargnani ranked 259th out 344 eligible players in player efficiency rating (PER) last season. Once a sharpshooter who could stretch out the defense, he hasn’t shot above 40 percent from deep since the ’08-09 season. In their last 200 attempts, Josh Smith shot better from three-point range than Bargnani. Think about that for a second. I don’t know if he’ll ever get his shot back, which is exactly what the Knicks are counting on.

Oh yeah—he’ll also be coming off the bench to replace Stoudemire, who has all the same problems. Injury-ridden. Can’t rebound. Can’t play defense. Needs the ball in his hands. Inflated contract.

With Bargnani’s insertion into the rotation, the team will need Melo to play small forward for the most part since Bargnani, Stoudemire and Chandler will be rotating between the 4 and 5 positions. Melo’s offense and defense seemed to be at its best last year when he played as the 4 with one center and three shooters. He could guard the opponent’s big man in the post while avoiding isolations on the perimeter and could attack a stretched-out defense due to all the gunners on the floor. Even though New York didn’t give up any meaningful players from their rotation, Bargnani doesn’t seem to mix well with the current roster or allow Melo to play at his most effective position. He just doesn’t fit—other than the fact that he’s the fourth player on the team making more than $10 million per season…I guess money can’t buy you everything.

The Knicks lost this trade because: they lost future flexibility yet again.

For some reason, the New York Knicks do not believe in draft picks. It must go against their basketball ideology. Iman Shumpert is the only player on the roster drafted by the Knicks. They have now gotten rid of first-round picks in 2014 and 2016 along with second-round picks in 2013, 2014, 2015 and 2016. And potentially 2017 and 2018 as well. They shouldn’t be using money and giving away draft picks to match the spendthrift ways of their intrastate rival. That’s not smart management, but Dolan has a “YOLO” approach. (Yes, I did just use “YOLO” as an adjective.)

This franchise has a fascination with valuing overpaid players more than draft picks, setting the roster in stone and putting the team in a position without any flexibility. If any of these players end up bombing, New York is stuck with them for the long haul.

But this happens. When teams overpay or players underperform, all contracts have to eventually come to an end and then a rebuilding process is always an option. But if Melo and Stoudemire don’t return to the Knicks once their contracts are up in the momentous summer of 2014, the team will have a difficult time rebuilding with minimal movable pieces and a lack of picks. They may be in “win-now” mode like the Nets, which will make for some entertaining nationally televised rivalry matchups, but what will become of the Knicks once the Melo era has passed? Whatever the answer may be, drafting players won’t be a part of the solution.

The Raptors’ future looks much brighter. Due to the hiring of a general manager who doesn’t have irrational connections to any players and who made a solid first step toward a foundation and direction for the franchise, the Raptors have a future to look forward to. A Bargs-less future.