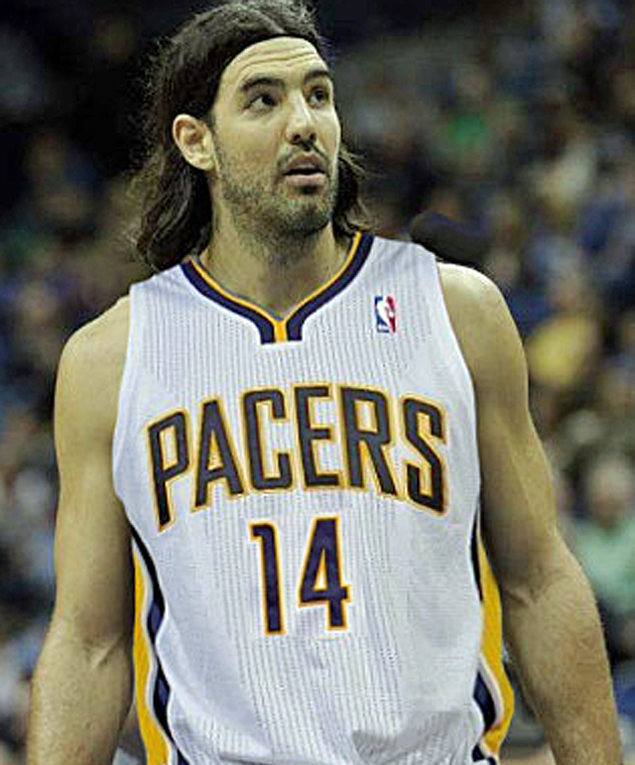 The Phoenix Suns have traded Luis Scola to the Indiana Pacers for Gerald Green, Miles Plumlee and a 2014 lottery-protected 1st round pick.

The Pacers made this trade because: they need more offense and production from their bench.

Indiana was a few steps away from dethroning the King. That team pushed the Heat to seven games and certainly showed the League that the super squad from South Beach has faults. Being a two-time champion doesn’t mean you’re the perfect team.

Pacers management knew they didn’t have the perfect team, either, and recognized that their bench was the largest reason they couldn’t make their first Finals appearance since 2000. The Pacers’ bench lacked any sort of scoring punch or pace-changing sparkplug, leading to the second-worst scoring bench in the League this past regular season and postseason. Their bench also shot a League-worst 39.3 percent from the field during the regular season. The five starters had full-season on-off ratings between +8.8 and +12.4 per 100 possessions compared to the next five players—players No. 6 through No. 10 in minutes played—who averaged from -6.6 to -14.8, according to Basketball Reference. Something needed to change.

The 33-year-old Argentinean is a part of this change. Scola has career averages of 14.2 ppg and 7.5 rpg on 50.4 percent shooting during six years in the League. Last season, most of Scola’s numbers dropped, but his decrease in minutes and points must be viewed in context with what was going on in Phoenix. Once Lindsey Hunter replaced Alvin Gentry as head coach mid-season, rotations became erratic, and all players struggled to find consistent minutes on a path to the worst record in the West.

Scola can still produce at a high level for the Pacers and could be a starter for at least a dozen NBA teams. The 6-9, 245 lb. power forward is a crafty, low-post presence that will bring his creative, well-rounded game to the court every night. Even though he is a short-term solution for the Pacers’ depth issues, this blue-collar international player provides durability for a blue-collar team. For his career, Scola has played in 468 of 476 possible regular season games and played in 148 of 148 possible games the past two seasons. And his endurance also extends to how he finishes. During the final six games last year, Scola averaged 18.8 ppg and 11.3 rpg, playing some of his best basketball in a Suns uniform. For a player that’s never been deep into the postseason, Scola could prove to be the sixth man the Pacers need in later Playoff rounds.

Once team president Larry Bird came back this summer from his one-year hiatus, he made it clear that strengthening his roster’s bench would be an offseason priority. With the signing of Scola, along with other insertions (CJ Watson, Chris Copeland, a healthy Danny Granger), Bird has effectively and efficiently completed his goal.

The Suns made this trade because: they are in all-out rebuild mode.

This one is pretty easy to figure out, especially with new head coach Jeff Hornacek and general manager Ryan McDonough looking to change the direction of their franchise. Scola was never a piece for the Suns’ present or future; he was more of a luxury claimed after the Rockets amnestied him. With McDonough being one of the many new-age, statistics-driven owners in the League, it was only a matter of time before he shipped off Scola (and possibly Dragic and Gortat) for budding players and draft picks.

By dealing him to the Pacers, the Suns have stuck to their long-term plan and brought in a super athletic Green and Plumlee, who raised many eyebrows during his impressive play at the Orlando Summer League. Additionally, the Suns now have their third pick in a very deep and well-regarded 2014 NBA Draft. As Suns president of basketball operations Lon Babby puts it, “The plan is clear. The direction is clear.”

This is good for the Pacers because: they just improved the best frontcourt in the League.

Currently, the best way to gauge how someone performs is to look at how he matched up against the Heat. The Heat are clearly the best team in the League, and if any East team wants to win a championship, it’s inevitable they’ll need to go through Miami.

David West and Roy Hibbert dominated the Heat last year with their interior presence, combining to average 38.7 ppg and 19.3 rpg and commanding every aspect of the paint on both ends of the floor. However, due to a lack of bench play, these two were forced to play 39.2 mpg against the Heat. By the time the series was pushed to a decisive Game 7, this pair didn’t have much left in the tank and had their worst game of the series. Because of their bruising style of play, West and Hibbert couldn’t put in this many minutes against a relentless Heat team and finish them off.

Scola will now replace Hansbrough and be an improvement in almost every aspect of the game. Rather than just finding loose balls and tipping in shots that bounce in a favorable direction, Scola can do so much more offensively than Hansbrough can, scoring in volume and with efficiency. He also is a more versatile power forward, through his scoring and his passing, and is practically an extension of West. Both big men can score inside-out, grab defensive boards and keep defenses honest with their backs to the basket. After ranking 22nd in the League in three-point shooting last season (34.7 percent), with Scola implemented into the rotation, the Pacers should be able to improve that statistic with better spacing for their shooters. The League’s best frontcourt now has superior depth.

This is bad for the Pacers because: they might have diminished their gains in offense by bringing in defensive liabilities.

Indiana identified themselves by their elite defense and used that to get to the doorsteps of the Finals. Even though this type of defense does in fact win championships, there is another side to the court that needs to be strong. For the Pacers, there were times last season when their offense made them look pitiful, to say the least.

So by bringing in Scola, along with Copeland and Watson, the team now has some instant offense off the bench. But they might also have some instant defensive problems. Indiana attempted to fix something that was only slightly broken by bringing in Scola and Copeland, but along with their offensive strengths comes defensive ineptitude. They both rotate slowly and lack any sort of interior presence.

Again—the Pacers were right there. They don’t need radical adjustments to take the next step. This new, offensive-minded bench could be too much of a change and could hurt the team’s overall defense. Bird must have strong faith in Vogel and believe that his team philosophy and scheme can cover up any potential defensive problems stemming from new bench players.

This is bad for the NBA New York front offices because: the Pacers are showing them the frugal way to go about building a “win-now” roster.

Indiana is changing the definition of what it means to “win-now” by continuing to make moves for the present without sacrificing their vision for the future. While the Knicks are overpaying Bargnani, Chandler and Stoudemire, and the Nets are projected to pay almost $90 million solely in luxury taxes, the Pacers have made moves for the present without going over the NBA’s luxury tax threshold or losing too many of their future picks. They are proving that a team doesn’t have to be shortsighted to go “all-in.”

By trading for Scola, Indiana has actually reduced next year’s payroll by $0.1 million, leaving them about $2.7 million for another player. Instead of just recklessly and carelessly spending money, Bird found a cost-efficient move that still successfully fills a requirement for his roster. The Knicks and Nets might finish with a better record than the Pacers and/or go deeper into the postseason, making their lavish spending worth it; however, no matter how this next season turns out, Indiana won’t be paying any significant taxes and will still have pieces in place to win in the future. Hats off to Larry Bird.

This is good for Suns fans because: even if their team isn’t winning many games next year, they’ll get to watch some high-flying basketball.

As mentioned before, the Suns are clearly in rebuilding mode and are dedicated to developing their youth. So, consequently, this post-Steve Nash era continues to be a process as the team will be a bottom feeder for the near future.

However, McDonough has given his fanbase a roster that will be fun to watch—one filled with highlight-reel dunkers and athletes. Eric Bledsoe, Shannon Brown, Archie Goodwin, Green and Plumlee will all receive significant minutes and can get up and finish above the rim with authority, making fans get out of their seats. So even though wins will be far and few between, the Suns might become an unexpected League Pass favorite.

The Pacers won this trade because: this might be the “bit more” they need to get past the Heat.

Last year’s NBA Playoffs showed the nation that sometimes one player or one play can be the difference between a team hoisting a trophy and a team thinking about what could have been.

In Game 6 of the NBA Finals, if Chris Bosh had not gotten an offensive rebound, Ray Allen couldn’t have shot a three-pointer. If Allen had not made his three-pointer, the Heat would currently be one-time champions. Signing Allen last offseason obviously didn’t make as much noise as bringing in LeBron and Bosh did. But Allen turned out to be just as crucial to their success as the other two. When the competition becomes as equally matched as the Heat’s finally two series were, every little bit makes a huge difference.

Scola isn’t a franchise-defining move or a player that will define this offseason of transactions. What he could be is the Pacers’ Ray Allen. No longer will Vogel have to begrudgingly take one of his two big men off the court since Scola will be ready to play and contribute at a high level.

Indiana took Miami to the brink of the end of their season in a Game 7…and has now gotten better while the Heat have stood pat. Wade and Allen will be one year older, and that team must hope that those two can fight off father-time for another full 82-game season.

The Pacers have brought in a well-respected teammate and locker room presence. Scola is the final, significant piece that changes the Pacers from a team that hopelessly relies on their starting lineup to one that can go deep into their bench. They have gone from building a young core to adding veterans to an almost-finished project. Gone are the days of exceeding expectations; the Pacers are built to win a championship next season. If Scola buys into Vogel’s system, particularly defensively, and the other new pieces settle into their respective roles, there is no reason to doubt the Pacers’ capability to dethrone the King. Now and later.

To the Pacers fans, thank you guys for welcome me, I really wish I can help the team get farder. I won’t stop working until I do. #Pacers