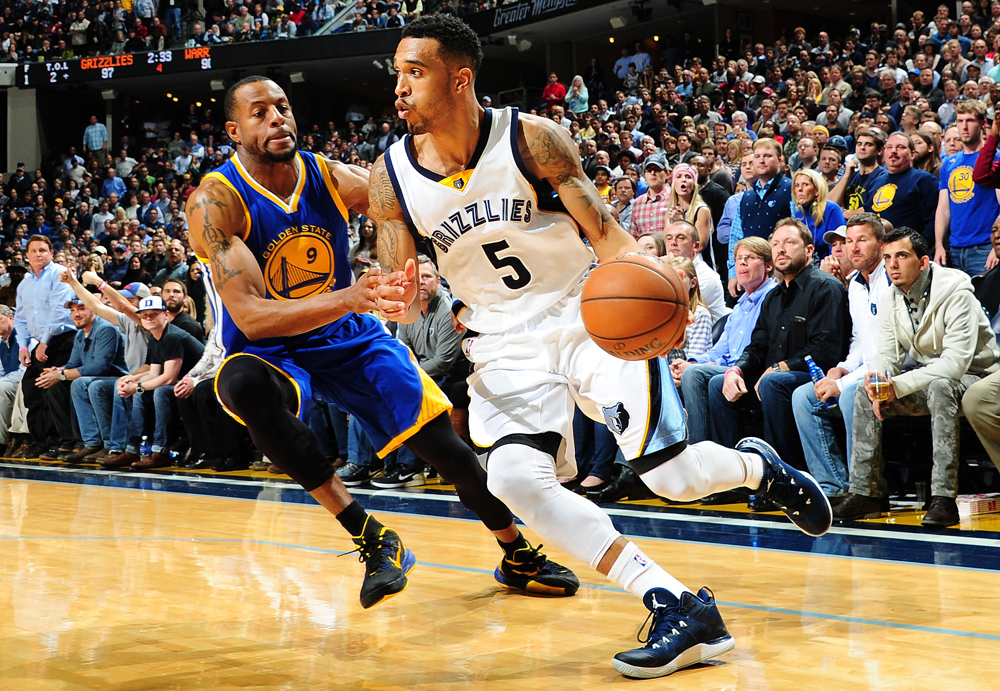 Courtney Lee was acquired by the Memphis Grizzlies as part of a three-team trade with the Boston Celtics and Oklahoma City Thunder on January 7, 2014. He started 47 games for the Grizzlies upon arrival, averaging 11 ppg on 48 percent shooting. This season, he’s starting again alongside Zach Randolph, Marc Gasol and Mike Conley, while helping push Memphis out to a 21-6 record—good for third-best in the highly-competitive Western Conference.

While averaging 12 ppg on 51.5 percent shooting overall, Lee’s made his biggest impact for Coach Dave Joerger’s squad by forcing defenses to extend and defend the three-point line on a nightly basis. His 54.5 percent mark from long-range is currently the best in the NBA, slotting him roughly five percentage points ahead of the seemingly automatic Kyle Korver. Lee also has a game-winning basket at the buzzer to the beat the Sacramento Kings 111-110 under his belt, along with a critical overtime three in an epic battle with the San Antonio Spurs this season.

We caught up with Lee to talk about all that and more when he came through Cleveland for a matchup with King James and company over the weekend. Check it out:

SLAM: Everyone around the League was watching your 3OT game with the Spurs last week. What did you learn about your guys, battling the defending champs like that for 15 extra minutes?

Courtney Lee: That game was one the craziest games I’ve been a part of. Like you said, it went to three overtimes, both teams not backing down. It showed a lot of character within our team to continue to compete, even when things weren’t going right. We’re trying to get to where the defending champs are, and that was a huge test for us. If you watched that whole game, at end of the third OT, you could see both teams meet at half-court and just congratulate each other because it was such a well-fought game.

SLAM: You’re leading the League in three-point field-goal percentage right now, connecting on a career-high 54.5 percent of your attempts from long-range. What do you attribute that effectiveness to?

Lee: I definitely put a lot of work in with our team’s shooting coach during the offseason. He gave me different workouts during the summer, and that helped me with my muscle memory. Then it’s really all about reps. In our system, we’re doing a good job of moving the ball as a team, creating good spacing, getting each other open shots. Once you get open, you have that confidence to knock it down because you know you put the work in during the offseason. So I’m just in a good rhythm right now.

SLAM: Can you talk about that Grizzlies system under Coach Joerger? You have the fourth-best record in the NBA, suffered only your sixth loss of the season to the Cavaliers on Sunday. What is coach asking of you guys on a nightly basis?

Lee: The system is pretty much a traditional system. You have two traditional bigs who can post up down low in Gasol and Randolph, and we just play inside-out. We do a good job of moving the ball, spacing and playing off them. So that opens up a lot of things. And coach is just the enforcer, making sure that we’re out there creating the correct spacing and executing. He’s really been great for us.

SLAM: Is it too early to think about how far this team can eventually go this year? What is the tone of the locker room as far as that is concerned?

Lee: Yeah, it is still early. We have six losses, and the wins are great, but we need to figure out how and why we got those six losses. We need to make those adjustments consistently, and that’s where our focus is right now in the locker room. We’re still growing as a team, and still trying to figuring it all out.

SLAM: You’ve played for a few different teams throughout your career (Magic, Nets, Rockets, Celtics) but now you’re a starter on a contending team in the Western Conference. Do you feel at home with this role in Memphis?

Lee: Yeah, I do. I think that the system really complements my game and my game complements the system. And then playing off the guys on this team, I really feel like it is a home for me in Memphis for sure.

SLAM: As a player, do you see the Western Conference as being more competitive than ever before in your career?

Lee: That’s one thing I felt when I first got to the team last year, coming over from Boston. I was like, ‘Is every game like this? This is like playoff basketball.’ And it’s been even better and more competitive this year. It’s a close race all around right now. Every game is just super intense. Like that 3OT game we were talking about, then Portland has another 3OT game with the Spurs after that. So yeah, the West has been crazy.

SLAM: The video of you guys all helping out the Memphis Grizzlies intern whose car was stolen went viral and it was a really nice thing to do. How did that come about, why did you guys want to all chip in and buy him a new car?

Lee: Brandon is just a good guy. He helps us out a lot. As far as anything we need done off the court, he’s always there to do it. And his car got stolen not too long ago, so he was walking around still doing everything that everybody was asking him to do. We just wanted to try to help him, give back as much as possible, and make this Christmas special for him because he really is a good guy.

SLAM: You’ve done some correspondent work on the music scene in the past. You’ve interviewed The Game, covered The Weekend’s concert. Who are some of the younger, newer artists you’re listening to right now?

Lee: Right now I’m listening to the new J. Cole CD. I’m more of a lyrical guy, as far as music, more of a fan of story-telling, like a Kendrick Lamar or J. Cole. I’m also listening to Lupe Fiasco, Stalley, and then a lot of the older guys too.

SLAM: I read that in high school, you were into sketch art. Have you done anything like that in a while?

Lee: I haven’t in a while, but I am capable of being artistic. The last time I was really serious about it was in high school, like you said. I had a couple of my pieces that went to the local museum. I drew one of my classmate, and the other was a drawing of like this garden scene.

SLAM: You were in Cleveland on Sunday to matchup with LeBron James, Kevin Love and Kyrie Irving. What is your first impression of that group, after playing the Cavaliers for the first time?

Lee: They have a great personnel there, obviously, with three All-Stars on one team. They didn’t come out to the fast start that they were hoping for this year, but they’re definitely starting to figure it out. Anytime you play against those guys, you know it will be a good battle.