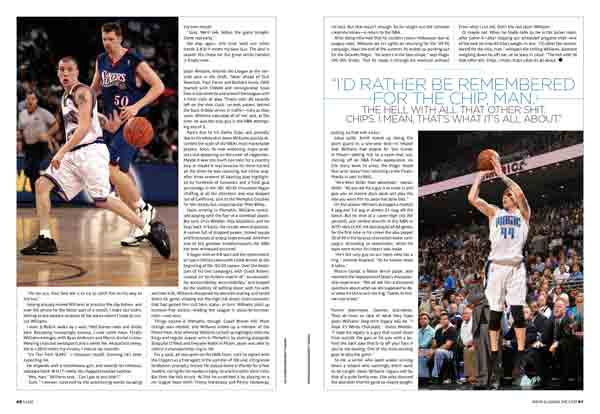 Former teammates. Current teammates. Coaches. They all have a favorite memory of Jason Williams.

Chris Webber, Jason’s All-Star running mate while playing in Sacramento, often sports a smirk across his face. When recalling his most cherished Williams play, though, the grin grows to prodigious proportions. “I remember that crossover on Gary Payton,” laughs Webber, now a broadcaster on TNT and NBA TV. “That was one of the illest crossovers I’ve ever seen. And then Gary tried to trip him [as he went by]…”

In one of the most memorable crosses ever, Williams, a rookie, went between his legs and followed it with a swift switching of the ball from left to right near the three-point line, losing Gary “The Glove” Payton, arguably the best defensive guard in the League at the time, before finishing high off the glass over a 6-9 Detlef Schrempf.

Dwight Howard was 12 years old when Williams, his current teammate, was selected seventh overall in the ’98 Draft, and just 13 when Jason shook Payton. So it’s curious that the reigning Defensive Player of the Year’s first memory of JWill is from the point guard’s adolescent years in Belle, West Virginia. “He played with Randy Moss [in high school],” recalls Howard, closing his eyes as if to better picture it. “They used to always show that highlight of them both playing together. Jason was exciting back then.”

Webber played with a 23-year-old Williams. Howard plays with the 34-year-old version. Hubie Brown coached him in between, when Williams was in his late 20s. Over the course of their time together with the Grizzlies, Brown came to understand his point guard in a way few others did. Where most saw “White Chocolate,” a dazzling dribbler and passer, the coach saw a cerebral player who simply loved the game.

“[The first thing that comes to mind] is this guy’s very high basketball IQ, which he does not get credit for,” says Brown, currently an analyst for ESPN and ABC. “Number two: He loves to play the game. He comes early. He works with the young guys. He just loves playing.”

Webber revels in his time spent with the alley-oop throwing, criss-crossing, three-jacking Williams. Howard prefers to focus on the Williams who leads by the gleam of his championship ring won with the Miami Heat in ’06. Brown wants to ensure people know just how smart a player Jason is. Between these three perspectives, you gain a real feel for who Jason Williams is. A real feel, but not a complete one.

It’s 12:30 p.m. in Atlanta, and the din of bouncing balls and squeaking shoes out on the court in Philips Arena is lessening. Orlando’s shootaround is a Stan Van Gundy huddle away from ending. Game 4 of the Eastern Conference Semifinals is hours away, and the Magic are preparing to put the finishing touches on a four-game sweep of the hometown Hawks.

“He ran out. Your best bet is to try to catch him on his way to the bus.”

Having already missed Williams at practice the day before, and over the phone for the better part of a month, I make like Usain, bolting to the darkest recesses of the arena where I hope to corner Williams.

I wait. JJ Redick walks by. I wait. Matt Barnes nods and strolls past. Becoming increasingly anxious, I wait some more. Finally Williams emerges, with Ryan Anderson and Marcin Gortat in tow. Wearing charcoal sweatpants and a white No. 44 practice jersey, the 6-1 JWill enters my vicinity, I extend my recorder.

“It’s Tzvi from SLAM,” I introduce myself, knowing he’s been expecting me.

He responds with a mischievous grin, and extends his infamous tattooed hand. W.H.I.T. meets my chapped knuckles head on.

“Sure,” I answer, surprised by the acquiescing words escaping my own mouth.

We dap again, this time with our other hands. E.B.O.Y meets my bare skin. The deal is sealed. My chase for the great white (whale) is finally over.

Jason Williams entered the League as the seventh pick in the Draft. Taken ahead of Dirk Nowitzki, Paul Pierce and Rashard Lewis, JWill teamed with CWebb and reinvigorated hoop fans in Sacramento and around the League with a fresh style of play. Threes with 20 seconds left on the shot clock, no-look passes, behind the back dribble-drives in traffic—risky as they were, Williams executed all of ’em, and, at the time, he was the only guy in the NBA attempting any of it.

Partly due to his flashy style, and partially due to his white skin, Jason Williams quickly ascended the scale of the NBA’s most marketable players. Soon, he was endorsing major products and appearing on the cover of magazines. Maybe it was too much too soon for a country boy, or maybe it was because he never earned all the shine he was receiving, but either way, after three seasons of dazzling play highlighted by hundreds of turnovers and a field goal percentage in the 30s, White Chocolate began chaffing at all the attention, and was shipped out of California, sent to the Memphis Grizzlies for the steady but unspectacular Mike Bibby.

Upon arriving in Memphis, Williams continued playing with the flair of a streetball player. But sans Chris Webber, Peja Stojakovic and his boys back in Sacto, the results were disastrous. A season full of dropped passes, missed layups and thousands of empty seats ensued. And then one of the greatest transformations the NBA has ever witnessed occurred.

It began with an 0-8 start and the replacement of coach Sidney Lowe with Hubie Brown at the beginning of the ’02-03 season. Over the better part of his two campaigns with Coach Brown, coaxed on by Hubie’s maxim of “accountability, accountability, accountability,” and buoyed by the stability of settling down with his wife and two kids, Williams sharpened his decision-making and toned down his game, phasing out the high-risk dishes and crossovers that had gained him cult hero status. In turn, Williams piled up turnover-free assists—leading the League in assist-to-turnover ratio—and wins.

Things soured in Memphis, though. Coach Brown left. More change was needed, and Williams ended up a member of the
Miami Heat. And whereas Williams racked up highlights with the Kings and regular season wins in Memphis, by starting alongside Shaquille O’Neal and Dwyane Wade in Miami, Jason was able to collect a championship ring in ’06.

For a spell, all was quiet on the JWill front, until he signed with the Clippers as a free agent in the summer of ’08, and, citing knee tendonitis, promptly retired. He stayed home in Florida for a few months, caring for his newborn baby, he and his wife’s third child. But then the Itch struck. At first he scratched it by playing on a rec league team (with Timmy Hardaway and Penny Hardaway, no less). But that wasn’t enough. So he sought out the ultimate calamine lotion—a return to the NBA.

After being informed that he couldn’t return midseason due to League rules, Williams set his sights on returning for the ’09-10 campaign. Near the end of the summer, he ended up working out for the Orlando Magic. “He wasn’t in the best shape,” says Magic GM Otis Smith, “but he made it through his workout without puking, so that was a plus.”

Jokes aside, Smith ended up inking the point guard to a one-year deal—it helped that Williams had played for Van Gundy in Miami—adding him to a team that was coming off an NBA Finals appearance. As this story went to press, the Magic stood four wins away from returning to the Finals, thanks in part to JWill.

“He’s been better than advertised,” swears Smith. “All you ask for a guy is to come in and give you an honest day’s work and play the role you want him to. Jason has done that.”

On the season, Williams averaged a modest 6 ppg and 3.6 apg in almost 21 mpg off the bench. But he shot at a career-high clip (44 percent), and ranked seventh in the NBA in A/TO ratio (3.43). He also played all 82 games for the first time in his career (he also played 50 of 50 in his lockout-shortened rookie campaign). According to teammates, while his stats were minor, his impact was major.

“He’s the only guy on our team who has a ring,” reminds Howard. “So he knows what it takes.”

Marcin Gortat, a fellow bench player, also mentions the importance of Jason’s championship experience. “We all ask him a thousand questions about what we are supposed to do, or what it’s like to win the ring. Thanks to him, we now know.”

Former teammates. Coaches. Journalists. They all have an idea of what they hope Jason Williams’ long-term legacy will be. “I hope it’s White Chocolate,” insists Webber. “I hope his legacy is a guy that could shoot from outside the gym or hit you with a behind the back pass that’ll rip off your face if you’re not looking. One of the most exciting guys to play the game.”

To me, a writer who spent weeks running down a subject who seemingly didn’t want to be caught, Jason Williams’ legacy will be that of a quiet family man. One who shunned the attention that his game so clearly sought. From what I can tell, that’s the real Jason Williams.

Or maybe not. When he finally talks to me in the locker room, after Game 4—after skipping our scheduled pregame chat—one of the best no-time All-Stars weighs in, too. “I’d rather [be remembered] for the chip, man,” whispers the smiling Williams, diamond weighing down his left ear, as he leans in close. “The hell with all that other shit. Chips. I mean, that’s what it’s all about.”