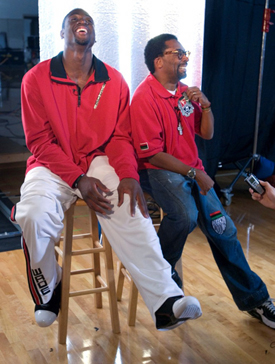 Fresh off of Spike Lee’s appearance on Monday Night Football from New Orleans comes the news that he’s working on a Dwyane Wade commercial. Of course no story involving basketball, Spike, and Dwyane can be told without going on a tangent about how he’s the next, you know. But I will look past that and move on.

So far the most recognizeable Wade commercial is the “Get knocked down seven, get up eight”, which we dissected in great detail in The Links during this past season. I have also enjoyed his Chevy commercial where he puts up a basketball hoop for some kids, gives the car to the coach, and then bikes away uphill on a bike that is way too small for him. Someone needs to organize a bike race between him and Zach Randolph, another cycling enthusiast.
We’ve seen Dwyane the basketball player, Dwyane the humanitarian, and if you include his print ads for Sean John, we’ve seen Dwyane the pretty face.

The Spike Lee commercial is supposed to introduce the public to the off-court human side of Wade. What is he thinking? Why does he do what he does? Who is he? It’s kind of like Spike Lee is Lois Lane and Dwyane is Superman. Sorry Shaq.

I really like that Carmelo commercial with Jim Boeheim lurking in the shadows when he walks down the Baltimore street. Pressure’s on you Spike. I watched The Inside Man over the weekend, and I liked it alot. Give us another classic.